Why Are So Many Christians Afraid Of Dating? 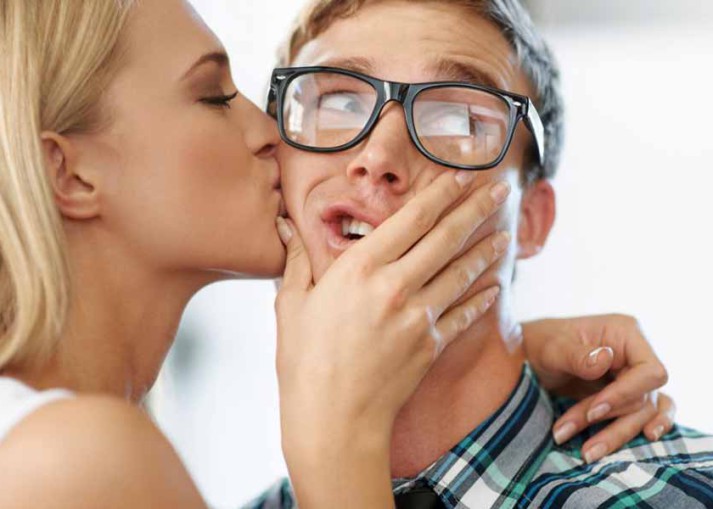 Once upon a time, I freaked out about dating.

I was that Christian single girl who jumped on the bandwagon of kissing dating goodbye- except of course for dating Jesus.

I repressed my desire for dating and relationships with the opposite sex, and decided that courtship was the “holier” course of action for my life.  I bought into the lie that instead of actually DEALING with my fear of failure, or my fear of making mistakes, I could just sit back and do nothing, and pray that God would magically bring me a spouse.

Interacting with the opposite sex became this pressure-filled, awkward, sinful-feeling give and take that left me feeling confused, impatient, and totally lacking control.  I bought into the theory that dating was wrong and that the only way to find God’s one and only match for my life would be to wait for some sort of sign from God. Wasn’t that what it meant to have real faith?

In walks Mr. Prince-Somewhat-Charming.  He initiates, and I respond.  That’s how it’s supposed to work, isn’t it?  (You bible-belt kids know exactly what I’m talking about!)  So excited to finally meet a man who pursued me I jumped at the chance to enter into a relationship with him.  I did everything right, so this MUST be right, I thought to myself. But the longer the relationship progressed, the more I began to feel that this relationship was not the right fit for my life.

The problem with my immature mentality is that it left no room for error, and that’s how I’d been trained to think.  Afraid of failure and of playing the dreaded dating game, I decided to stay in a relationship for far longer than I should have. A relationship that caused heart-ache, heart-break, and a whole lot of wasted time.

Though I wish I could change my relationship history, my choices make sense in the context of my former belief system.  I mean, the world of dating can be hard to navigate for a Christian.

First of all, Christian society and the Church at large hasn’t added much to the conversation. We’ve created a “fear culture” around the topic of dating. We hardly talk about it, and then when we do it’s all fire and brimstone freaking us out about choosing the wrong person to marry and waving the divorce rates over our heads. Add to that our parents – the baby-boomer generation – haven’t necessarily been the ideal role-models to depict a healthy, loving, marriage. So, we look to the world…

There, we’re bombarded by a culture that defines dating as this feel-good, romantic, emotionally-driven, sexual experience.  If something feels right, do it.  If someone feels right, do them.  It’s a culture that embraces pleasure and passion as the foundation of relationship.  Commitment is trumped by chemistry and loyalty is replaced with lust.  It’s a mentality that tends to live in the moment, forsaking the building of a future.

It’s no wonder that Christians tend to freak out about dating.  And it’s no wonder we’re dealing with the highest numbers of single men and women we’ve EVER had in our country. We spend years pouring fear into their lives surrounding the topic of relationships, and then wonder why everyone’s still single!

Rather than trying to navigate through the world of dating in a healthy way, we either avoid it, or continue to do it in an unhealthy way.

But the truth is, God never intended us to live in fear, but rather in faith. God’s word reminds us that perfect love casts out fears. Not only that but in this world God has given us all the wisdom we need to live by faith! Wisdom and faith always go hand in hand. That includes every part of our life, including dating.

As I began to ask for wisdom in the area of dating and relationships, I began engaging in the balancing act between the world’s perspective of dating vs. the “Christian” perspective of dating, I found myself empowered and my relationships enhanced. I finally felt that I was able to take control of my life and relationships, rather than allowing my culture and sub-culture to take control of me. When it came to striking the right balance, I finally stopped freaking out when I began to consider these concepts in light of my relationships:

1. Date to know Yourself better:  A crucial component to finding a healthy relationship is the concept of getting to know yourself.  You can’t know what you want or what you need in a relationship until you get to know who you are.  It’s important to begin this journey long before you are in a dating relationship, but to then allow this process to extend into your dating relationships.

You can learn so much about yourself as you engage in relationships with the people around you.  Use this time to reflect on who you are, what you want, and where you are going.  See your interactions as a reflection of your strengths, weaknesses, actions and reactions.  Be observant and aware so that you can use each and every relationship in your life to become a better version of yourself.

2. Take it one date at a time:  Everything good in life happens as a result of time.  Like a beautiful blossom- growth, intimacy, and commitment in a relationship are all things that require life’s natural unfolding to bring them into full bloom.  If time brings things into fruition, why do Christians psyche themselves out into thinking that they have to know if that person is “the one” within 24 hours of meeting them!  Talk about some serious pressure.   It’s no wonder she’s afraid to text him back, and he’s afraid to ask her out for coffee.

Maybe it’s time to relax a little, and trust God to lead you into the right relationship one step at a time.  If you are following His leading, waiting for His peace, and trusting the internal wisdom He’s given you- one step at a time will always lead you into the right direction or guide you out of the wrong direction.  You don’t have to know if they’re “the one” as long as you’re in tune with the Almighty One.  So have faith…and then take the next step.

3. Date toward no regrets:  Though the modern concept of dating is not mentioned in Scripture, principles of interacting with one another are littered throughout.  Applying these standards to your actions and interactions will give you guidance and direction in interacting with the opposite sex with no regrets.  We are called engage in relationships that are mutually edifying, encouraging, and uplifting (1 Thess. 5:11).  We are asked to refrain from arousing our sexual desires prematurely, reserving them to be expressed in a permanent covenant relationship through marriage (Song of Solomon 8:4, Hebrews 13:4, 1 Thessalonians 4:3).  We are encouraged to see everything that we do in life as an opportunity to glorify God (1 Corinthians 10:31).  Why not see dating as just another means to this glorious end?

After some self reflection, I finally realized that I was using dating as the scapegoat, rather than addressing my baggage, my fears and my deep-seated insecurities. When I finally came to terms with the reality that dating was not the enemy, I was freed to address my own sinfulness and take accountability for my interactions with the opposite sex.  At the end of the day, I realized that by making willful decisions, I could take control of my relationships rather than allowing them to take control of me.

Christians, it’s time to change the subculture that we have created that cringes in fear at the thought of interacting with the opposite sex, because we’re teaching the next generation to live in fear, not in faith.

It’s time to stop freaking out about dating and see it as an opportunity for growth, insight, and right relationships. It’s time to take the pressure off of “finding the one” and instead learn to glorify The One through every single interaction that we have with the world around us. Dating included.