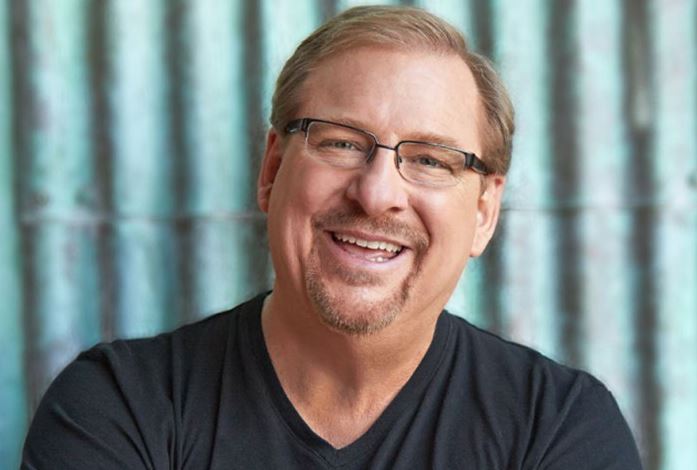 Dr. Rick Warren is passionate about attacking what he calls the five “Global Goliaths” – spiritual emptiness, egocentric leadership, extreme poverty, pandemic disease, and illiteracy/poor education. His goal is a second Reformation by restoring responsibility in people, credibility in churches, and civility in culture. He is a pastor, global strategist, theologian, and philanthropist.

As a pastor, he founded Saddleback Church in Lake Forest, Calif., in 1980 with one family. Today, it is an evangelical congregation averaging 30,000 weekly attendees, and has more than 300 community ministries to groups such as prisoners, CEOs, addicts, single parents, and those with HIV/AIDS. Recently, the church fed 42,000 homeless people – three meals a day – for 40 days.

He also leads the Purpose Driven Network of churches, a global coalition of congregations in 162 countries. More than 400,000 ministers and priests have been trained worldwide, and almost 157,000 church leaders subscribe to the Ministry ToolBox, his weekly newsletter. His previous book, The Purpose Driven Church is listed in “100 Christian Books That Changed the 20th Century.” Forbes magazine called it “the best book on entrepreneurship, management, and leadership in print.”

As a global strategist, Dr. Warren advises leaders in the public, private, and faith sectors on leadership development, poverty, health, education, and faith in culture. He has been invited to speak at the United Nations, the World Economic Forum in Davos, the African Union, the Council on Foreign Relations, Harvard’s Kennedy School of Government, TIME’s Global Health Summit, and numerous congresses around the world. TIME magazine named him one of “15 World Leaders Who Mattered Most in 2004” and in 2005 one of the “100 Most Influential People in the World.” Also, in 2005 U.S. News & World Report named him one of “America’s 25 Best Leaders.”

As a theologian, Dr. Warren has lectured at Oxford, Cambridge, the University of Judaism, the Evangelical Theological Society, and numerous seminaries and universities. His six books are known for explaining theology in understandable ways and have been translated into more than 50 languages. Dr. Warren says he teaches theology without using theological terms and telling people it is theology. His latest book, The Purpose Driven Life, has sold 32 million copies and is the best-selling hardback book in American history, according to Publisher’s Weekly.

As philanthropists, Rick and Kay Warren give away 90 percent of their income through various foundations: such as Acts of Mercy, which serves those infected and affected by AIDS; Equipping the Church, which trains church leaders in developing countries; and The Global PEACE Fund, which fights poverty, disease, and illiteracy.