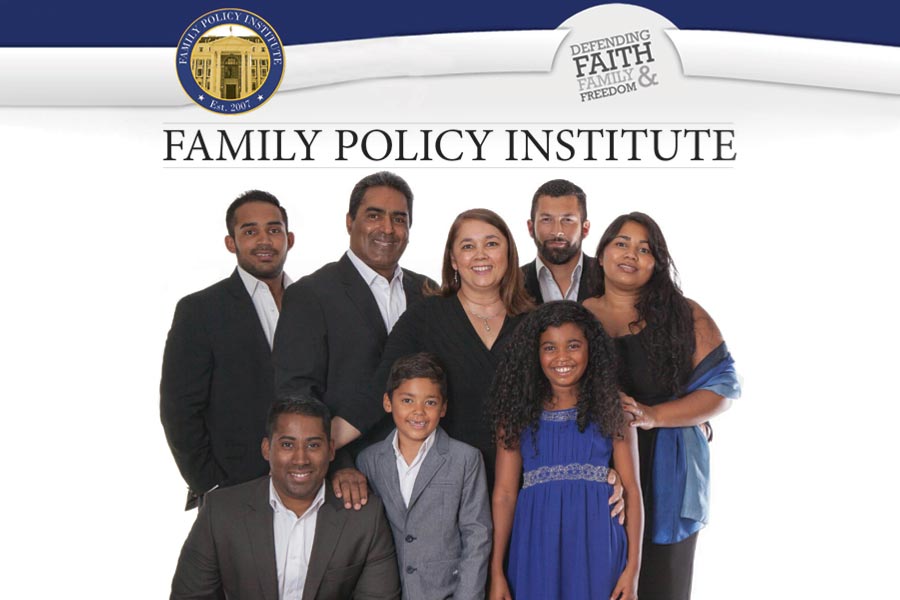 Family Policy Institute (FPI) celebrated its 7th anniversary on 7th July 2015. The ministry was established in 2007 but only started operating in South Africa on 7th July 2008. When I reflect on our humble beginnings in Parliament Street, Cape Town, I stand in awe of God’s faithfulness, guidance and supernatural provision. Following a six month training mission with Family Research Council in Washington DC in 2007, Arlene and I returned home and established FPI with nothing else but our faith. God honoured our faith and guided us to success.

FPI was established to defend the natural family and advance Biblical values in Parliament, the media and general society. I am grateful to God for helping us fulfil this vital mandate. Over the past seven years I have made several submissions to Parliament on legislation affecting the family. I also met with various cabinet ministers to discuss the development of public policy that protects and strengthens the family.

Keeping the Church informed
My primary calling is to serve the Body of Christ to help fulfil its Biblical mandate to be “salt and light” to society. During the past seven years I have ensured that the Christian Church was reliably and truthfully informed about critical social and political issues. I learned that an informed Church is an effective Church.

For example, there was an agenda to decriminalise prostitution prior to the 2010 World Cup. The South African Law Reform Commission (SALRC) was tasked with soliciting public comment on Prostitution Law Reform and making recommendations to Parliament. However, as part of a public awareness campaign initiated by FPI, we informed Christian citizens across the country about the real dangers of decriminalised prostitution. As a result, thousands of Christians made compelling submissions to the SALRC that defeated the agenda to decriminalise the sex industry in South Africa.

Ministry highlights
In 2009, I confronted blatant blasphemy of the Name of Jesus Christ in the media. I exposed a despicable incident of blasphemy in UCT’s annual Rag Magazine in my weekly Watchmen on the Wall newsletter. The response was phenomenal. UCT and the magazines’ sponsor, Pick ‘n Pay, received thousands of emails from Christians across the nation and the world. This incident sparked a national media debate about whether free speech protects blasphemy. Pick ‘n Pay immediately pulled the offensive magazines off their shelves. Both the retailer and UCT issued an unconditional apology to Christians in South Africa and vowed never to publish blasphemy again.Other highlights include the National Awareness Campaign initiated by FPI prior to the World Cup in 2010 about the dangers of prostitution and its links to human trafficking. We also compiled a research document entitled, ‘Why Prostitution Must Not Be Legalised or Decriminalised in South Africa’. FPI hosted a ground-breaking conference in July 2010 that investigated The Harm of Pornography on Society in partnership with the Film and Publication Board.

FPI also initiated and led national public campaigns against broadcasters, E-TV, Multi-choice and TopTV, discouraging them from broadcasting hard-core pornography on national television in South Africa. In 2011, FPI led a Mens March Against Violence Against Women and Children which submitted a list of demands to government to better protect women and children from sexual exploitation and abuse.

Religious freedoms
Attacks against the convictions and Biblical beliefs of Christians are increasing in South Africa. In 2013, a Christian training facility in Bloemfontein was investigated for “discrimination against homosexuals” because its training manuals contained the Biblical view on homosexuality. The pastor heading the facility was found guilty of “discrimination” by the Human Rights Commission (SAHRC) and ordered to undergo “sensitivity training” with a homosexual group. There are numerous other cases of Christians being hauled before the SAHRC or the Equality Court for alleged discrimination against homosexuals.

Taking necessary action
In 2013 I initiated a series of discussions with Christian legal professionals and senior denominational and Church leaders about the growing threats against religious freedoms in SA. We held three meetings in Pretoria and three in Cape Town. The vision for a Christian lawyers organisation called the Institute for Public Justice (IPJ) was birthed which could actively defend the religious freedoms of Christians and educate the Church about its constitutional rights.

In 2014 while participating in an international strategic workshop in the US, I bumped into Benjamin Bull, the International Director of Alliance Defending Freedom (ADF) – the largest and most powerful Christian lawyers network in the world. Following a 40-minute discussion, Benjamin agreed to send his deputy, Roger Kiska to Cape Town to meet with the South African lawyers. Discussions continue with a vision to establish the IPJ in South Africa with a working relationship with the Alliance Defending Freedom internationally.

Reaching more people through media
FPI was established to promote a Biblical and pro-family philosophy of life in society. We enjoy a degree of success in Parliament and general society but struggled to convey our message through a biased liberal mainstream media. In September 2012, God gave us our own media platform to proclaim the truth in South Africa. Watchmen on the Wall, the nation’s first current affairs television programme from a Biblical perspective was launched on the TBN Africa channel (now called Faith Broadcasting Network) on DSTV channel 341. Watchmen on the Wall was launched with a loaned TV crew on 4 September 2012. Today, just three years later, we are blessed to have a talented and hard-working TV crew and a fully equipped television and sound studio in Cape Town.

God gave FPI a vision to impact and influence society with Biblical truth through the media. In July 2015 we launched the weekly Watchmen on the Wall Radio half-hour radio programmes on 25 Christian radio channels across the country. The radio programmes extend our reach to millions more Christians and helps fulfil our mandate to keep the Body of Christ truthfully and reliably informed about key issues in society.

International alliances
In 2012, Family Policy Institute became a partner-member of the World Congress of Families, the largest network of pro-family organisations in the world. Being part of this powerful global network has significantly improved our ability to analyse and respond to threats against the family. FPI also enjoys access to some of the world’s best research and social studies on family issues.

My wife, Arlene and I were privileged to participate in four major WCF events where we networked with the world’s leading pro-family advocates. The first was in Madrid, Spain and the second in Sydney, Australia. One of the most memorable events we participated in was the International Forum on the Family in Moscow, Russia last year. I spoke on the topic of South Africa’s lack of pro-family policies. Arlene and I participated in a discussion on international family policies in the Russian State Duma and also at a pro-family event in the Kremlin.

In October 2014, Arlene and I were invited to participate in an international strategic planning workshop in Salt Lake City, Utah on The State of the Family. The leaders of pro-family organisations representing approximately 80 nations shared an incredible amount of knowledge. We learned much about the global threats against the family, including the best forms of response to these threats. Following this workshop, Family Policy Institute became a member of the Family Rights Caucus at the United Nations (UN). Most of the anti-family language included in UN resolutions is as a result of consistent lobbying by powerful sexual rights activists groups. The Family Rights Caucus works diligently at the UN to protect the natural family and prevent destructive anti-family resolutions from being advanced at this global body.

Defending God’s plan for marriages
In 2014, FPI was invited to join the Global forum on Marriage (GFM) in Washington DC. GFM is an international network of organisations working to defend and promote marriage as a union of one man and one woman. The second annual GFM was held in Paris, France in March this year. Incredibly, Cape Town, South Africa was designated the third host country for the Global Forum on Marriage in March 2016. This means FPI will host some of the world’s leading international pro-marriage advocates, activists, academics, scholars and legislators in Cape Town next year.

I am grateful to God for His supernatural provision. Whenever Arlene and I have been invited to participate in an international conference, our travel and accommodation costs were always sponsored by the host organisation.

We are so grateful!
God used the ministry of Family Policy Institute in many more profound ways to advance His truth in South Africa. Space limitations do not allow me to document them all. I am grateful to God for the support of my family and for blessing me with a talented and hard-working team. Thank you Dieter and Carol Lubbe, Taryn Ulster, Mario Brown and Henry Fisher for making the dream a reality. I am thankful to God for the many invitations I receive to minister around the country. These platforms allow me the opportunity to personally inform and educate the Body about what is happening in our country and their role in confronting it.

I am also deeply grateful to the faithful partners and friends of this ministry. Over the past seven years, FPI achieved much to defend and promote faith, family and religious freedoms. But none of it would be possible without the loyal support of our partners. Your financial support helped FPI grow from a small ministry in 2007 to one of the nation’s leading pro-family organisations in 2015. Arlene and I and the team at FPI expect greater things from God in the next seven years. We want you to be part of what God is doing in this nation. We will continue standing for God’s truth in South Africa. Thank you for standing with us.