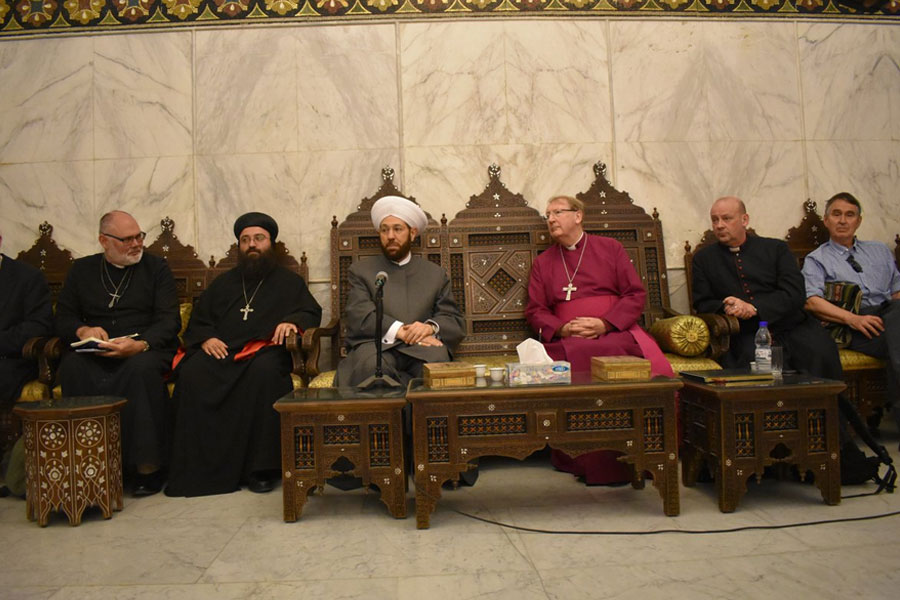 Bishop Happy “To Be A Useful Idiot For Christ”

Bishop Michael Langrish, the former Bishop of Exeter, was part of a group who visited Syria over the period of the Allied Bombings of chemical weapon installations. The Daily Mail called the group “Useful Idiots”. He spoke of his visit with Chris Sugden.

CS  Given that the conflict in Syria is becoming Iran versus Israel,  with Syria as a platform for Iran, what did you gain of the views of the churches about the struggle in and for Syria?

ML It’s more than a struggle between Iran and Israel. There’s a world war going on in Syria at present with so many parties using proxies. There’s Iran, Israel, UK, France, USA, USSR and Turkey.

The former Prime Minister (2000-2003) Muhammed Mustafa spoke to me of the instability on four of Syria’s borders: the north with Turkey and the deep fear of Turkey’s Ottamanistic territorial ambitions. There is a great fear of what Turkey intends, not least among the Armenians who have a history and a memory. There is the continuing unstable situation in the Lebanon with Hezbollah, Iran and Israel playing out their conflict by proxy. There is the instability in Iraq and the absolute terror among all the Christians that we met that should the West enforce regime change they could end up in the same situation as Iraq where many Christian communities are completely desolated. The fourth border is with Israel/Palestine itself where the big powers again have a vested interest.

The churches see Christian communities declining across the Middle East and fear that the same is going to happen in Syria. Already in parts of Syria the numbers of Christians have been halved. Homs’ governorate was the largest concentration of Christians. They have seen a tremendous exit internally down to Damsacus, out to Lebanon but also to the Syrian diaspora here and in the United States. The fear is that their young Christian people will go and won’t come back.

Young Christians whom I spoke to have two aspirations. They want education in order to get the skills necessary to rebuild the new Syria and want to be part of it. Their second concern is the about the destruction of the whole of Syria and their own communities which is affecting inter-community relations.  It was said to me: “We have imported Wahhabism into Syria. It did not exist here before. There has been a radicalization of a whole generation of Muslims that is going to take two generations to row back from.”

CS There was criticism in the British press that your visit was giving comfort to somebody who was perceived to be not only authoritarian but also brutal.

ML We were there to bring comfort to the Christian community. There were seventeen of us in a mixed group of parliamentarians, clergy, journalists, heads of charities and artists and that was not picked up on by the press at all. We were all Christians there at the invitation of the Syrian orthodox patriarchate to come on a pastoral visit to listen and learn about their suffering and also a humanitarian one to see how we could support them in their response to a situation of great humanitarian need.

CS In the west you were seen as apologists for Assad.
ML  Syria is an authoritarian regime.  The church everywhere finds itself having to make certain political decisions. We do it here. You cannot say that here the church never accommodates itself to prevailing culture. The church is trying to remain faithful to Christ. By remaining there they remain faithful. They take the long view. As someone said: “We are the church that received St Paul. We are the church that wants to go on receiving new converts to Christ.” So they wish to continue to be there. We were there to comfort the church.

The scripture that really spoke to me – it was part of Morning Prayer one morning – is where Paul talks about the way in which we suffer within the body the same affliction that we might also suffer the same consolation. I was struck by the way when we Christians in the West cut ourselves off out of political correctness or fear that we might be lampooned , when we cut ourselves off from the afflictions of our brothers and sisters in Christ, we also cut ourselves off from the extraordinary consolation of grace that God wishes to give us through them.

I think it was the Daily Mail who actually called us “Useful Idiots”.  That is a description with which I can happily live. That is precisely what a bishop ought to be – a fool for Christ’s sake.  Paul said “I am determined to come among you to know nothing but Christ crucified.” And if I can be a fool for Christ’s sake and so be useful for the kingdom, for the gospel and for my brothers and sisters in Christ, so be it. I believe that is my vocation.

CS  What was the response of the churches to the Allies taking out the supposed chemical warfare installations?
ML  Appalled.  There were those who were appalled that there should be bombing anyway. There were those who were appalled at the timing of it.  I thought the timing was absolutely wrong because there were too many unanswered questions.  Two or three days in my position was on balance that it ( the gas attack) was the Assad regime. But there were so many unanswered questions you could not justify the bombing. By the end of the week on balance it was probably not the Assad regime.  It simply does not make sense.   For the USA, France and the UK to have bombed before the questions could be answered was the worst of militaristic gesture politics. Six months down the line Syria will be no different except that the questions that are being faced will be even harder.

Also we love to pontificate about the lack of democracy in Syria. Let’s not forget that it was the nation that seemed to be most gung-ho about these attacks, France, that snuffed out genuine Syrian democratic government. In 1941 the Free French declared the independence of Lebanon and Syria. Syria had free and fair elections. The nationalist block list won with aspirations for a genuine western democracy. In 1945 General De Gaulle was determined that they should not have true independence, refused to hand over command of the forces, and when the Syrian government protested, the French stormed the Parliament building, attacked Government offices and bombed residential areas of Damascus. Plus ca change. Long memories in Syria think back to that. They aspire to a genuine democratic system but they are deeply suspicious of those powers that for a hundred years have sought to play out their own agendas in Middle Eastern politics.

CS What main findings will you report?
ML  I was there because of my connection with a number of Middle Eastern Charities. There is a desperate need for help on the medical front.  We are constantly told that sanctions do not affect supplies of food and medicines. That is simply not true. While food and medicines may not be on the embargoed list, the complete collapse of the international banking system means that Syria is entirely a cash economy and the all-power of the dollar makes getting access to a lot of medicines quite difficult.  A lot of hospitals have been trashed. In Aleppo, the best hospitals, the University Hospitals, were looted and much of their equipment taken back to Turkey. A lot of doctors and nurses have lost their lives in the conflict. There is a desperate need for medicines, medical education and the re-equipment of hospitals.

Secondly, a high level of education has always distinguished Christians in the Middle East. They want to have access to the education that will give them the skills to enable them to remain to rebuild for the future. Many schools and universities have been destroyed in the conflict.

Most challenging is the political cack-handedness of the Syrian government. In an authoritarian system the space for public political discourse has been very limited. One governor said to me “We have got to find a better way of responding to the aspirations of ordinary people.”  They need help with building up the institutions of civil society, of increasing the stock of social capital and of enabling mature political discourse. Syria is not going to accept such help from other governments – there is too much suspicion – but from charities and churches. I think of the part played by different churches in Mozambique, Rwanda, Senegal, and South Africa.

Visits like ours are important as Churches and charities need to be building relationships now to establish the platform for the kind of humanitarian and civic rebuilding that will be required. In 1945 British and Irish Church leaders were already planning for what became Inter-Church Aid then Christian Aid to help with the rebuilding of Germany.  It was due to people like George Bell and others who were beginning the conversation even before the war began.

I said while we were there: “I’m not here as a politician. There are politicians here you can talk to. I’m here as a Christian bishop and as a patron of a number of charities. I am interested in what happened in the past, and in the rights and wrongs of where we are, but I’m even more passionately interested in where we go to from now, how we build a peaceful secure future for Syria and the Middle East, and how to help these young people, particularly young people in Christ, to grow into the human beings that God longs for them to be. “