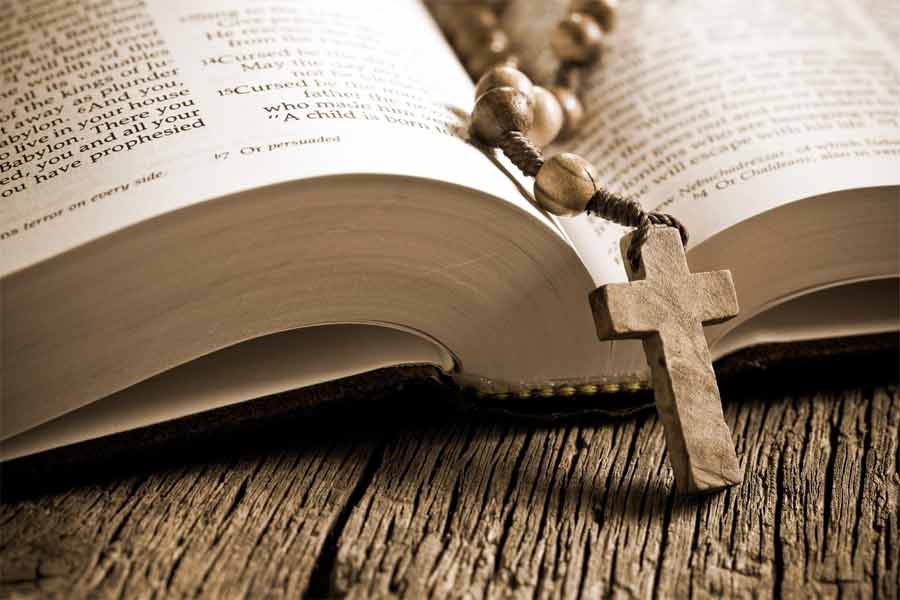 On the fifth of May Sixteen Eleven,
We received God’s Word heralded from Heaven.
Published for us as the King James Bible,
Distributed liberally to every believing disciple.

For seven years since Sixteen O’ Four,
Forty seven translators took up the chore.
Along with Shakespeare and the Holy Spirit,
Forty nine in total to whom can bear merit.

King James of Scotland, Great Britain and Ireland;
Wanted to evangelise every nation spiritually darkened.
Written in English the ancient mother tongue,
For royalty, the servant, the maiden and the young.

The English language hewn out from her seven pillars,
All layered together like rainbow colours.
First the Greek and then the Latin roots,
Next the nether lands gave it her shoots.

The German and French enhancing her dialect,
Along with Gaelic and Nordic making them all connect.
Seven languages in total building her foundation,
For so God moved over every heathen nation.

The King James Bible was the seventh edition,
First was Wycliffe and then Tyndale’s version.
Followed by Coverdale and then the Great,
Geneva and Bishops can all together relate.

With God’s Word now permitted in every home,
The Holy Spirit throughout all Britain did roam.
For as silver is purified seven times in a furnace,
So God’s Word was warmly received in earnest.

As seed scattered in the farmer’s field,
So did many hearts unto the Gospel yield.
From lowly paupers to the princes in the palace,
All treasured the Word like a golden chalice.

Bard’s such as Shakespeare were spiritually inspired,
Today his plays and sonnets are still admired.
John Donne and John Milton both soon followed,
Their hymns and odes anointed and hallowed.

From Paradise Lost to Paradise Regained,
God’s Word richly understood and explained.
Henry Vaughan authored Beyond the Veil,
Where our souls shall soar and set sail.

John Bunyan penned Pilgrim’s Progress,
The story of Christian allegory to digress.
From this world to that which is to come,
May we fervently pray God’s will be done.

In Solitude and in his own surround,
In winter fire quiet by day with no sound.
With meditation translated Alexander Pope,
Happy the man who’s every care has hope.

Patriotic James Thomson with resolute mania,
Asked God to rule the waves and Rule, Britannia.
The best modern poet arguably William Cowper,
If his peers were the buds he was the flower.

Sir William Jones both knighted and a mason,
On Parent Knees raising a new generation.
Teaching them to live for tomorrow they sleep,
Smile today for all around you they weep.

The Lamb, the Tiger and Jerusalem;
All bestowed with William Blake’s holy emblem.
What could frame their mortal symmetry?
For it is through the cross for you and me.

My Heart’s in the Highlands by Robert Burns,
Where will yours be when the Lord returns?
William Wordsworth with his many odes,
Expressing God’s way upon London’s roads.

Kubla Khan, Samuel Taylor Coleridge’s forerunner;
Before the tale of the Rime of the Ancient Mariner.
The Destruction of Sennacherib by Lord Byron,
Of the angel of death and its piercing siren.

Thomas Ingoldsby and his Jackdaw of Rheims,
That flew above the congregant gents and dames.
For the bishop, the abbot and friar did all stare;
When the Jackdaw sat on the cardinal’s chair.

At the benediction it would give a great “caw!”
“Never had they known such a pious Jackdaw!”
So the conclave met for him a noble to bestow,
And they canonized him and called him Jim Crow!

So too did John Keats consider a bird,
Ode to a Nightingale which fleetingly stirred.
Thomas Hood of whom you may Remember,
The finest English Poet when his peers were together.

A Psalm of Life by Henry Wadsworth Longfellow,
Should every believing brother boldly bellow?
For life is real and time is fleeting,
So leave behind footprints in whatever you achieving.

The Bells and the Raven wrote Edgar Allen Poe,
What was their connection, what did he know?
For bells toll and obediently keep the time,
And the ravens fed Elijah by command of the Divine.

Lord Tennyson’s Charge of the Light Brigade,
Rode the six hundred with gun and blade.
Through the jaws of death and out the mouth of hell,
With horse and hero they had fought so well.

Onward he writes of Ulysses in the wooden horse,
Toward it was pushed for Troy was its course.
His son Telemachus he gave sceptre and isle,
For travelling and learning gave the king a happy smile.

And of ships lest we forget the Birkenhead,
For Sir Francis Doyle told of its resting bed.
For the brave men let woman and child go instead,
As they patiently await the resurrection of the dead.

Robert Browning and How he brought the Good News,
To always keep your promise however you choose.
For in his parable of the Pied Piper of Hamelin,
He had all the residents of Brunswick trembling.

For he was summoned to cleanse the vermin for a tidy fee,
But broke their promise when they no longer rats did see.
So the Pied Piper returned after executing his former task,
And all the children followed him upon hearing his blast.

About Sister Helen wrote Dante Gabriel Rossetti,
Was neither bride nor married under confetti.
And between Hell and Heaven she shed no sleep,
O mother and oh Mary for me don’t you weep!

Lewis Carroll born Charles Lutwidge Dodgson,
Anglican Deacon and English comedian of fun.
From Alice’s Adventures to Through the Looking-glass,
Things become clear when from this life we pass.

Shameful Death is writ by William Morris,
Though what he witnessed left no tune nor chorus.
But Two Choruses from Atalanta in Calydon,
Were recorded by Swinburne named Algernon.

Thomas Hardy sang of the Men Who March Away,
Family, friend and soldier to fight another day.
What of their faith and fire within them,
Do we stand back, watch and condemn?

And Weathers too at the travellers rest,
The maids and citizens dream of the south and west.
The Oxen now all on their bended knee,
On Christmas Eve this is how we should be.

England, my England wrote W.E. Henley;
What has that country done for you and me?
In Invictus and in Earnest it printed God’s Word,
And spread throughout her kingdom for it to be heard.

A Requiem under the wide and starry sky,
Did Robert Louis Stevenson both gladly live and die.
The name Ticonderoga for the utterance of the dead,
Seeking the eternal place of the name that was said.

Francis Thompson wrote of the Kingdom of God,
A world invisible, intangible, unknowable and odd.
But it is where the faithful angels keep their place,
Lo they watch over our souls and behold God’s face.

Born in England was Sir Arthur Conan Doyle,
Creator of Sherlock Holmes who could any crime foil.
Henry Newbolt’s tale He Fell Among Thieves,
His recalling of when a Good Samaritan leaves.

If you can keep your head and If you can dream,
Then it would not be a maybe but your theme.
And If at the end you have the distance run,
Rudyard Kipling believed you’ll be a man, my son!

William Butler Yeats and his Lake Isle of Innisfree,
But which inn is free except my Samaritan pay for me.
For Yeats brother and cousin read the book or prayer,
But he was too busy dancing and playing The Fiddle at the fair.

When at the end of life they saw Peter sitting in a state,
As all three friends arrived together at his pearly gate.
For they were not wearing Heaven’s embroidered Cloth,
So they would negate the narrow path and face God’s wrath.

G.K. Chesterton’s description of the labouring Donkey,
With a monstrous head and errant ears that were wonky.
But once an old prophet unto the jackass did speak,
Now between the sage and this mule who was the freak?

Alfred Noyes wrote of The Highwayman that came riding,
Suddenly out of the moonlight he came from hiding.
And over the cobbles he clatters and clangs,
And upon the old inn-door he batters and bangs.

For he has come for you and he is rearing to go,
Do you blindly follow or rightly say no.
For today he masquerades without offence,
But if he were the devil would you spot the difference.

An eminent Jewish Philosopher of the Middle Ages,
Rabbi Ben Ezra who studied the Torah for his wages.
Noted God is the potter and man is the clay,
Our soul is immortal and fashioned each day.

So each day when we read God’s Holy Word,
We breathe in His Spirit into our every sinew and chord.
And when we exhale that is how we ought to pray,
Do not care for tomorrow for God will prepare us today.

Each of these dead poets received from God’s seed,
And each was a tool of God’s evangelism indeed.
As the seed scattered as in the parable of the sower,
For God is the giver and we are the borrower.

What has God gifted you in this lifetime to fulfill,
Is it gathering dust on the temporal mantle?
For each passing hour and every fleeting day,
Means less and less time to do and to pray.

So as you have read God uses us mortal man,
To proclaim and teach His supernatural plan.
All the Lord is looking for is a willing heart,
So lay aside your past and make a brand new start!