What I’ve Seen Through My Telescope 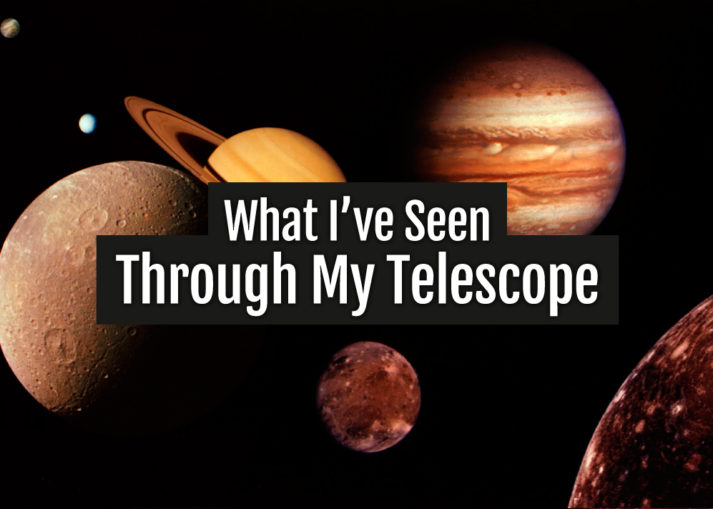 This is primarily the story of Professor David Block’s life and how the incredibly glorious book of general revelation (nature) pushed him towards the book of special revelation (Bible) and helped him see Jesus whose work he viewed through his telescope.

Questions about faith
I was raised in an orthodox Jewish family in Krugersdorp, South Africa. Sitting in shul (synagogue), I would be enthralled as our rabbi expounded how God was a personal God. God spoke to individuals such as Moses, Abraham, Isaac, Jacob—and many others. I pondered much how I fit into all this. By the time I entered university, I became deeply concerned that I had no assurance that God was indeed a personal God. I did know that He was a historical God and that He delivered our people from the hands of Pharaoh. But, He seemed so far removed from me in Krugersdorp. Where was the personality and the vibrancy of a God who could speak to me? 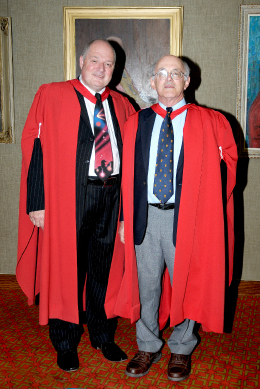 The authors of GOD AND GALILEO, Professors David Block and Ken Freeman (Australia). Both are Fellows of the Royal Astronomical Society of London

Something was missing
While still a student at the University of the Witwatersrand, Johannesburg, I began studying for my bachelor of science degree in applied mathematics and in computer science. I became friendly with the late Lewis Hurst, then a professor of genetics and medicine, who lived in Krugersdorp. He had a great interest in astronomy, and for many hours we would discuss the complexities of the cosmos. I would delight in explaining to him fundamentals in astronomy, such as black holes and quasars. Intellectually, I was satisfied. I became fascinated by the elegance of the mathematical formulation of general relativity, and I submitted my first research paper on that theme to the Royal Astronomical Society of London in 1973 (at age nineteen); it was published in London one year later. How humbling it was for me to receive requests from observatories and universities for reprints or printed copies of that research paper; requests from academics in Canada to Israel to the UK to New Zealand were invariably addressed to “Dr David Block”—little did anyone know my age and that I was merely a “Mr”! Intellectually, I was so stimulated, but questions within me gripped me. Inwardly, something, or Someone, was missing.

As an astronomer, I have seen God inextricably involved in my research.

Questioning why we are on this earth
Back in South Africa, my friendship with Professor Hurst grew—and I started sharing my thoughts and feelings about the cosmos with him. To be brutally honest, I did not know God. I shared my doubts with Professor Hurst. Are we, as Shakespeare said, just a fleeting shadow to appear and then disappear? What is our purpose for living? What is the raison d’etre for being here? Was it possible to ever have a personal encounter with the Creator of the cosmos?

A revelation
Strangely, standing in the grounds of my parents’ home in Krugersdorp, where I aimed my first telescope at Saturn —when I actually viewed Saturn in all its majesty and splendour, with its tilted system of rings—I just knew that there was and is a Great Designer. In fact, somehow I knew that there must be a personal God, but I had not yet experienced His still small voice of forgiveness and of reassurance in my heart.

“Intellectually, I was so stimulated, but questions within me gripped me. Inwardly, something, or Someone, was missing.”

The start of a journey
An unusual turn in the story then followed. Professor Hurst asked me to meet a close friend of his, the Reverend John Spyker. We met at his manse in Johannesburg. The voice of the Reverend always commanded attention, for he spoke with authority. He took his Bible in his hands and turned the pages to the New Testament—in particular, to the apostle Paul’s letter to the Romans. In Romans 9:33, Paul affirms that Yeshua (Jesus) is a stumbling stone to my Jewish people, but that those who freely choose to believe in Yeshua will never be ashamed. 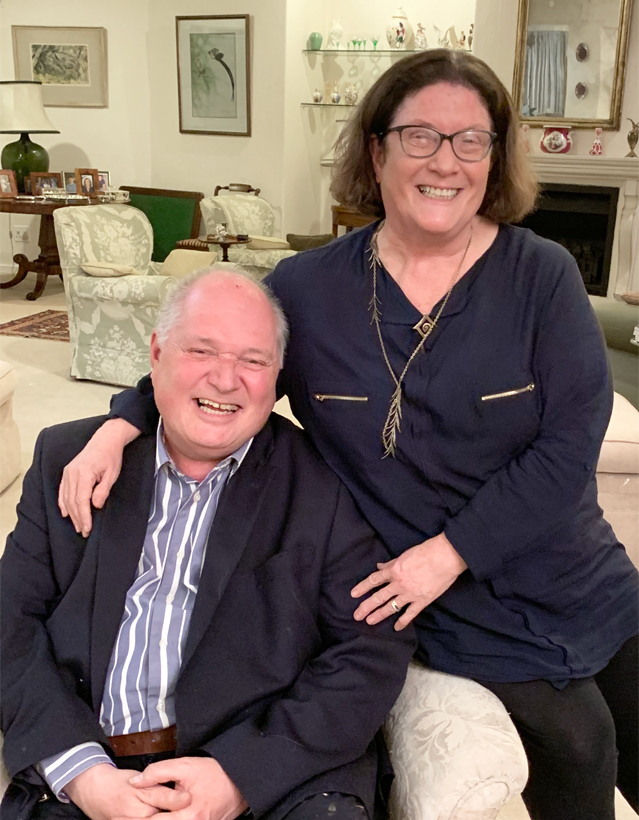 David and Elizabeth Block in Johannesburg. David and Liz are Jewish believers in Jesus and have been married for 37 years

Meeting Jesus
Some words literally jumped out at me: “As it is written, Behold, I lay in Sion a stumbling stone and rock of offense: and whosoever believeth on him shall not be ashamed.” For those who prefer a more modern rendition of this verse, The Message version reads, “Careful! I’ve put a huge stone on the road to Mount Zion, a stone you can’t get around. But the stone is me! If you’re looking for me, you’ll find me on the way, not in the way.” Zion. My Biblical home ground!
By divine grace, it all suddenly became very clear to me. Yeshua was the stumbling stone. My stumbling stone. Jesus had fulfilled all the messianic prophecies in the Hebrew Scriptures (such as where the Jewish Messiah would be born, how He was to die, and much besides).

Jesus is the living Messiah
While many of my Jewish people were still awaiting the Messiah, I suddenly knew that I knew that Jesus is the living Messiah! All I had to do that day was respond to His grace. I immediately asked the Reverend to pray for me. I surrendered my heart and my reason to the Lord Jesus that day. The Spirit of Jesus infused every cell of my being. That was in October 1976. I was twenty-two.

Faith is based on evidence
It might seem strange to some that a young scientist, who was an orthodox Jew, should come to faith in Jesus. But faith is never a leap in the dark. As we read in Scripture, faith is based on evidence. The heavens declare the glory of God (Psalm 19:1). In my study of astronomy, I was immersed in the city of God ever since receiving my first telescope in high school in 1971. As a young man, looking at Saturn was a moment of deep revelation to me.

Faith is never a leap in the dark. Faith is based on evidence.

God’s Hand is in creation
In my chosen career as an astronomer, I have seen God inextricably involved in my research. Over the years, I have travelled to and used telescopes at some of the world’s greatest Observatories, from Chile to Hawaii. He has given me the privilege of working, as a team, with some of the most gifted astronomers alive. In the formative stages of my professional research career, whilst observing the shapes (morphologies) of galaxies, with their dark and pervasive clouds of cosmic dust, God had highlighted one specific verse to me from the book of Isaiah: “And I will give thee the treasures of darkness, and hidden riches of secret places, that thou mayest know that I, the Lord, which call thee by thy name, am the God of Israel.”– Isaiah 45:3, KJV

All to God’s glory
It was God speaking to me through the Scriptures by means of his Holy Spirit. Cosmic dust, dark cosmic dust grains, the material of which you and I are created (Genesis 2:7). Stardust! I have publicly shared this verse with audiences on innumerable occasions, for He has given me the insight to probe great treasures of darkness in our majestic cosmos! To His glory, and only because of His immeasurable grace, has our research featuring cosmic dust and galaxies twice been featured on the cover of the world’s most prestigious scientific journal called “Nature”.

The heavens declare the glory of God. (Psalm 19:1)

Spiritual revelations
As a teenager, standing alongside my telescope in Krugersdorp, I never knew I would one-day write a book titled, “God and Galileo”. I never dreamed that one day, atheism would masquerade under the mantle of science. In the midst of unimaginable ordeals, Galileo faced theologians at the Inquisition in Rome. I have personally visited the secret archives of the Vatican. Galileo upheld the powers of science and the powers of his telescopes turned heavenward. The shoe for me was on the other foot. Here I was, as a young scientist, upholding the power of the Scriptures! In our new book, we are careful to explain that the truth of nature (science) is not the nature of truth, which includes spiritual revelation.

God is a master
Academic careers may have their challenges, but again, God richly encourages. The word from God for me to focus upon was, “wells”. Others may try to stop up our wells of progress, just as in days of old: “Now the Philistines had stopped up all the wells which his father’s servants had dug in the days of Abraham his father, and they had filled them with earth.” – Genesis 26:15. God is a master of unstopping wells (John 4:14).

Enthralled by the grace of Jesus
The moral of the story in my own testimony is that I have faced influential Goliaths in my life, but my name is David. My personal experience has been that, by God’s grace, He has always set a table before me in the presence of my enemies (Psalm 23:5). Many years have transpired since I first stood alongside my first telescope in Krugersdorp. Those were the days of non-digital photography. Now all is digital. However, every time I look at images of the wonder of God’s creation—especially nowadays from telescopes in space transmitting images back to earth on computer screens—He quietly stands next to me. His grace is sufficient. My motto is simple: Never give up, look up, and try again. I remain enthralled by the grace and love of Jesus, the luminous figure of the Nazarene.

DAVID BLOCK is an astronomer, author and speaker. His latest book ‘God and Galileo’ is published by Crossway. David and his wife Elizabeth (who is also a Jewish believer in Jesus) celebrate 37 years of blessed marriage and they reside in Johannesburg, South Africa. They have three adult sons: Aaron and twin boys, Tevye and Nathanael.