The Spiritual Root Of The Coronavirus 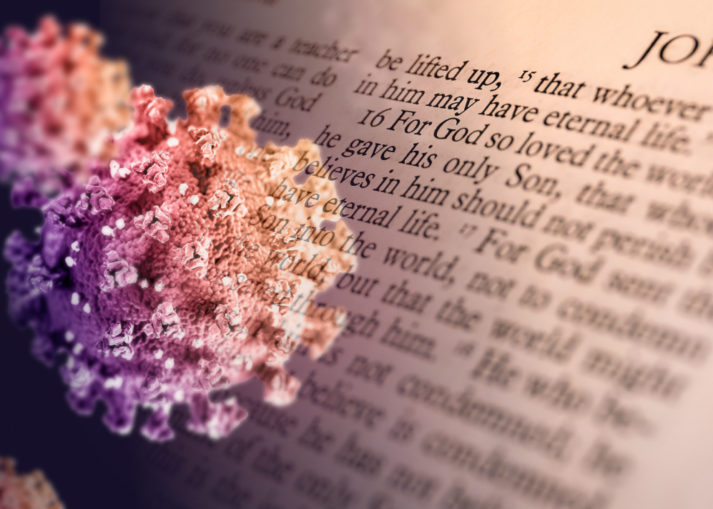 By now, everyone on earth has been impacted by the Coronavirus pandemic in some way. With the number of infections and deaths still rising and stock markets still crashing, people are beginning to seriously worry about not only catching the virus, but also whether they might lose their jobs, their pensions, and perhaps even their homes.

People are also looking for answers
How did this health crisis come upon us so suddenly and with such devastating effects? How long will it last? Where is God in this global crisis? And could this actually be a sign of the End Times? No one knows all the answers to these questions, but I would like to offer some key prophetic insights that shed light on how this happened, and why. I believe these biblical explanations actually lay at the spiritual root of the current Corona crisis.

Could we have predicted this outbreak?
First, there is a widespread sense that no one saw this coming. It is true that nobody predicted this particular viral threat arising from this specific source at this exact time and having these certain consequences. However, there have been ample credible voices of late predicting the outbreak of major viral threats to humans originating from animals.

For instance, when researching my book Floodgates, I ran across a recent edition of the US National Intelligence Council’s “Global Trends” publication that expressed heightened concerns about such uncontrollable pandemics. Before his passing, astrophysicist Stephen Hawking also stated one of his greatest fears was that mankind could be wiped out one day by a pathogen that jumps from animals to humans.

Pandemics over the years
It was easy to make these predictions because they have become rather commonplace over the past one hundred years. The grimmest example was the Spanish flu epidemic from 1918-19, which killed between 50 and 100 million people – at least four times more than had died in World War I. The origin of this viral beast was believed to be swine, or perhaps poultry. The Asian flu of 1957 was an avian influenza that likely came from ducks. The Hong Kong flu of 1968-69 was considered another strain of bird flu. In more recent times, we have seen the AIDS virus, Ebola, swine flu, and the earlier Coronavirus strains MERS and SARS. Each of these illnesses have been traced back to monkeys, pigs, or bats, and perhaps other intermediate host animals before they were transmitted to humans.

Based on this century-long record, we should be able to put to rest all these conspiracy theories floating around about the COVID-19 virus being deliberately cooked up in a lab by the Chinese or US military. I also am sceptical of claims made by eco-scientists that these pandemics are occurring because mankind has destroyed the natural habitats of wild animals. To the contrary, many of these viruses have come from domesticated animals.

Where is God in this global crisis? Could this actually be a sign of the End Times?

Why are animal diseases spreading to humans?
It also is quite evident by now that animal diseases and pathogens are jumping to humans more frequently these days, and scientists and medical researchers fear these viruses are mutating into stronger, more resistant strains at rates that will outpace our capabilities to defeat them. The question is why?

I believe the answer has a spiritual root or cause. It is because mankind has erased the line between us and the animals established by God in Scripture, and instead has come to view the human race as originating from animals. The Bible declares that humans are a special creation of God made in His image – the closest thing in creation to our Maker. We are of a higher order created separately by Him. But ever since the mainstream acceptance of Darwinian evolution, which coincidentally started around 100 years ago, much of humanity has abandoned this core principle of Scripture. We have denied the existence of God, taught only evolution in our schools, erased the line between us and the animals, and now are paying the price. So we should not be surprised when diseases lurking in animals suddenly start infecting us at alarmingly new rates.

Is this virus due to our own actions?
It also should not surprise us that this latest coronavirus originated in China. The Chinese Communist regime has been extremely lax about regulating scientific experimentation, especially in gene-editing and crossbreeding of humans and animals. In fact in August of last year – just months before the Corona outbreak – there were numerous reports of a team of scientists in China who had created a human-monkey hybrid embryo… a chimera.

Such actions are a serious violation of the natural order set by God, and the spiritual consequences are that we are opening ever wider a portal or gateway for deadly animal diseases to leap into the human race.

Is this opinion biblical?
The biblical basis for this principle can be found in the story of Noah and the flood. The flood story is found in Genesis chapters 6 to 9. It is closely related to the Creation account of Genesis 1, where God looked down on everything He created (plants, animals, mankind) and saw it was all “good.” Yet by Genesis 6, He looks down and sees mankind in open rebellion against Him. Man’s thoughts were “evil continuously,” the earth was “filled with violence,” and all flesh had been corrupted. Thus, the Lord decided to judge the ancient world through a global flood. Yet He waited 120 years before carrying out the judgement, giving time for His faithful servant Noah to build an ark to preserve his family and the animal kingdom, and also to warn the world of the looming judgement.

In Genesis 9:3-6, Noah was told mankind could now eat of all things, even the animals, just do not eat live flesh, with its blood. That makes more sense to us now that we know eating live animal flesh can bring lethal diseases. But this is more than a dietary law. The Lord adds that He will require an account from every life – the first place this important principle appears in the Bible. The passage also prohibits murder. But the rule goes deeper and is founded on the concept of Imago Dei – that mankind is a special creation of God made in His image.

We must draw a bold line between ourselves and the animal world.

What does this mean for us today?
Basically, this all means that we must draw a bold line between ourselves and the animal world. Mankind must treat every human life with dignity and respect, and maintain a high view of ourselves as the closest thing in Creation to God.

In a similar way, Adam was given one rule. He could eat of every tree in the garden except for one tree (Genesis 2:16-17). Adam also was warned of the consequences for breaking the rule – death entered the world!

What happens when we break God’s laws?
So what happens if we violate the one rule of the Noahide covenant? It means God would no longer be bound by His side of the covenant, and can severely judge the earth again – just not by water. This is why Jesus warned that the time of His second coming would be “as in Days of Noah” – Matthew 24:36-39.

Jesus takes this prophetic warning from Isaiah 24, which foretells of a time when the earth will be made waste and its surface distorted (v1); the inhabitants of the earth will be burnt and few men left (v. 6); the earth will split open and be violently shaken (v. 19). All this will be happening because mankind has “broken the everlasting covenant” (v. 5) – a reference to God’s covenant with Noah (see Genesis 9:16). In other words, Isaiah foresaw an ominous day when humanity would be in violation of the one rule of the Noahide covenant.

Jesus warned that the time of His second coming would be “as in Days of Noah.”

Jesus is coming soon!
In my book Floodgates, I make the case that humanity has been in breach of the Noahide command ever since the mainstream acceptance of Darwinian evolution. It is a direct refutation of the divine origin of man. Instead, it erases the line between humans and animals and says that we came from them. Among the spiritual consequences of this violation of the divine order is that we have opened ourselves up more and more to sickness and diseases lurking inside animals. And this pandemic is but one of the many birth pangs – with many other causes – which will usher the world into the Messianic Age.

Who is in control?
Our world also has used Darwinism to discard with God and any moral accountability to Him. In the process, the worship owed to God as our Creator necessarily must be directed somewhere else. Many elevate science and human intellect to the status of an idol, believing it can provide the answers to anything. Rather than repenting and calling on God for deliverance from the coronavirus threat, much of the world is trusting science and medicine to deliver the remedy to this plague. They are hoping some medical researcher will come up with a treatment or vaccine in time to save their job, their pension, and their home.

Science won’t prevail, God will
I am hoping and praying that God indeed will soon lift this dark cloud from over all of us. Yet even when it does lift, rest assured that science is not going to be able to save anyone from the wrath of God still to come.

Have Your Say
Do you agree with this article? Send your thoughts on the coronavirus to info@joymag.co.za

DISCLAIMER
JOY! Digital is a Christian portal that shares pre-published articles by writers around the world. Each article is sourced and linked to the origin, and each article is credited with the author’s name. Although we do publish many articles that have been written in-house by JOY! journalists, we do not exclusively create our own content. Any views or opinions presented on this website a