The Lord Says, ‘Tell Them To Prophesy The War Is Over’ 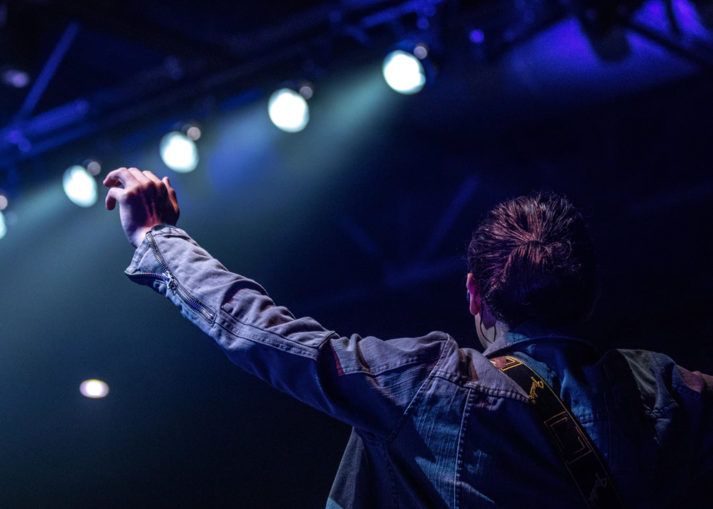 Recently, I woke up in the middle of the night with a strong urgency to intercede, so I began walking up and down the house, praying in the spirit and worshipping.

Then, after a while, I felt the atmosphere shift and I entered into warfare worship. I could literally feel the tension in the spirit of kingdoms clashing, and I could feel the roar of the Lion of Judah joining me in intercession. For a while, I kept on singing the line from Psalms 2:4:

“He who sits in the heavens laughs; the Lord ridicules them.”

I felt the justice and ferocity of the Lord so strongly, as if He was not even threatened by this plot of the enemy. I felt I should read the beginning of Psalm 2 and I found that, in my translation, the chapter is titled, “The CORONA-tion of the King,” which is interesting considering “corona” means “crown” or “crowned.” I believe that Psalm 2 is the Lord’s response every time the enemy wants to crown himself as superior by plotting against God and His people.

“Why do the nations rage, and the peoples plot in vain? The kings of the earth set themselves, and the rulers take counsel together, against the Lord and against His anointed, saying, ‘Let us tear off their bonds
and cast away their ropes from us.’ He who sits in the heavens laughs; the Lord ridicules them” (Ps. 2:1-4).

Intercession Over the Nations
I was then taken in the spirit over different nations of the earth, and was told to pray over each of them. I was given different directives and needs to pray about as I was led to each nation. I could see the countless tens of thousands of others praying with me, interceding and warring. This continued for a while until I finally ended up over the nations of the United Kingdom, and I saw an air raid taking place and people were dispersing in mayhem. I then yelled out, “Keep your posts!” Some continued to run, but many others began to stand up and pray and worship in unison. As they did, the bombs kept missing their marks and the planes turned around in defeat.

It was then that I heard these words loudly in my spirit: “Tell them to prophesy that the war is over!”

“These will wage war with the Lamb, but the Lamb will overcome them, for He is Lord of lords and King of kings. Those who are with Him are called and chosen and faithful” (Rev. 17:14).

As I was praying, I saw an image before me of the late and great Winston Churchill who led the United Kingdom to victory in World War II and, interestingly, was prime minister during the Battle of Britain and other raids against the nation, but had extraordinary favor and prophetic insight, and foiled the enemy many times. I asked the Lord why I was seeing Churchill’s face, and He answered me with a Scripture:

“Winston” means “wine’s town and joyful stone,” and Churchill simply means “the church on the hill!”

I believe God was revealing that what seems like war and battle is actually the church’s time of awakening, rising and shining. We are the new wine carriers, marching into the land with joy set before us; fixed, focused, immovable and ready to rise to the task at hand and the hour we were born into.

The Awakening, the Birthing and the Outpouring
Whether we like it or not, we have crossed over into a new kairos season, a significant moment of history that always demands from us—the church—a personal and corporate decision to either back down or rise up. You can’t hide from what is happening. Right now, many are being awoken and set ablaze for something that is building and rumbling in the spirit.

Wounded and burnt-out Christians are getting a second wind; religious glasses are falling off those who were running around on hamster wheels but not walking in power and authority; and those who felt they had plateaued or reached their peak are now being given new marching orders. This is not a moment to be an elitist, sitting up in our ivory towers and causing division or squabbling over old territory. This is a moment for all of us to ride down into the valley and get the victory!

We can’t keep being divided. We can’t keep acting like school kids trying to be the teacher’s pet and have all the answers; we need to lay down our brands and collectively be the answer!

A couple of weeks ago I heard the Lord say, “The outpouring and great birthing have begun!” The Holy Spirit has not been silent right now, amidst this crisis, but He has been calculatedly readying the bride for impact. The enemy has sought to undermine the voice of the church in this time and use it like an arrow and mockery against us, but I speak for us all when I say, “We will not be silenced. In fact, now we will arise with double the fight we had before!”

On the other side of this crisis, there is going to be a world-wide birthing of unusual and unique ministries and movements. I heard the Lord say that the tide has changed for the church, as we have had to learn quickly how to swim in a different direction and learn the new language of the Spirit. You are going feel a fire in you that you didn’t know you could ever have; a hunger you didn’t know you could feel. This has only awakened you and made you stronger, and now your birth date, your launch date, has been moved up the calendar. It’s time, in Jesus’ name!

Taking Back the Airwaves and the Song of the Season Arising
Some nights ago, I dreamed that I was given the position to be a news anchor of a global media channel, but on my first day, they started rolling the cameras and I just couldn’t read what they were putting up on the screens. It was like my spirit was grieving over the inaccuracy of it. So instead, I began prophesying and singing over the airwaves.

Before they could turn off my mic and shut me down, the glory of God hit the room hard, and everyone fell on their faces weeping in repentance. I could see locational reporters on screens also getting hit by the glory, and they were on their faces. The glory of God was doing the same thing in homes and wherever people were watching from. Suddenly, reports started coming in saying, “Something has shifted! Something has shifted! They found the cure and the pandemic has ended!”

What seemed like a simple act of worship had ushered in such a level of glory that it took over the airwaves and arrested the hearts of people around the world. It was undeniable that God was in our midst. This is our new song arising. Psalmists are rising, Deborahs are rising and the songs of the once voiceless are rising because the bride is getting back her voice and influence!

We can’t cater to the fear and read the script of the enemy’s newsfeed. We were created to write the script and set the tempo. This dream represents the governmental role and influence the body of Christ must have right now to pull down this stronghold, the pandemic of fear, as well as sickness. We have to take charge in the spirit.

The media may have a voice, but God is raising up voices in the land—pure voices of prophetic worship—like David who played his harp and caused demonic spirits to leave. We must raise our voices right now! As we gather in our homes right now, we have an opportunity to pray and see this thing shift!

We Will Never Be the Same Again
If you are still reading this, then by now the Holy Spirit would have stirred you and even given you language and purpose to what you have been sensing already. You are not in isolation, you are not in lockdown like you think; you are in the spring back, ready to be launched. From here on out you will never be the same again—we will never be the same again.