The Christian History Of Valentine’s Day 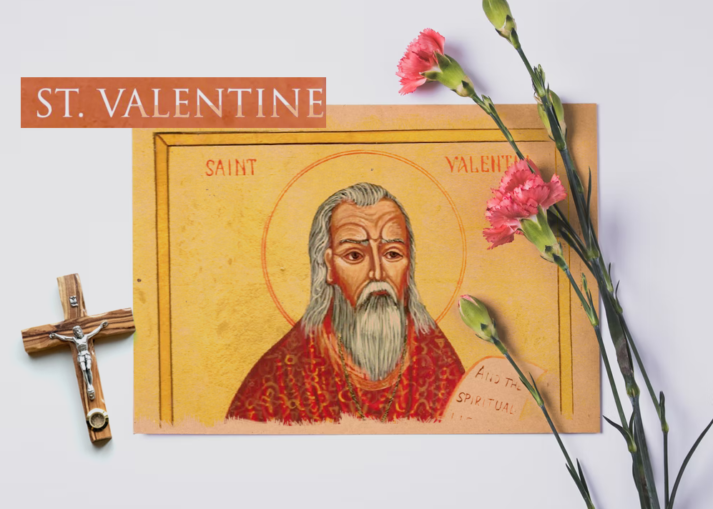 Valentine was a pastor. He risked the Roman Emperor’s wrath by standing up for traditional marriage, secretly marrying soldiers to their young brides.

In the 3rd century, Emperor Claudius II of the Roman Empire banned traditional marriage in the military.

Also, Claudius had the Senate deify him to, along with the Roman gods, be worshiped.

Those who refused to worship the Roman gods were considered “unpatriotic” enemies of the state and killed, as in Emperor Decian’s persecution which targeted Christians with legislation forcing them to deny their consciences, or die.

During the first three centuries of Christianity, there were ten major persecutions in which the Roman government threw Christians to the lions, boiled them alive, had their tongues cut out, and worse. Christian writings, Scriptures and historical records were destroyed.

Valentine was arrested, dragged before the Prefect of Rome, who condemned him to die.

While awaiting execution, his jailer, Asterius, asked Valentine to pray for his blind daughter. When she miraculously regained her sight, the jailer converted and was baptized, along with many others.

Right before his execution, Valentine wrote a note to the jailer’s daughter, signing it, “from your Valentine.”

Valentine was beaten with clubs and stones, and then beheaded outside the Flaminian Gate on FEBRUARY 14, 269AD.

In the High Middle Ages, Geoffrey Chaucer, called the father of English literature, wrote Parliament of Foules (c.1393) that birds chose their mates in mid-February:

“For this was Saint Valentine’s day, when every bird of every kind that men can imagine comes to this place to choose his mate.”

The Greek name for Christ, Χριστό, begins with the letter “X” which in Greek is called “Chi.”

“X” became a common abbreviation for the name Christ.

In Medieval times, the “X” was called the Christ’s Cross.

The Christ’s Cross was a form of a written oath.

Similar to the ancient practice of swearing upon a Bible, saying “so help me God,” then kissing the Bible, people would sign a document with, or next to, the Christ’s Cross to swear before God they would keep the agreement, then kiss it to show sincerity.

This practice has come down to us as “sign at the X”, or saying “I swear, cross my heart.”

This is the origin of signing a Valentines’ card with an “X” to express a pledge before God to be faithful and an “O” to seal the pledge with a kiss of sincerity.

DISCLAIMER
JOY! News is a Christian news portal that shares pre-published articles by writers around the world. Each article is sourced and linked to the origin, and each article is credited with the author’s name. Although we do publish many articles that have been written in-house by JOY! journalists, we do not exclusively create our own content. Any views or opinions presented on this website are solely those of the author and do not necessarily represent those of the company.