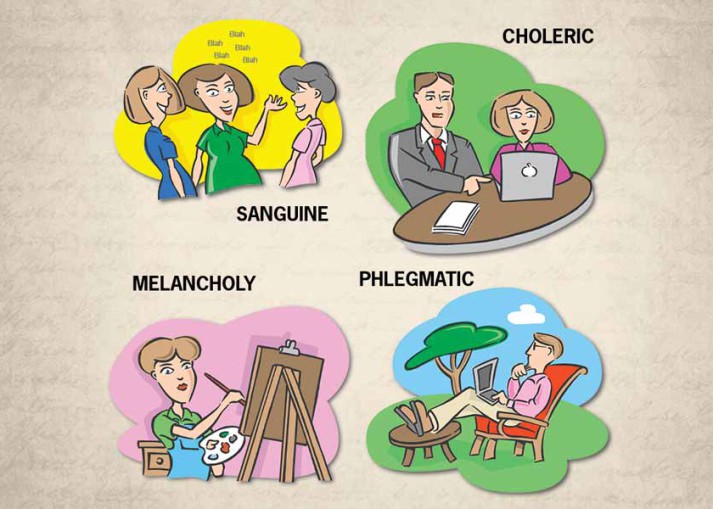 Temperament provides both our strengths and weaknesses. God has given Christians the Holy Spirit, Who is able to improve our natural strengths and overcome our weaknesses – as we co-operate with Him. This article is a short overview of the 4 temperaments which I must point out is not a perfect fool-proof theory, though no theory of human behaviour is.

The real you
The 4 temperaments: Sanguine, Choleric, Melancholy and Phlegmatic, were first identified in Proverbs 30:11-14 when the wise man saw four kinds of people. About five hundred years later, the four were given names by Hippocrates, the father of modern medicine. Temperament is the combination of inborn traits that subconsciously affects all our behavior. It is a person’s temperament that makes that person outgoing and extrovertish or shy and introvertish. Character is the real you. The Bible refers to it as “the hidden person of the heart” 1 Pet. 3:4. It is the result of your natural temperament modified by childhood training, education, and basic attitudes, beliefs, principles, and motivations. It is sometimes referred to as “the soul” which is your mind, emotions and will.

Can people change?
Personality is the outward expression of oneself, which may or may not be the same as a person’s character, depending on how genuine that person is. Many successfully develop their characters and improve their personalities, but it is doubtful that any are able to change basic temperament. The truth is, extroverts are extroverts all their lives. Remember that no one temperament is better that another. Each contains strengths and richness, yet each is fraught with its own weakness and dangers.

An overview of the types
Examples would be: Peter the Sanguine, Paul the Choleric, Moses the Melancholy, and Abraham the Phlegmatic. When you examine the different temperaments, you may immediately identify yourself. If you can’t, it is probably because you are a blend of temperaments.

1. Sparky Sanguine
Extroverted Sparky Sanguine is the warm, buoyant, lively, and fun-loving temperament. She (he) is receptive by nature and external impressions, has capacity to enjoy herself and usually passes on her hearty outgoing nature. Strengths: Loves life, compassionate, optimistic, friendly. Weaknesses: Restless, undisciplined, egotistical, emotional.

The Apostle Peter was a Sanguine. Every time he appeared in the Gospels, he was talking. His sinful betrayal and easy repentance “with tears” is typically Sanguine. Peter became the strong, resolute leader of the Early Church. In the Acts of the Apostles, everything he said was right – because he was filled with the Spirit.

2. Rocky Choleric
Extroverted Rocky Choleric is the hot, quick, active, practical, and strong-willed temperament. He is often self-sufficient and very independent. He tends to be decisive and opinionated, finding it easy to make decisions for himself as well as for others. Rocky Choleric thrives on activity. He is not frightened by adversities, he has dogged determination and often succeeds where others fail. The Choleric is a born leader. He always lands on his feet. Rocky Choleric’s emotional nature is the least developed part of his temperament. He does not sympathise easily with others, nor does he naturally show or express compassion. He has a well-organised mind, though details usually bore him. Once he has started towards a goal, he may run roughshod over individuals that stand in his way. The more Choleric your children’s temperaments, the more intense should be your prayers for their conversion between third and fifth grade, while they still retain sensitivity to spiritual things. Strengths: Strong-willed, self-disciplined, practical, leader, optimistic. Weaknesses: hot-tempered, cruel, bossy, self-sufficient. Cholerics might consider careers that require leadership, motivation, and productivity, provided they do not require too much attention to detail and analytical planning.  Most entrepreneurs are Cholerics. Since Cholerics are not by nature good delegators of responsibility; they tend to evaluate negatively the efforts of others. He oozes self-confidence, is extremely goal-conscious, and can inspire others to envision his goals.

Cholerics have a built-in promotional ability and do well in sales, teaching (but always practical subjects), politics, military service, sports, and many other endeavours. Western civilisation has benefitted much from its Rocky Cholerics. But it has suffered much from them also. The world’s greatest generals, dictators, and gangsters have been predominantly Choleric. What made the difference? Their moral values and motivations.

The Apostle Paul was a Choleric. He was a prime persecutor of the Early Church before he was saved. He later pushed himself relentlessly until he had preached the Gospel around the then known world. Who but a Choleric would crawl out from under a rock pile and the next day walk twelve miles to preach the Gospel? Yet when filled with the Holy Spirit, Paul exhibited a gentleness and compassion that was contrary to his natural temperament.

3. Maestro Melancholy
Introverted Maestro Melancholy is often referred to as the ‘dark’ temperament. Actually she is the richest of all the temperaments, for she is an analytical, self-sacrificing, gifted, perfectionist type, with a very sensitive emotional nature. By nature Maestro is prone to be an introvert, but since her feelings predominate, she is given over to a variety of moods, gloomy and depressed; withdrawn and can be quite antagonistic. Maestro Melancholy is a very faithful friend, but, unlike the Sanguine, she does not make friends easily. She is perhaps the most dependable of all the temperaments, for her perfectionist tendencies do not permit her to be a shirker or let others down. Occasionally, when she is in one of his great moods of inspiration, she may produce some great work of art or genius. Melancholies usually find their greatest meaning in life through personal sacrifice. As a general rule, no other temperament has a higher IQ or more creativity or imagination than a Melancholy, and no one else is as capable of such high-quality ‘perfect’ work.

No temperament has as much natural potential when energised by the Holy Spirit as the Melancholy. all the prophets were Melancholy, as was Solomon and the Apostle John.

4. Flip Phlegmatic
Calm, cool, slow, easy-going, wellbalanced temperament, never seems to get ruffled. He has a high boiling point and seldom explodes in anger or laughter but keeps his emotions under control. Is usually kindhearted and sympathetic but seldom conveys his true feelings. He feels much more emotion that appears on the surface and has a good capacity to appreciate the fine arts and the “finer things” of life. Phlegmatics do not lack for friends because they enjoy people and have a naturally dry sense of humour that others enjoy. They have a retentive mind, difficult for them to be motivated to move beyond their daily routine. The world has benefited greatly from the gracious nature of Phlegmatics. They have a conciliating effect on others and are natural peacemakers. They are masters at anything that requires meticulous patient and daily routine. Strengths: Witty, dependable, easygoing, efficient, calm. Weaknesses: slow, lazy, provocative, selfish, stubborn.

Phlegmatics seem drawn to the field of education. Phlegmatics often make excellent foremen, supervisors and managers. Because they are diplomatic and unabrasive, they work well with people. They are well organised, never come to a meeting unprepared or late, tend to work well under pressure and are extremely dependable.

Abraham is a good example of a Phlegmatic. He is a classic example of how God can transform a person’s natural weakness into strength. Abraham’s fear, worry and indecision became resolution, courage and action to the point that more space is given to Abraham in the New Testament than any other Old Testament character.

The good news is that God has given us the Holy Spirit to help us overcome our flesh and to walk in the Spirit. “…the fruit of the Spirit is love, joy, peace, patience, kindness, goodness, faithfulness, gentleness and self-control…” Gal 5:22-23. To overcome your weaknesses, you need to (a) confess them as sin everytime it happens, (b) believe that God has given you victory and (c) abide in Christ by reading and doing His Word. Then you will be used for His glory.

The Four Temperaments: Are You Sanguine, Phlegmatic, Choleric, or Melancholic?