Heroes Of The Faith: William Seymour 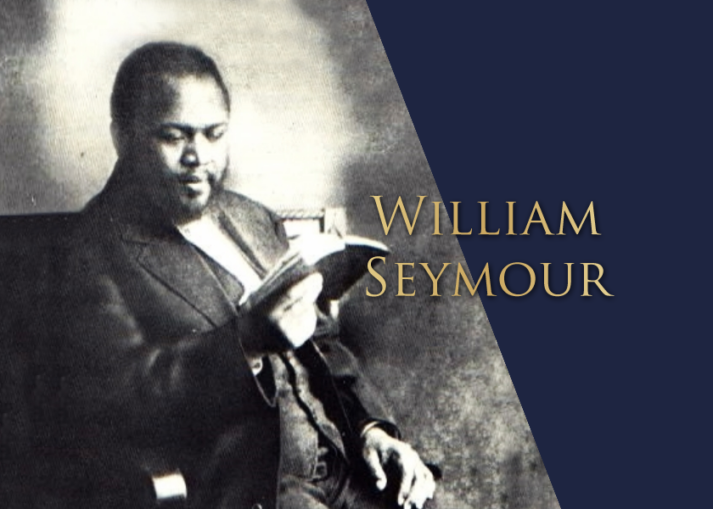 William Seymour was at the heart of the Azusa Street Revival that reshaped Christianity across the world. If you are one of the half a billion Christians who are now a Pentecostal or a Charismatic then your roots lie in that revival, and even if you are not, how you worship and sing in church will have been influenced by it.

William Seymour was born in 1870 in Louisiana to former slaves who lived in extreme poverty. After a very limited education, he came to Christ in an African-American church. He caught smallpox, which blinded him in one eye, and afterwards dedicated himself to God as a preacher. Seymour became part of a movement that believed in being ‘baptised in the Spirit’, something seen by many then (and now) as a life-transforming, post-conversion experience for a Christian. (My own view is that every Christian needs to grow in their faith, whether by an event, events or a process.)

Seymour was invited to pastor a mission in Los Angeles. He started an African-American prayer group in a home. After extensive times of prayer, several of the participants, including Seymour, began speaking in tongues. His group grew rapidly and in 1906 took over a derelict church building at 312 Azusa Street, in what was then a rundown part of Los Angeles.

This was a time when there was an expectancy of revival. The Welsh Revival of 1904–1905, with 100,000 conversions and remarkable phenomena, had been reported worldwide and there had been revivals in India and Madagascar. As Seymour pastored his fellowship, revival broke out. At what soon became nearly continuous meetings there was spontaneous worship, fervent prayer, public repentance, conversions and healings. Above all, there was a sacred sense of the powerful presence of God. Soon, news of what was happening spread both by word-of-mouth and through the press – who were not just critical of the ‘one-eyed black minister’ and the ‘fanaticism’ but also offended by what were soon remarkably interracial meetings. Crowds of 1,500 regularly attended Azusa Street.

Originally drawing from the poor, dispossessed and the African-American community, the meetings soon attracted people from every race and social level. Visitors came first from the United States and then from around the world, returning home renewed and with the expectancy for similar revivals.

Whilst this went on, Seymour remained pastor and preacher; in the gentlest way encouraging unity and equality. He never over-emphasised the phenomena that occurred, saying, ‘Don’t go out of here talking about tongues; talk about Jesus.’He had the wisdom (and humility) to surround himself with a capable, interracial staff of men and women who were able to expand the impact of Azusa Street. With them, Seymour started the Apostolic Faith Movement and produced an influential newsletter that became widely circulated nationally and globally.

Seymour believed that what was happening was a second Pentecost and a potential precursor to Christ’s Second Coming. As the first Pentecost had led to the gospel going out to the world so, he believed, should this. Evangelists with the power of God experiences at Azusa Street were sent out across the States. Soon ‘Pentecostal’ missionaries went out across the world and within two years the movement had spread to over fifty nations.

Let me tell you why William Seymour is a Hero of the Faith.

First, Seymour had a spiritual hunger. He had a ‘holy dissatisfaction’ with the state of Christianity personally, nationally and globally. He wanted his own life, and that of the church worldwide, to better reflect the pattern that he saw in the book of Acts; overflowing with purity and power from the Holy Spirit. Today, we all need that hunger to know the presence, purity and power of God more.

Second, Seymour had humility. Every description speaks of him as being a soft-spoken, unassuming, gentle and friendly man, prepared even to allow his critics to speak to his congregation. Although the leader of the Azusa Street Revival he never sought ‘star status’. Revivals are God’s work and while I believe that human beings cannot cause revivals, I’m fairly certain that they can block them. Quite simply, Seymour didn’t get in God’s way.

Finally, Seymour sought harmony. He avoided antagonism but, specifically, taught that any church on which God was pouring out his Spirit should avoid discriminating on race or gender. He strongly believed racial unity in worship was important; indeed, he felt it was a sure sign of God’s blessing. In 2020, that’s an emphasis that would be good to recover.

William Seymour was an astonishingly important man. It’s a measure of him that being forgotten is something that wouldn’t have bothered him. His main desire was to know Christ and make him known. I can’t think of a better one.