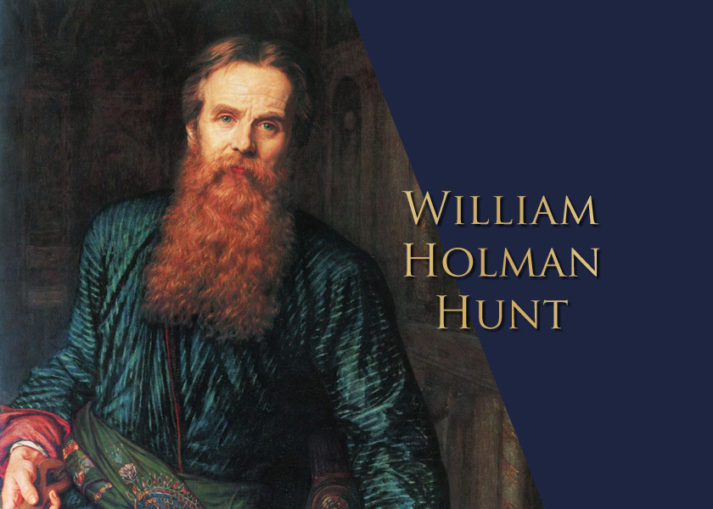 Although William Holman Hunt is mostly remembered for The Light of the World, that extraordinary portrait of Christ knocking on the door of the soul, he created many other striking paintings.

Born in 1827 into a working-class London household, Hunt grew up in an atmosphere where Bible reading was encouraged. He started work as a clerk at the age of 12 but soon entered art school. Acquiring a reputation as a painter, in 1848, along with Dante Gabriel Rossetti and John Everett Millais, he founded the Pre-Raphaelite Brotherhood, seeking a return to the dynamism, colour and detail of mediaeval painters.

Hunt soon acquired his own distinctive style, painting in vivid colours with brilliant lighting and extraordinary detail, and with a remarkable commitment to accuracy. As his artistic career began to rise, Hunt began to return from atheism to the Christian faith. Increasingly his paintings carried an open or subtle message. In painting The Light of the World in 1851, Hunt felt that, in some way, he had encountered Christ.

A typical Hunt painting of the same time is The Awakening Conscience which at first glance seems to be merely a married couple having a disagreement. Looking closer we observe details, including the lack of a wedding ring, which tell us that this is the moment when a man’s mistress has suddenly become aware of the possibility of repentance.

Hunt, anxious to achieve accuracy in his biblical paintings, now took the first of four journeys to the Middle East. Like many Victorian travellers he fell in love with the nature of the area and spent seven years there. During his first visit he produced the remarkable The Scapegoat, with its forlorn animal alone in the desolation around the Dead Sea. Although referring to the animal of Leviticus 16:22 that carried the sins of God’s people into the wilderness, Hunt also saw it as pointing to Christ as the ultimate sin bearer and had Isaiah 53:4 painted on the frame: ‘Surely he hath borne our griefs, and carried our sorrows: yet we did esteem him stricken, smitten of God and afflicted.’

Hunt continued to produce dramatic canvases, often with a spiritual message, and became popular with the public. In our age of high-definition television it’s not easy to recapture the impact that his vibrant and detailed paintings must have made at the time. In the art world, however, Hunt fell out of fashion. Impressionism, which deliberately ignored any commitment to detail, had become popular and morality was now something that people wanted to escape from, rather than endorse. Hunt died in 1910 and was buried in St Paul’s Cathedral, close to his final version of The Light of the World.

Why is Hunt a Christian hero? Without doubt he was a remarkable artist and a Christian, and in many ways an evangelical. Personally, I’m fascinated by the way that he communicates Christian truth.

First, Hunt’s paintings are compelling. It’s hard to ignore a Holman Hunt painting: with few exceptions, they immediately catch the eye. We are drawn in by their colours, detail and dynamism. His first audiences, used to ‘religious art’, were engaged (and in some cases enraged!) by what they saw. So in The Shadow of Death we have Jesus as a bare-chested carpenter in his workshop, stretching his tired arms wide, and his mother Mary has her back to us. For some people the realism and authenticity were just too much.

Second, Hunt’s paintings are challenging. One of the sad features of much art of all kinds is that many artists, however skilful, ultimately have nothing to say. That’s never the case with Holman Hunt: almost all of his paintings convey a message, whether subtle or obvious. Equally challenging is the sense of authenticity and realism found in his paintings. As in The Finding of the Saviour in the Temple or The Shadow of Death Hunt constantly reminds us that the biblical story is not a fairy tale but real-life accounts of people who existed and events which happened.

Third, Hunt’s paintings are convicting. Many of Hunt’s canvases can be considered to be ‘sermons in paint’. One of the dismissive comments about him is that he was a ‘moralist’. Well, living as we do at a time where there is a deficit in morality I find that something more to be praised than condemned. Many of his paintings are about conversion in some form or another and often he seems to be sounding a warning. So, for instance, in The Hireling Shepherd we have a shepherd who is preoccupied with an attractive country girl, while in the background the sheep are straying and in danger. It’s all about Jesus’ reference in John 10:11-15 to the ‘hired hand’ who, not being the shepherd, doesn’t care for the sheep. There’s a powerful warning in it to all in any position of church responsibility: don’t be distracted, care for the flock.

Hunt’s art was compelling, challenging and convicting. Isn’t that what our preaching about Christ should be?