Heroes Of The Faith: Lilias Trotter 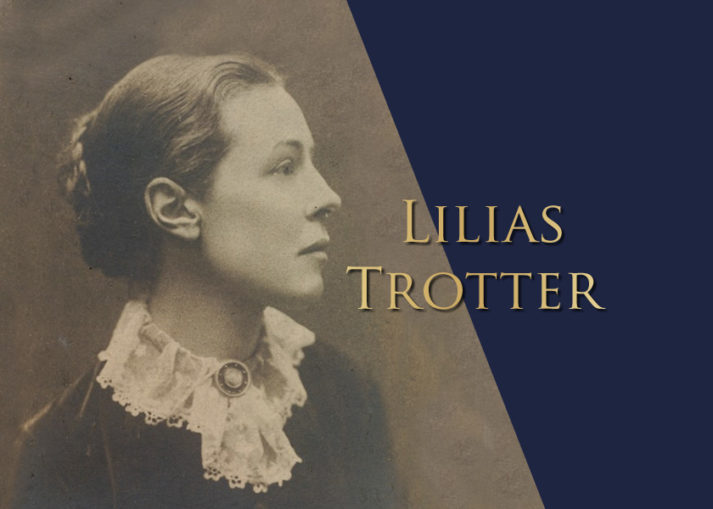 The remarkable story of Lilias Trotter, artist and missionary, deserves to be much better known. Born into a privileged family in London in 1853, Lilias became a believer in Christ in her teens and was soon involved in Christian movements that encouraged her to seek a deeper spiritual life. Wealthy enough not to need to earn a living, Lilias began working as a volunteer in London with working girls by day and with prostitutes at night.

Lilias had an extraordinary gift for art. At the age of 23, when staying in Venice with her mother, they found that the famous art critic and philosopher John Ruskin was in the same hotel. Boldly, Lilias’ mother asked if Ruskin would look at her daughter’s work. The great man reluctantly agreed, only to find himself captivated by what he saw. Ruskin, whose friendship with Lilias was to last until his death in 1900, began tutoring her as an artist. Eventually he challenged her by saying that if she would give herself fully to art she could become the ‘greatest living painter and do things that would be Immortal’. It was an incredible offer given that Ruskin had successfully launched the careers of other artists. Lilias agonised in prayer before deciding that her art must take second place: she had to ‘seek first the Kingdom of God and his righteousness’.

Lilias continued with her charitable and evangelistic work in London but in 1884 she underwent surgery which left her with a weakened heart. Despite this she felt called to missionary work in North Africa and applied to two organisations only to be rejected because of her poor health. Undaunted, she and two other single women simply went to Algeria on their own.

So with poor health, no knowledge of Arabic and without support from any organisation, Lilias began her ministry as a missionary. At first she and her colleagues were based in Algiers but as the work expanded and she was joined by other workers, they mounted extraordinary expeditions deep into the Sahara across a vast area from Morocco into Tunisia.

Lilias faced constant challenges. She was a single woman in a very masculine culture and her health remained so frail that she frequently had to return to Europe to convalesce. She was opposed, not just by those who rejected her preaching, but also by the French colonial government. Furthermore, although she and her colleagues saw conversions to Christ, there were discouragements as many converts came under appalling pressures to renounce their faith.

Nevertheless, Lilias persisted, and as the years passed the mission work expanded and little fellowships of Christian believers grew. Eventually, in her seventies, Lilias became confined to bed where she spent her time in prayer, writing, painting and managing the mission. She died in Algeria in 1928 after four decades of labour, grieved over by both her colleagues and by many Algerians to whom she had shown God’s love.

Lilias was an innovative missionary. She decided to work with women and children, doing what we today would call ‘coffee bar evangelism’, using music and producing attractive leaflets (she used her artistic gifts well) in easy-to-understand colloquial Arabic. A typical example was how Lilias was able to use the mystical and experiential side of her faith to reach out to mystics in the Sufi branch of Islam and to speak to them of the only answer to their search for God: Jesus.

Lilias’ labours were fruitful. Despite persecution and the emigration of believers, the Algerian church has endured and her mission organisation continues today as Arab World Ministries. No less significant is the fact that her mission practices have become adopted across the world.

Let me mention three features of the life of Lilias Trotter that I find inspiring.

First, Lilias was a woman of vision. As an artist she had an extraordinary ability to see the natural world, and as a Christian she was gifted with a similarly profound spiritual perception, something that she nurtured by seeking God daily through Bible reading, prayer and meditation. Her gift of insight helped her see what was right both for her life and for her efforts for the gospel. In both the physical and spiritual sense Lilias was a woman always looking towards the horizon. Would that there were more like her.

Second, Lilias was a woman of decision. Faced with the overwhelming complexity of modern life many people find that it’s easier just to drift and let things happen. In contrast, Lilias was a woman who could – and did – make decisions. Given the extraordinary offer of becoming a famous artist she carefully and prayerfully chose to do something more. In North Africa, faced with endless challenges for herself and for those who worked with her, she proved to be a leader who made wise and strategic choices.

Third, Lilias was a woman of determination. In her spiritual life, she rejected any superficial knowledge of God but instead hungered to know him better. Diagnosed with lasting health problems, it would have been perfectly sensible for her to remain in London, but instead she chose to go to Algeria. Even there she would delight in leaving the relative comfort and security of the capital to visit remote and dangerous regions. Lilias was a woman who, having decided what she had to do, did it.

Ruskin had promised Lilias that if she would give everything to her art she could do things that ‘would be Immortal’. She rejected that offer, but we can be confident that what she achieved for Christ instead will last for eternity.