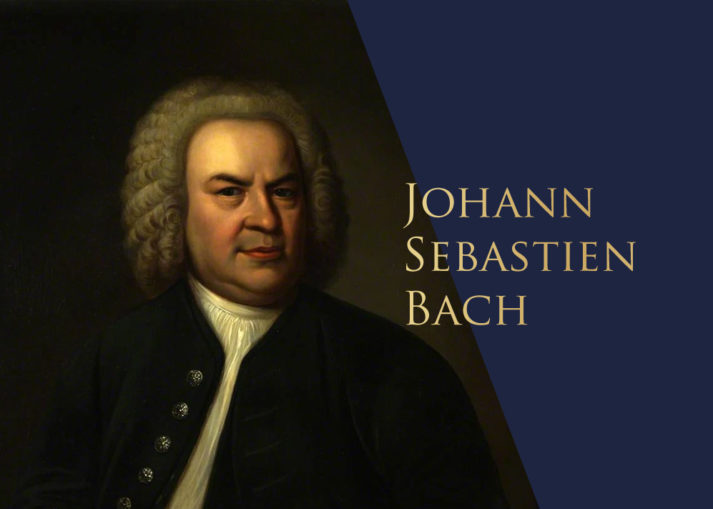 Johann Sebastian Bach was born in 1685, and was part of a remarkable German musical dynasty. His world was shaped by the theology of Martin Luther, a great church reformer but also a man who saw music as a gift of God. Steeped in music from birth, Bach progressively mastered techniques and instruments until he became a composer and church music director. He also studied theology and in his Bible, still preserved, we can see his careful annotations. After a number of short-lived appointments he found a home in Leipzig where for thirty years he controlled music not just for the churches but also the court and society. He died in 1750 leaving behind an unparalleled legacy of music.

Of Bach the man we know little outside his music. The sparse correspondence we have preserved from him is typical of church musicians of every age and denomination: he defends his music, grumbles over standards and pleads for more resources. We know that Bach suffered many tragedies. He was orphaned as a child, returned from a trip away to find his beloved wife not only dead but buried, and twelve of his children died in childhood. When Bach’s music touches on sorrow, you know he’s been there.

Bach’s music is awesome in terms of both quantity and quality. Quantity? Well, if you want a complete collection of everything he wrote – orchestral, keyboard, cello, violin, flute and the vast body of church music. Quality? Bach had an effortless technical mastery of every intricacy of music. Yet although he was capable of writing works of dazzling mathematical complexity, they are always music to be enjoyed and never simply a show of academic brilliance.

Approximately three quarters of Bach’s music was written for the church. In the Lutheran church of his day, services (which could be up to four-hours long!) had a substantial musical composition – a cantata – in the middle. For soloists, often a choir and a range of instruments, the cantata was usually around twenty-minutes long; it reflected on the Bible reading and prepared the congregation for the sermon. The church calendar required cantatas for seventy occasions a year and, in one of the greatest sustained feats of creativity in history, for three years Bach created a new cantata every week. This meant that each week he had to set a German text to music (often writing parts for a dozen soloists and players), have the scores copied, rehearse the work and, finally, direct it on the Sunday. Despite the obvious temptation, Bach rarely repeated himself and consistently generated fresh music of extraordinary impact and beauty.

But it was Bach’s faith that drove so much of his work. In some ways Bach can be seen as a theologian and preacher who communicated in music. In writing a church piece Bach frequently began with the abbreviated prayer J. J. (‘Jesus help’) and ended with S.D.G. (Soli Deo Gloria – ‘To God alone be glory’). Bach wrote that ‘the aim and final end of all music should be none other than the glory of God and the refreshment of the soul’, and his intention to praise God and encourage his hearers is there throughout his music.

Of the many things that can be said about Bach, let me mention three I particularly appreciate.

First, I’m impressed by how Bach saw his work as worship. Yes, church music paid his wages but even when he was writing compositions every week there is no evidence that he was ever ‘just doing his job’. He worked for God and God deserved his best. Many of us face the draining burden of having to do things repeatedly. May we stay as fresh and inspired as Bach.

Second, my heart is warmed by Bach’s profound Christian faith. The fact is that Bach, following Luther, understood the heart of the gospel to be about how sinful men and women are made right with a holy God through Christ’s death on the cross. We too must never lose sight of this truth.

Finally, as an evangelist, I am encouraged by the way that in his church music Bach doesn’t simply describe the truth, he preaches it. He invites a response, seeking to draw his hearers from being merely spectators of the truth into being those who can claim the truth as their own. Over the years Bach’s music has proved to be very dangerous for atheists.

In his final years Bach created a work that was meant to be his testament to the world; the B Minor Mass. Unusually, Bach chose a Latin text, probably so that his work might go out beyond Germany and into the world. The final chorus Dona nobis pacem is a prayer for God to grant us his peace. A very fine modern performance, done in a way that Bach would recognise, is available to watch here. It’s directed by the Japanese conductor and supreme Bach interpreter Masaaki Suzuki who, as a committed Christian himself, understands not just the music but the faith which created it. It is indeed for ‘the glory of God and for the refreshment of the soul’.