Heroes Of The Faith: Elizabeth Fry 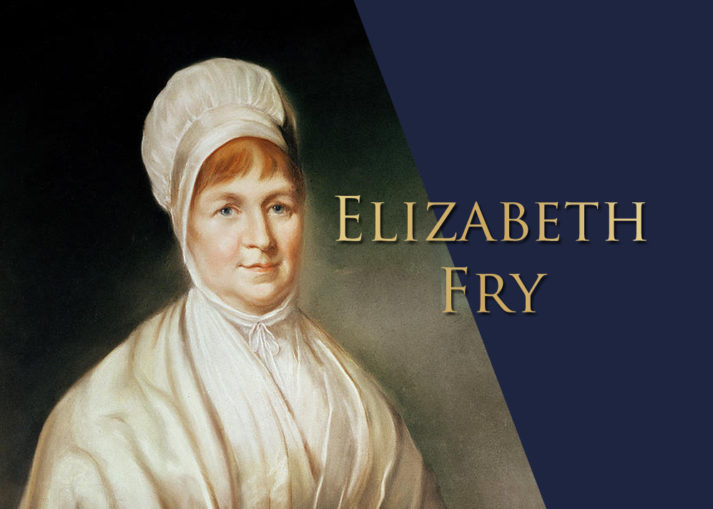 The story of how a middle-class lady was able to reform the appalling conditions under which prisoners were treated in Britain and in many other countries, is a classic example of the way God can use unlikely people to extraordinary effect.

Elizabeth Fry was born Elizabeth Gurney in 1780 to a Norwich Quaker family whose Christian faith and traditions were to shape her life. Quakers preferred to dress in a style of plain clothing that made them instantly recognisable. They rejected violence in any form and believed everybody was equal before God and tried to ignore social rank. Unusually for that time, they believed that there should be equality between the sexes so that women often took leadership roles.

At the age of seventeen Elizabeth had a conversion experience and, ever after, was a woman who was committed to public and private prayer, to Bible reading and preaching, and to doing good to others.

Elizabeth was an anxious child who often suffered from ill health, a trait that persisted through her life. At the age of twenty she married Joseph Fry, with whom she was to have eleven children. Largely because of her husband’s support, Elizabeth’s childbearing did not get in the way of her social work.

In 1813 Elizabeth visited the women’s section of London’s notorious Newgate Prison and was horrified. The section – built for 60 but now containing 300 – was crowded with women and children who wore rags, slept on straw and suffered every kind of abuse. Quietly outraged, Elizabeth returned the next day with food and clothing, but crises in the family delayed her full involvement in prison work until 1816. Helped by others, she began regular visiting, bringing in food, clothes and books. She created a prison school and began schemes in which inmates could do work and learn skills. She read the Bible to the women and, with considerable effect, preached to them. Seeking to give inmates dignity and self-respect, she involved them in decision making.

Realising that the prison system was badly flawed, Elizabeth began to promote the idea that prisons should not simply be places of punishment but also of rehabilitation. She created a number of associations for prison reform in Britain and soon her increasingly popular ideas spread across Europe and the United States.

Gifted with intelligence, charm and a persuasive and persistent personality, Elizabeth campaigned endlessly for change. She encouraged prisons to adopt an ethos of kindness and sympathy, to recruit female officers and to protect women by separating them from men. She wrote pamphlets and books and spoke to parliamentary committees. The press made her a public figure and she acquired the nickname ‘the angel of the prisons’. Elizabeth used her growing reputation and authority to promote her cause.

Elizabeth seems to have been tireless. She was outraged by the transportation of prisoners to Australia, something which exposed women in particular to humiliation and danger. While working for its abolition, Elizabeth tried to minimise the harm of transportation, visiting over a hundred ships and thousands of prisoners. She fought against the excessive use of capital punishment, worked against homelessness and opened a training school for nurses.

Elizabeth Fry died in 1845 but her work continued and she became an inspiration for future generations.

What challenges me about Elizabeth Fry is not just her Christian compassion but the quality of it.

First, it was a sacrificial compassion. It’s easy to praise social action at a dinner party or on social media but Elizabeth was someone who was compassionate. With her background she would have struggled with everything about a prison: the squalor, the smell, the disease. Yet, echoing the Christ she loved and followed, she told prisoners, ‘I am come to serve you, if you will allow me,’ and service always means sacrifice. She paid a price, too, with the public, some of whom felt that she was reducing the deterrent effect of prisons.

Second, it was a sensitive compassion. Elizabeth recognised the danger of being condescending and humiliating to those in need. In speaking to prisoners she rarely said ‘you’ but would say ‘us’. She stood alongside those who had been abandoned by society and treated them with dignity and respect.

Third, it was a sensible compassion. Elizabeth’s compassion was realistic and practical. She encouraged the education and training of inmates so that they could take up a trade when they were released. She made sure that every woman who was to be transported was given a kit that included not only a Bible but also essentials such as sewing equipment. She set up support facilities to assist women when they left prison.

Finally, it was a strategic compassion. Elizabeth knew that what she could do alone was limited. She used her personality, her social links and her influence to get others involved with her. The results were that her labour outlived her.

Elizabeth Fry’s compassion is challenging. She recognised there was a scandal in the prisons and, becoming indignant, did something about it. There are no shortages of scandals today but I find myself wondering where is our indignation? Where is our compassion? May the example of Elizabeth Fry inspire us today to do ‘good works’.