Heroes Of The Faith: Elisabeth Elliot 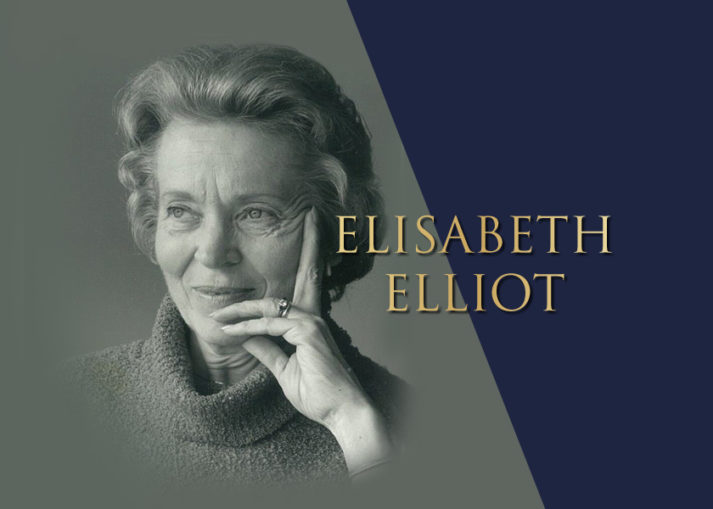 Elisabeth Elliot was born in 1926 in Brussels to missionary parents who soon relocated to the USA. There, at an early age, she made a personal profession of faith to follow Christ. Elisabeth soon felt God’s call to be a missionary. In 1944, with the intention of becoming a Bible translator, she enrolled at Wheaton College where she met Jim Elliot who had a similar calling for missions and with whom she had a long romance. After graduation Elisabeth trained as a Bible translator and in 1952 both she and Jim went independently to Ecuador to work as missionaries. Finally, in 1953 she and Jim married in Ecuador where, in 1955, their daughter Valerie was born.

A missionary challenge at the time was a totally unreached Amazonian tribe, then known as the Aucas but now known as the Waodani. Links with this tribe, deep in the rainforest, were almost non-existent and their language was unknown. The Waodani also had a fearsome reputation for violence. (Anthropological studies have revealed that they had the highest rates of homicide ever recorded in a human society.)

Drawn by the challenge of the Waodani, a group of five young American missionary men, including Jim Elliot, decided to try to reach them. After seemingly friendly initial encounters, in January 1956 they flew in only to be suddenly speared to death.

The murder of these five men had an enormous impact in the United States and worldwide. The press focused not just on the events and the ‘savage’ tribe involved but also on the survivors, notably Elisabeth and baby Valerie. Elisabeth left for the States with her daughter and there, in a matter of weeks, wrote the book Through Gates of Splendor. It became a bestseller not simply because of the dramatic events it recounted but because Elisabeth, gifted with both writing ability and deep insight, had produced a remarkably powerful book. In this and subsequent books, Elisabeth’s depiction of her husband Jim – with his inspiring quote, ‘He is no fool who gives what he cannot keep to gain that which he cannot lose’ – gave the world a great example of missionary commitment.

Feeling called by God to witness to those who had killed her husband, Elisabeth returned to Ecuador with her daughter. Working amongst an adjacent tribe, she prayed for an opportunity to make contact with the Waodani. Finally, a Waodani woman appeared, allowing Elisabeth to begin to learn the language and, after being promised safety, Elisabeth, her three-year-old daughter and Rachel Saint (the sister of the murdered pilot) went to live with the Waodani. The world held its breath. The idea that Elisabeth, as a single mother, was taking her little daughter to live with the violent tribe that had killed her husband was stunning. No less shocking in the 1950s was the fact that it was a woman taking the initiative in reaching out to a murderous tribe.

For two years the women and Valerie lived with the Waodani. They were accepted and, learning the language, taught the basics of Christianity. They were able to display forgiveness to those men who had slain the men they had loved and their living demonstration of what forgiveness meant undermined the fatal Waodani culture of unending family vendettas.

Eventually Elisabeth left the Waodani and worked with another tribe until 1963. Leaving for the States, she then focused on writing and speaking. She taught not just about missions work but also about many aspects of Christian living. As the 1960s brought enormous cultural changes, she found herself commenting on the role of women, where this most courageous of women took a position against feminism.

In 1969 Elisabeth married again, to a professor of theology. Tragically, he died from cancer in 1973. A widow once more, Elisabeth continued her worldwide ministry, marrying for a third time in 1977 to a hospital chaplain. For thirteen years she hosted a daily Christian radio programme. With the new century it soon became apparent that Elisabeth was beginning to suffer from dementia and she gave up public speaking before finally dying in 2015.

Let me highlight three things that are striking in Elisabeth Elliot’s long life of faith.

First, her faith showed a deep obedience to God. Elisabeth saw Christianity as something that involved a discipleship of complete obedience to Christ. It was such a discipleship that compelled her to meet with her husband’s killers and forgive them. When asked to justify missionary work she simply pointed out that the church remained under the orders given by Christ. Elisabeth was convinced: to belong to Christ was to obey him.

Second, her faith was marked by a profound acceptance of God. Elisabeth grappled with the suffering she experienced; the death of two husbands, the murder of fellow workers and many other struggles. She rejected any attempt to find explanations for such events. Importantly, she taught that we must accept what we are given from God precisely because he is God. The path of obedience often leads through deep water: explanations can wait till heaven.

Finally, Elisabeth’s faith gave her a sturdy independence before the world. All Christian communication can either be comforting or challenging and what Elisabeth said and wrote was always the latter. Quite simply, she refused to give what people demanded. After Elisabeth went to the Waodani there was an expectation that she would confirm the view that they were appalling savages. Instead, she wrote compellingly of how the people she had come to love had both vices and virtues. Her concern to say what she felt God wanted her to say made her independent of all other pressures.

The faithful and fruitful life of Elisabeth Elliot sets a challenging example of discipleship to us today. She deserves to be remembered.