Heroes Of The Faith: C.S. Lewis 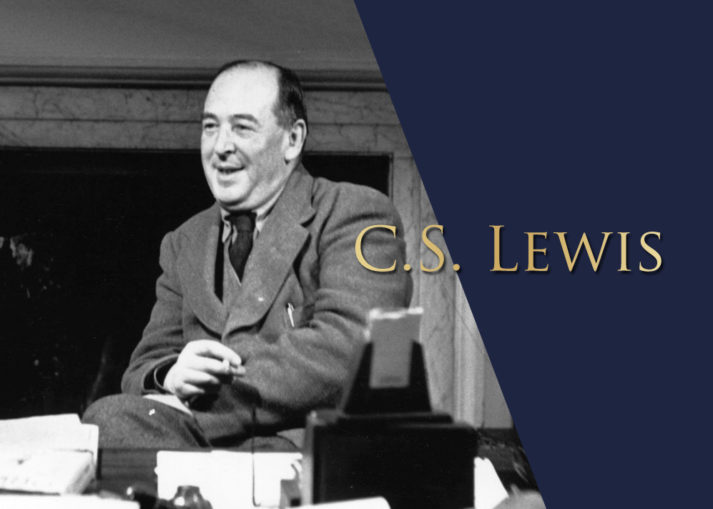 I am one of many people who have found both wisdom and wit from the writings of C.S. Lewis. Clive Staples Lewis – known always as ‘Jack’ to his friends – was born in Northern Ireland in 1898 and grew up in a house overflowing with books. He was sent to England to be educated where he left his family’s formal Christianity to become a professing atheist. After a time on the frontline during the First World War, he began an academic career in English Language at Oxford University which was in effect to last all his life. Even when he was made a Professor at Cambridge, Lewis still returned to Oxford for weekends.

As a young man Lewis found himself increasingly unhappy with his atheism. With a vivid imagination enriched by extensive reading, he found himself longing for something more satisfying than anything atheism could offer. Conversations about God with many Christian friends, including J.R.R. Tolkien, gradually convinced him that religion could be true and, in 1929, Lewis became a reluctant believer in God, moving within months to a full acceptance of Christianity.

Without neglecting his increasingly acclaimed academic career, Lewis started defending and promoting his new-found faith. The result was a wide variety of books which were all brilliantly written, well-argued and thoroughly accessible. The Second World War brought him more attention when he became a popular radio speaker; his talks on the Christian faith were published as Mere Christianity, a book widely considered a spiritual classic. Lewis wrote many other books on subjects that he knew people found difficult: miracles, pain, prayer and other issues. He also wrote a range of fiction, all of which involved his faith: The Screwtape Letters, a science fiction trilogy and the seven children’s books of The Chronicles of Narnia. Lewis’s success came at a cost: his outspoken defence of the Christian faith was resented by his colleagues.

Lewis’s social circle in Oxford was almost entirely masculine but, to everyone’s surprise (including his), in his late fifties he found himself in an unlikely romance with Joy Davidman, an American writer. Their happy marriage lasted four years before her passing from cancer. Lewis himself died in 1963 but his books continue to have an extraordinary influence within Christianity and beyond.

Many books have been written about Lewis as a theologian, a writer and a defender of Christianity. Here are some of my favourite C.S. Lewis quotes.

As an evangelist, what I most appreciate about Lewis is the superb way in which he communicated Christian truth. Somehow, he was able to hold together a number of virtues.

First, Lewis communicated with both depth and simplicity. For a man who lived the cloistered life of an Oxford academic, Lewis was profoundly sensitive to the concerns and struggles of ordinary people. At a time when theologians were discussing questions no one was asking in language no one could understand, Lewis spoke simply and directly to everybody. He had the gift of taking profound and complex theological ideas and, with memorable phrases and relevant illustrations, transforming them into truths that everybody could understand. With his extraordinary knowledge and profound intelligence Lewis could easily have talked down to his readers, yet he had the ability – and the humility – to put himself alongside them. There’s a lesson there.

Second, Lewis communicated to both imagination and intellect. Lewis’s personal road to faith had begun with his imagination. He never forgot that and even in his most reasoned works we find him using sparkling language and evocative imagery. That appeal to the imagination is even stronger in his fiction. Yet at the same time, Lewis knew that appeals to the emotions alone can be dishonest and unhelpful unless they are based on reason. Much of the power of Lewis’s writing lies in this simultaneous appeal to head and heart: persuasive claims delivered in gripping prose. There is good sense here. A faith based only on emotions can fail in a time of testing, while one based only on reason can leave the heart barren. Another lesson.

Finally, Lewis communicated with both focus and breadth. Lewis was a bold defender of the Christian faith but he was selective in what he defended. So, he was outspoken on the fundamentals of the faith as the deity of Christ, the truth of the Gospels and certainty of heaven: essentials that he famously termed ‘Mere Christianity’. Yet beyond such matters he refused to be drawn. There is no agreement on who originally said, ‘In essentials unity, in non-essentials liberty, and in all things charity,’ but Lewis would have agreed with it. I find there is another lesson there.

Lewis speaks powerfully to those on the edge of faith. Yet he also speaks to us Christian believers who are in need of encouragement and direction. C.S. Lewis is a truly outstanding hero of the faith.