Heroes Of The Faith: Apolo Kivebulaya 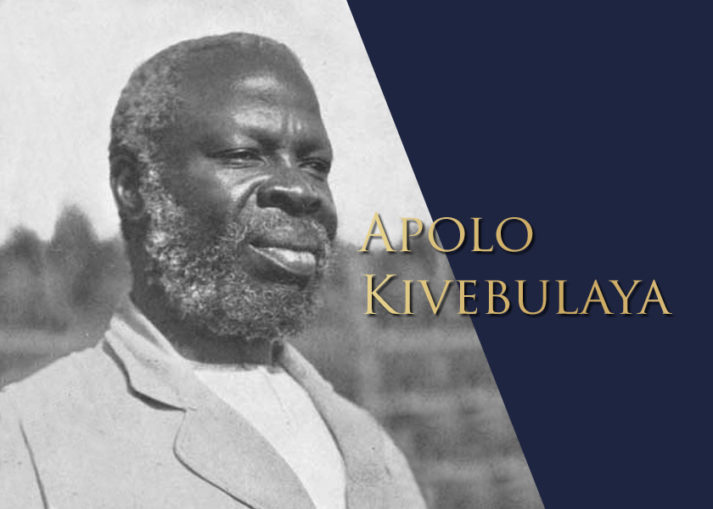 Some heroes of the faith are forgotten and deserve rediscovery. One of these being Apolo Kivebulaya, a remarkable church worker in Africa for 40 years and a reminder of the way so many African Christians have spread Christianity on that continent.

Apolo was born into a peasant family in 1864 in Kampala in what is now Uganda, and given the name ‘Waswa’. It was a time when his world was beginning to change dramatically. The extraordinary carving up of the continent by the European powers had begun, and alongside came European missionaries with the gospel. The first missionary arrived in Uganda in 1877 and Christianity spread rapidly. It soon met opposition and in the middle of the 1880s the king ordered the brutal killings of Christian converts – the famous ‘Uganda Martyrs’. Sometime afterwards, Waswa became a Christian, taking the name Apolo after Apollos, the church leader of Acts 18. He was baptised in 1895 and immediately began working with the Anglican Church. He was briefly married but his wife died; deciding that God wanted him to remain single, he chose not to remarry.

A man of incredible energy and enthusiasm, Apolo began church planting. Under the leadership of the Church Missionary Society he worked in the foothills of north-western Uganda and, clearly gifted in evangelism, saw numerous conversions and the start of many new congregations. Soon Apolo accepted the challenge to go west to evangelise the tribes in the Belgian-controlled area that is now the Democratic Republic of the Congo, and set off, crossing the snow-capped Rwenzori Mountains in winter. Of the moment when he was finally able to gaze westwards into the heart of Africa he wrote: ‘I stood and looked far away to the Congo. The prospect terrified me.’ Yet driven by his faith, his courage and his compassion for those who did not know Jesus, he went onward.

Despite now finding himself in a very different culture, his powerful preaching met with great success. Less popular, however, were his demands, not just for conversion, but for a changed lifestyle. Finding an opportunity to expel him, a chief had Apolo escorted back to prison in Uganda. There, greatly discouraged, Apolo had a vision in which Jesus appeared shining like the sun, telling him, ‘Take heart, for I am with you.’

Eventually, Apolo was released but the Belgian colonial authorities had closed the border and for twenty years he stayed in Uganda as a church planter. There he travelled hundreds of miles annually on foot (he never wore shoes in his life) and by bicycle. He preached simply, emphasising Jesus and the cross but always insisting that converts live out their new faith consistently. He encouraged the translation of the Bible into local languages and was particularly concerned about such social issues as education and the care of infants and deserted women.

In 1903 Apolo was ordained a priest in the Anglican Church and frequently found himself acting – with remarkable grace – as an intermediary between European missionaries and the African congregations.

In 1915 Apolo was able to return to Congo and began rebuilding the church he had left there. His enthusiasm for evangelism never waned and within a few years he felt called by God to be a missionary to the little-known Pygmy tribes of the deep forest. Despite great differences of culture and language, his personal warmth and grace allowed him to win converts for Jesus and he developed a network of small congregations across many tribes.

Finally, Apollo was called back to Kampala where he was made a canon of the cathedral. Told that he had a fatal illness, he requested that, despite the tradition that he should be buried facing eastwards, he would be buried facing the opposite direction, to emphasise that the gospel needed to go to the west. He died in 1933 and his wishes were respected.

Apolo Kivebulaya served God at an extraordinary time. In 1890 there had been just one church with 200 members in Uganda but by 1927 there were 2,000 churches with nearly 185,000 members. The change was not simply in numbers, but the leadership was now increasingly African. Under God some of that explosive growth and development was Apolo’s work.

Apolo’s missionary passion, persistent joyfulness and saintly life brought praise from everybody. It’s an utterly inspiring life and let me mention three aspects of it that challenge me.

First, Apolo had an active faith. His was a life of constant action: preaching, teaching, organising, travelling and praying. All he did was prayed over and wisely chosen. He was also an activist with vision; one of those precious souls who is always looking to the horizon. We could do with more like him today.

Second, Apolo had an astute faith. He lived at a time of political, religious and technological change in which the world he was born into was overturned. In that cultural turbulence Apolo led wisely. So, for instance, he rapidly adapted to that technological innovation of the bicycle, delighted to use it for the gospel. Yet, above all, Apolo simply steered a steady course: preaching the gospel, teaching converts and establishing churches. In similarly turbulent times there’s a lesson for us.

Finally, Apolo had an authentic faith. The best evidence for talking about Jesus is to live like him. Every report of Apolo, whether from Europeans or Africans, speaks of how he overflowed with the fruit of the Spirit. He was praised for his love, gentleness, sympathy and sincerity, had the simplest of lifestyles and cared deeply for people, especially the vulnerable. His was not a faith of mere words but of a transformed life that honoured God and won people to Christ.

Apolo Kivebulaya lived in a very different world to ours. Yet his life of faith and service remains relevant and challenging to us all wherever we live.