Heroes Of The Faith: Amy Carmichael 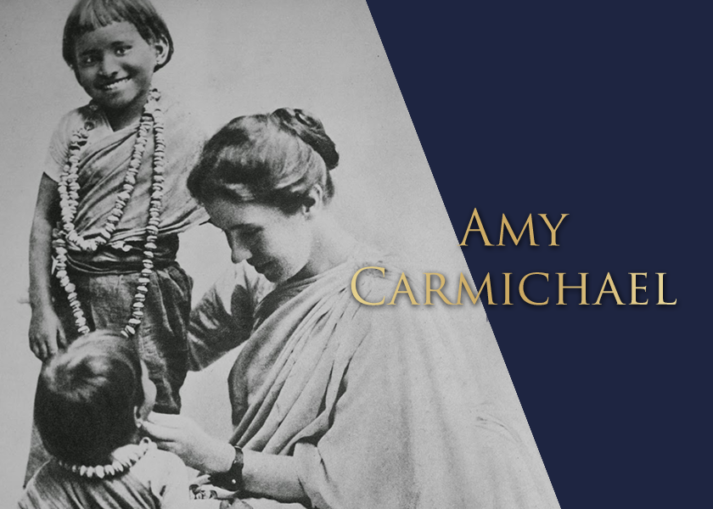 Amy Carmichael (1867–1951) was an evangelist and a social reformer who worked for a better life for women and girls and fought against the sexual trafficking and abuse of children.

Amy Carmichael was born in County Down, Ireland in 1867 and grew up in a devout and Christian family. At the age of 15 she committed her life to Christ and soon, in a foreshadowing of her future, became involved in an evangelistic and social ministry to mill girls in Belfast. At 21, Amy heard Hudson Taylor of the China Inland Mission speak and felt called to missionary work. Initially her attempts to get on the mission field did not go smoothly. Barely five-foot tall and suffering from a number of ailments (some of which were to permanently plague her), she was rejected for work in China. Undeterred, she applied to another society and then spent time in Japan, China and Sri Lanka before finally arriving in southern India in 1895. Once there, she put down roots and never left until she died fifty-five years later.

Amy started her work with poor, lower-caste girls and soon became aware of those who had been forced to become a devadasi, a ‘religious prostitute’, in local temples. In 1901, Amy met a seven-year-old girl who had escaped from the temple and needed to be protected. She realised that preaching against the evil of child abuse wasn’t enough: she needed to provide a ‘safe place’ for those she rescued. The result was a settlement – the Dohnavur Fellowship – which by 1913 was already looking after 130 girls. After the First World War, Amy opened a home for young boys, many of whom had been born to temple prostitutes. Guided by her own happy experience of family life, Amy worked to ensure that her orphanages never became institutions but instead were ‘family’. She herself became universally called ‘Amma’ or ‘mother’ in Tamil.

Amy’s work faced both opposition and apathy. Indeed she even found coolness towards her work from the mission societies who felt that the evils she battled against were not what their supporters wanted to hear about. Amy found herself independent of any mission organisation.

One of the many fascinating features about Amy is how, in many ways, she was decades ahead of her time. She saw the problems with institutional orphanages and tried instead to create a family atmosphere. She was profoundly sensitive to cultural issues and adapted to local culture as much as she could, dressing in local clothes and cosmetically darkening her skin. She was very wary of uncritically importing Western ideals and habits to replace traditional Indian practices and worked towards an authentic Indian Christianity. She was particularly careful that her criticism of the devadasi system could not be misunderstood as an attack on traditional Indian values.

Amy suffered a serious fall in 1931 and remained bedbound at Dohnavur for the remaining twenty years of her life. Typically, she refused to waste the time, involving herself in prayer and in writing thirty-five books. Her writings reveal a profound faith, deepened and refined by suffering. Amy has contributed many quotations to the Christian world and here are some of my favourites.

‘Prayer is the core of the day. Take prayer out, and the day would collapse.’

‘The saddest thing one meets is a nominal Christian.’

‘One can give without loving, but one cannot love without giving.’

Amy asked that no gravestone be erected to her, and all that exists over her grave is a birdbath inscribed with that single word ‘Amma’. Of course, her real monument is the Dohnavur Fellowship which continues to this day. Sadly, so does temple prostitution, despite being technically outlawed. And, of course, throughout the world, prostitution and trafficking of children continues, particularly where there is poverty.

Amy was a remarkable woman who challenges me in a number of areas.

First, I’m challenged by Amy’s focus. Amy felt called to take care of orphans and, for fifty years, that’s exactly what she did. To use one of her images, she chose to plough deep rather than wide. She let nothing distract her.

Second, I’m challenged by how forceful Amy was. Amy faced extraordinary obstacles throughout her life. Her health was frail, her supporters often critical and her exposure of difficult and sensitive matters antagonised the British authorities who preferred to overlook what happened to poor, low-caste girls in India. Yet Amy, undeterred, continued her work. She let nothing divert her.

Finally, I’m challenged by Amy’s frankness. The first book Amy wrote from India in 1905 was titled Things as They Are. In it, she spoke with honesty about the state of affairs in southern India and was denounced for doing so. She could be forthright: when a woman wrote asking, ‘What is missionary life like?’ she received the reply, ‘Missionary life is simply a chance to die.’ At times, Amy accused some of her fellow Christians of merely ‘playing at mission’. Amy spoke out and she let nothing dilute her.

Amy Carmichael was an extraordinary woman. To be honest, I’m not sure I would have found Amy a comfortable colleague. But she was clearly the individual God wanted to do that task in that time and place. That raises a question: are we where we ought to be and are we focused, forceful and frank?