Heroes Of The Faith: Amanda Smith 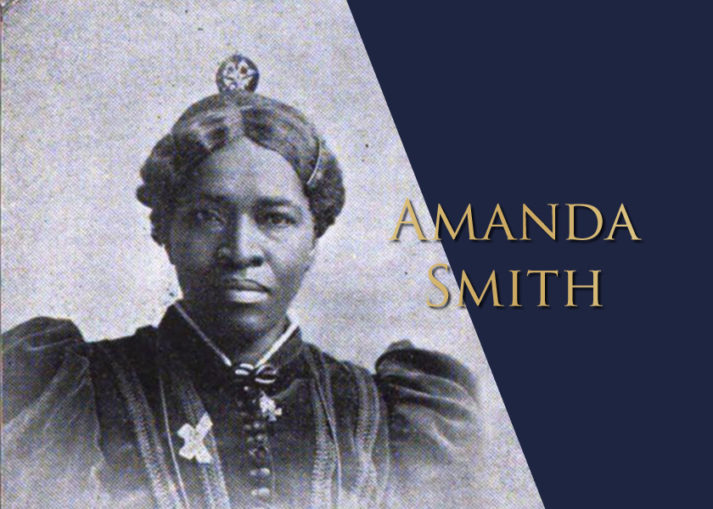 The life of Amanda Smith was extraordinary: she travelled from being a black slave to becoming the first international woman evangelist.

Amanda was born in 1837 in the American state of Maryland, the first of 13 children. Her parents were slaves and she became one too. Despite the poverty of her upbringing Amanda grew up surrounded by prayer and Bible reading and was taught to read and write by her parents. Through hard work, her father managed to buy freedom, first for himself and then for his family.

Although free, Amanda still suffered discrimination and was to have a very limited education. She became a maid at 13 and was to work as a domestic help until her mid-thirties. She married at the age of 17 and had two children, only one of whom survived into adulthood. Her husband died in the Civil War.

In her early twenties Amanda felt that God had miraculously cured her of a serious illness for a purpose. Shortly afterwards she had a transforming conversion experience. Now a single mother, she married again but sadly her husband, who had misled her over his spiritual ambitions, deserted her. Amanda was left in poverty with three more children, all of whom were to die in infancy.

Increasingly, Amanda became involved in Methodist church circles and became a well-known evangelist, bringing people to trust in Christ, in churches (whether black or white), and at Christian meetings. She was a powerful speaker: nearly six-foot tall with a rich voice, a remarkable singing gift and an exuberant, dynamic and spontaneous manner. Amanda was a preacher who made an impact; where she spoke people were converted, overcome with repentance or touched with a sense of God’s presence.

In 1869, after the death of her last son and her second husband, Amanda felt called to be a full-time missionary. As a freed black slave, a mere ‘washerwoman’ as she was often described, and without education or formal training, she could not obtain any sort of official church position. Instead, for the remainder of her life Amanda was to live by faith, sustained by gifts. She certainly acted by faith, rarely planning anything but instead praying over everything and relying on God to guide her.

Amanda began preaching at special events – ‘camp meetings’ – where large numbers of people gathered for days of church services with an emphasis on conversion and holiness. In 1878 she was invited to cross the Atlantic to speak at the Keswick Convention in England. She soon became a popular speaker at revival meetings throughout Britain. She drew crowds because her preaching reached hearts.

Amanda was invited to go to India, where for 18 months she had considerable success in revival meetings. Instead of returning to the United States, she felt led to visit Africa and spent eight years evangelising and setting up schools and missions in Liberia and Sierra Leone.

When she finally returned to the United States Amanda wrote a long account of her life, with an honest account of her spiritual journey but also an eyewitness account of the problems of racism and sexism faced by a black woman in the nineteenth century.

From 1892 onwards Amanda focused her efforts on helping her own African-American community, in particular by establishing and running an orphanage in Illinois. In her last years, with her health failing, she moved to Florida where she died in 1915 at the age of 78.

Amanda Smith came from the most unpromising background to be extraordinarily used by God for forty years in evangelism and revival across four continents. Her success was due to God’s gifting of her, but she played her part by allowing God to work in her life. Three things strike me about Amanda’s life.

First, she depended upon God. Amanda was a poor woman with limited education working against widespread racial prejudice. Yet those very limitations forced her to rely on God and on his strength. The life of Amanda Smith is a reminder that God does most through those who count themselves least.

Second, she had a desire for God. The nineteenth-century emphasis and enthusiasm for ‘holiness teaching’ is unfashionable today. Amanda made it her priority to seek God and to reflect that knowledge and experience of him in her life. It’s a good priority to make our own.

Third, she demonstrated the grace of God. Amanda was a woman who suffered. She lost four of her five children, lived a life of poverty and was frequently considered a second-class citizen. Yet hers was a life of remarkable graciousness. She never demanded her rights, accused others or complained about the racism she endured. Although she rarely raised discrimination in public – she did an enormous amount of good by building bridges and demolishing barriers between black and white communities.

Amanda Smith achieved much for God in her generation. She sets an example for us in ours.