Christians Are Being Greatly Influenced By The Lawlessness Around Them 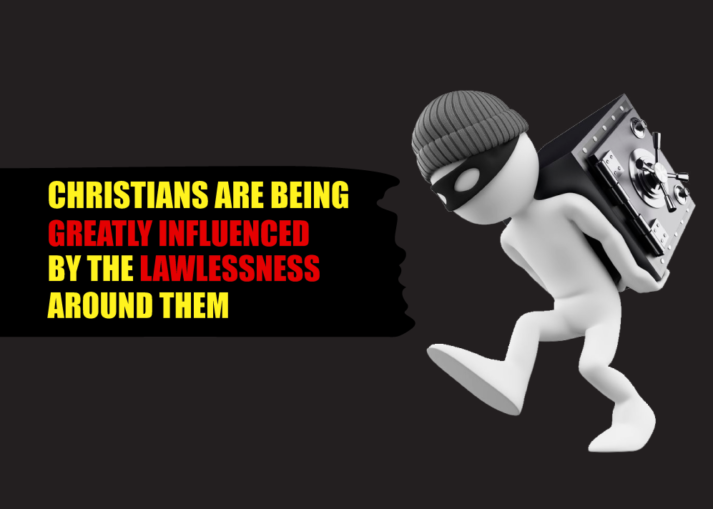 Written by: Philip A Matthews

The Greek word translated “iniquity”, “evil”, or “disregard of God’s law” is “anomia, meaning the condition of being without law, i.e., LAWLESSNESS. In the last days, lawlessness shall “plethuno, i.e., “shall abound” or “shall be multiplied until it takes over society”.

To “wax cold or “grow cold” comes from “psucho”, meaning to breathe, to blow, or to gradually cool by blowing.

The Apostle Paul describes how people will be in the last days:
“But understand this, that in the last days will come (set in) perilous times of great stress and trouble [hard to deal with and hard to bear]. For people will be lovers of self and [utterly] self-centered, lovers of money and aroused by an inordinate [greedy] desire for wealth, proud and arrogant and contemptuous boasters. They will be abusive (blasphemous, scoffing), disobedient to parents, ungrateful, unholy and profane. [They will be] without natural [human] affection (callous and inhuman), relentless (admitting of no truce or appeasement); [they will be] slanderers (false accusers, troublemakers), intemperate and loose in morals and conduct, uncontrolled and fierce, haters of good. [They will be] treacherous [betrayers], rash, [and] inflated with self-conceit. [They will be] lovers of sensual pleasures and vain amusements more than and rather than lovers of God.” – 2 Timothy 3:1-5 (Amplified)

False sense of freedom
The only rule people go by now is “Just let me be free to do whatever I want to do! I have a right to be free to do my thing. You can’t stop me. I’m accountable to no one. Don’t impose your morality on me. Don’t limit me. I’m free!

There is a grave problem with this kind of freedom:
It eventually destroys itself! That’s because the type of freedom that is not governed by morality and strong convictions of right and wrong soon produces unlimited selfishness, and unlimited selfishness causes unlimited evil and all of its dire, destructive consequences. Eventually, this kind of freedom, which is actually license not liberty, collapses upon itself! Truly, as Paul wrote, “You cannot fool God, so don’t make a fool of yourself! You will harvest what you plant. If you follow your selfish desires, you will harvest destruction, but if you follow the Spirit, you will harvest eternal life.” –Galatians 6:7-8. That is an unbreakable, inescapable law of the universe:

You reap what you sow.

This Increasing, Widespread Immorality & Evil In The World Is Definitely Going To Have A Huge, Chilling Effect On Those Who Call Themselves Christians:
Most of them are going to lose their love for God & His way under the pressures of lawlessness. That’s what the scripture said, what Jesus prophesied! Why?

This is because:
When we take away all the rules, the vast majority of people start doing whatever selfish, evil things they feel like doing. This creates overwhelming pressure on those who keep trying to do right and millions of them quit doing what is right because of fear.

With NO moral laws, NO accountability, and LOTS of PRESSURE against doing what’s right, those who want to do right ONLY do the right because they LOVE GOD.

“He that endures keeps himself shall be saved” – Matthew 24:13

The kernel of truth here is this:
If you keep yourself under the Holy Spirit and live your daily life under the word of God (i.e., obey God’s spiritual convictions and know and follow His word), then you will endure the days ahead and you will be saved!

But, if you take every opportunity that an atmosphere of lawlessness gives you to indulge your fleshly desires and start doing and thinking what everybody else is doing and thinking, then you will be lost! You might think that this is highly unlikely, but statistics show plainly that the average Christian is radically changing.

According to a recent state of dating report from ChristianMingle.com, the largest Christian online dating site, only 13 percent of respondents said that they would not have sex before marriage. And, only 13 percent said that they would move in together only after marriage. All of the rest would have sex or move in together for various reasons (various excuses) before they were married.

According to surveys by Proven Men, 35% of married Christian men had sex with someone else while married (31% for born-again Christian men). Over one-half (56%) of men having had one affair will end up having more than three affairs.

Most Christians (52%), say eternal life is not exclusively for those who accept Christ as their saviour. This disregards Jesus’ declaration, “I Am the Way, the Truth, and the Life: No one comes to the Father except through Me.” – John 14:6.

What Is A Biblical Worldview?
A Biblical worldview, as defined by the Barna study, is believing that absolute moral truth exists; the Bible is completely accurate in all of the principles it teaches; satan is considered to be a real being or force, not merely symbolic; a person cannot earn their way into Heaven by trying to be good or do good works; Jesus Christ lived a sinless life on earth; and God is the all-knowing, all-powerful creator of the world who still rules the universe today. Only 19% of born-again Christians believe all of the above.

Breaking down Barna’s surveys into several interesting individual stats:
Only 32% of adults who were born-again said they believe in moral absolutes. Only 9% of born-again teens believe in moral absolutes! So what do they believe? They believe that right and wrong are always relative to the person and their situation, depending on the circumstances. Thus, it may be okay to lie in certain situations, to steal under certain circumstances, to have sex outside of marriage under certain conditions, and so forth. They reject the idea that certain behaviours are wrong at all times for all people under all circumstances. Instead of accepting and obeying what the Bible teaches as moral absolutes, they make most of their decisions about right and wrong based on whatever feels right or comfortable in a situation, whatever will make the most people happy or benefitted, whatever will keep themselves from being ridiculed by other people, and other similar relativistic reasons

Barna also has found that 40% of Christians strongly agreed that satan is not a living being, but a symbol of evil! Similarly, 38% strongly agreed and 20% agreed somewhat that the Holy Spirit is a symbol of God’s power or presence, but is not a living entity. In other words, a significantly large portion of Christianity doesn’t believe that the Holy Spirit and satan actually exist! And over one-fourth (27%) did not agree that the Bible is accurate in all of the principles it teaches.

Because they knew this day would come, the apostles warned:
“Don’t let the world around you squeeze you into its mould.” – Romans 12:2, Living Bible

“Do not be overcome by evil, but overcome evil with good.” – Romans 12:21, ESV“It is absolutely clear that God has called you to a free life. Just make sure that you don’t use this freedom as an excuse to do whatever you want to do and destroy your freedom. Rather, use your freedom to serve one another in love; that’s how freedom grows.” – Galatians 5:13, MSG

“Live like free people, but don’t use your freedom as an excuse to do evil. Live as those who are serving God.” – 1 Peter 2:16, ERV

“The time is coming when people won’t listen to sound teaching. Instead, they will look for teachers who will please them by telling them only what they are itching to hear.” – 2 Timothy 4:3, CEV

“You are the world’s seasoning, to make it tolerable. If you lose your flavour, what will happen to the world? And you yourselves will be thrown out and trampled underfoot as worthless.” – Matthew 5:13, Living Bible

CONCLUSION:
As time moves on towards the end, the pressures, intolerance, and persecution directed towards those who want to remain true to God will dramatically increase.

It will become extremely difficult to remain true to Biblical standards when the whole world, even most of the Christian world, has let down and joined in with the god of this world.

When you live in a world where you are free to do whatever you like, the only way you can keep your faith is to STAY UNDER strong convictions. If you don’t have strong, GOD-GIVEN convictions, then you are in DEEP TROUBLE! If you don’t know what the Bible teaches, you are in trouble already!

Where LAWLESSNESS and iniquity abounds, the LOVE that most Christians have for God will grow cold and disappear, allowing them to fit in with the rest of society and relieve the pressure. Folks, this is happening now! Make sure that you endure!