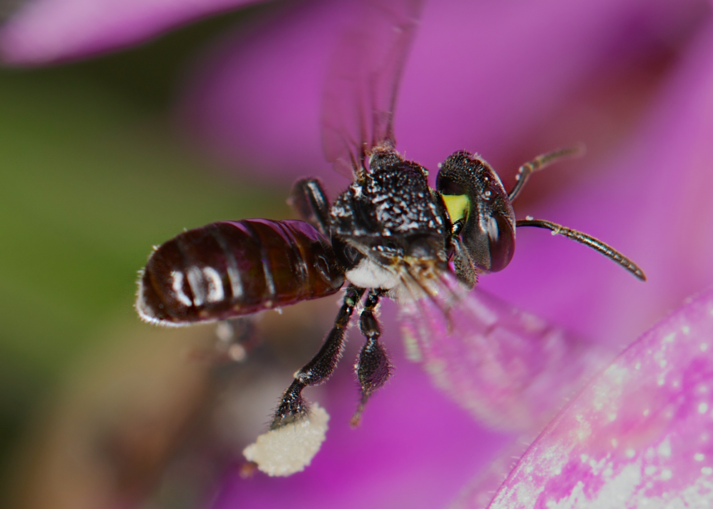 Small, stingless bees of the species Tetragonula carbonaria, from Southeast Asia and Australia, are known to build nests with brood combs having the most ‘bee-autiful’, three-dimensional spiral shapes. These complex structures consist of four basic designs, stacked in 10–20 layers per nest: 1) bullseye-targets, 2) spirals, 3) double spirals, and 4) disordered terraces. Worker bees have been observed to construct new cells located at the edges of each expanding comb. The queen bee then lays an egg in each cell, which is provisioned with honey before it is closed, then the whole process is repeated. The results are some of the most complex designs for honeycombs known in the bee ‘kingdom’.

Scientists studying these beehive structures have recently tried to explain what is going on. However, these clever researchers have allowed their evolutionary presuppositions to lead them to unwarranted conclusions about how these busy bees construct their beehives.

Comparing honeycombs to crystals
The analogy they chose is that of crystal growth, which is a well understood process. Crystals form when molecules cluster together according to their inherent properties (including positively and negatively charged parts of the molecules). These form ordered, repeating lattice structures, which grow outward from a growing point. There can be more than one growing point, or nucleation site, which form growth fronts of the crystal. Each molecular unit then builds on the next, like bricks in a wall. Depending on the chemical nature of each unit, and random forces at play, different, ordered shapes will result.

This all happens in what is termed an ‘excitable medium’, in which forces are jostling, freely moving molecular units. These come together via electrostatic attraction, to form larger, more complex units. These continue to grow, until the medium is used up, the energy of the system decreases sufficiently, or there is no more room to grow.

Researchers have modelled these crystal growth systems mathematically to show how complex shapes can form over time due to small, simple variations. It has been observed that crystal growth looks very similar to the beehive structures seen in the nests of T. carbonaria. And because these beehives ‘look’ like crystals, the scientists explain them in terms of crystal growth. (Note, however, that growth of pretty crystals does not prove that biological organization can arise spontaneously).

Not so simple
However, the ‘fly in the ointment’, or ‘bee in the honey’ for this argument is that bees are not like simple crystal units. Rather, they are like architects who build in a manner that superficially resembles the growth of crystals. The researchers showed how the bees follow ‘simple’ geometric rules, like that which governs crystal growth. The scientists found that the bees followed a ‘rudimentary’ algorithm: when a new brood-cell is required, 1) it is constructed at the comb growth front, 2) and placed slightly higher than its neighbours. Alternatively, 3) a new cell is built on top of an older cell, on the condition that it is on the same level as other cells in the nest. What results are constructions of complex shapes. They likened the bees to an excitable media, jostling around using up the raw materials.

However, the mathematics describing these ‘simple’ systems are themselves far from simple—judging by the researchers’ equations and computer code needed to generate similar growth patterns in their computer models. Furthermore, the ‘simplicity’ ends there. Unlike crystal growth, much information processing is required for a bee to produce and position wax-material at the right place and at the right time, to form cells of the specific size and shape in the correct location. The researchers admit:

“…bee behaviour is determined by something: pressure measurements, chemical measurements or dimension/flatness measurements. Bees sense something in their environment, make some sort of computations and then do something… honeybees seem to use their body parts for measuring distances when building the comb…” (my emphases).

The question is, how exactly do these bees behave in their beehive? Obviously the bees are doing something, but what, and how do they decide? Crystals don’t do any of this. Rather, complex information processing systems are required to follow and interpret rules, enabling the bees to perform their complex, specified tasks. And yet, all this amazing processing goes on in a tiny brain, no bigger than a pinhead!

“It is then possible to hypothesize that, during the radiation [diversification from a supposed ancestor] of the genus Tetragonula, the genetic changes through evolution have led to the parameters affecting our model… so that they produce different patterns of comb building…”

Evolution is a false belief that anything is possible given enough time. However, it is far better ‘to hypothesize that’ the comb building behaviour of Tetragonula bees was programmed into their DNA by their Creator—but the researchers don’t even consider that possibility. Instead they say:

Another science writer offered this speculation:
“It may be unwise to attempt to explain the adaptive significance of why this form may have evolved… Perhaps, it is just the outcome of some random behavior or perhaps it is adaptive.”4

That’s a lot of empty, evolutionary speculation. Although the researchers have discovered and brilliantly described the mathematical rules the bees follow, it is insufficient to account for the bees’ physical ability to produce complex hive structures. Bees cannot be reduced in their behaviour to crystals and molecular forces. What is required is all the staggering processing power and biological engineering that was mentioned earlier. The inference to the best explanation is that the bees are designed to do what they do—and what they do, they do well.

Conclusion
The researchers rightly conclude that bees are not working from some ‘master plan’, rather an internal, localized plan, and they are also affected by what their neighbours are doing. But that doesn’t explain how each bee or its neighbour knows what to do and how to respond. That requires an amazing complex of pre-programed genetic information—plus processing power (of the bee’s tiny brain) and specified, complex machinery in the bee’s body to carry out the instructions written in its genes. Darwinian evolution has yet to explain any of this. Rather, what is required is a Master Programmer and Engineer to put it all together. Only the Bible explains that! Creation required a Creator and the amazing bee-behaviour of these busy bees building their beautiful beehives is further testament to that fact.