5 Godly Attitudes To Bring Into Your Workplace 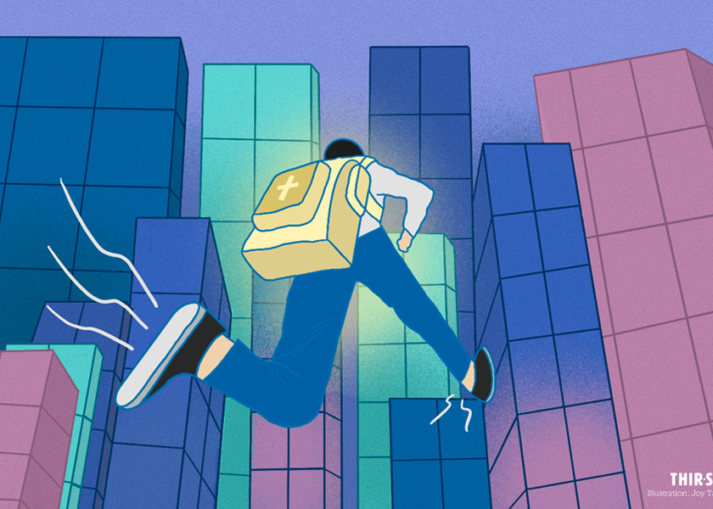 “God, please give me a job that I would be happy to wake up to every morning for 40 years.”

This was my genuine prayer right before graduating from university. While all my batchmates were sharing about attending job interviews and signing job offers even before graduating, there I was, unsure of which career I would pursue.

However, I was sure that God had called me to Himself and just as He had been faithful before, I knew that He would continue to lead me into a career that would glorify Him. I prayed and asked God which path to take, and He spoke in a rather unexpected way.

In my final year of university, my campus ministry friend challenged me to read the Bible in a year alongside him.

And as I was facing my post-graduation crossroads, scared of “getting it wrong” and “screwing up God’s plan” for my life, what stood out to me from the Bible reading were the stories of these five people who demonstrated godly work attitudes.

1. Joseph: Be Faithful In The Small And Big Things
The account of Joseph who was sold into slavery as a naïve teenager, wrongfully accused of a crime, then thrown into prison, before finally entrusted with a huge responsibility — 13 years after God had showed him his future — is well-known (Genesis 37-50).

One of the many lessons I took from Joseph’s attitude toward work is to be faithful where I am, even if it looks rather far from where I feel I should be.

Wherever he was placed, Joseph chose to listen to God as well as to the needs of those around him, even in prison (see Genesis 40).

And this became useful when he was eventually promoted to second-in-command of Egypt, where he used what God had revealed to him to save the world from famine.

Joseph did not despise his humble beginnings — and so when he was eventually tasked to be responsible with much (Psalm 105:19), he could do so faithfully for the benefit of many others.

Reflection: Do you feel like you’re a misfit in your workplace? Could it be that God is preparing you where you are for something greater — here or elsewhere?

How can you still remain faithful where He has placed you even if it’s not where you’d like to be? Take your dreams and doubts to the Lord.

2. Nehemiah: Seek God’S Wisdom To Overcome Challenges
Nehemiah faced great opposition for doing what he knew was right — rebuilding the walls of Jerusalem. His enemies questioned the Jews’ building skills and even made death threats against them (Nehemiah 4:2, 8, 11).

However, instead of stopping work out of discouragement, Nehemiah prayed to the Lord and put half his men to stand guard while the other half continued the repair work.

Meanwhile, even the workers who were focusing on rebuilding the wall also held a weapon in their other hand (Nehemiah 4:16-18).

When the wall was completed after just 52 days, the enemies of God’s people trembled and realised that the work had been done with God’s help (6:16).

Nehemiah committed his team’s daily work to God, and applied both spiritual and physical defences (i.e., prayer and weapons respectively). And the Lord blessed them with the results that only He could achieve.

Reflection: Are you facing opposition at work for what you know is right in God’s eyes? Pray for those opposing you, and pray for wisdom as to which spiritual defences to employ and how to press on with God’s encouragement.

3. Daniel: Stand Firm In God And Serve With Integrity
Daniel was a minority exile living in a pagan-worshipping nation, but he did not let the hostile environment he was placed in shake his faith.

Rather, Daniel continued practising his faith by keeping to God’s laws even for his daily diet (Daniel 1:8) and praying three times a day when this was outlawed (Daniel 6:10).

Notably, Daniel’s work attitude must have been impeccable, as Scripture recorded that even his enemies knew “he was trustworthy and neither corrupt nor negligent” (Daniel 6:4).

This integrity and devotion to God was consistent throughout his entire career, as he served in the courts of at least three kings (Nebuchadnezzar, Belteshazzar and Darius) and was called upon by each of them for his wisdom.

This eventually led each pagan king to acknowledge the Lord’s presence and power through Daniel.

Reflection: Are you in a setting where you feel your faith might be frowned upon? Pray that you will stand firm and not compromise to worldly standards, but continue to work for the eyes of God. Commit to act with integrity and to do good in everything, that you may be blameless before men.

4. Tabitha: Use What You Have To Fill The Needs Around You
Tabitha’s life is often overlooked in the New Testament. She was a faithful disciple in Joppa whom Peter met, and her life legacy is captured in this line: “she was always doing good and helping the poor” (Acts 9:36).

Tabitha ministered to the believing widows, many of whom were in need.

Acts 9:39 records that Tabitha was greatly missed upon her sudden death, with some of the widows she had helped going to Peter for help and showing him the articles of clothing Tabitha had made while she was alive.

Evidently, Tabitha’s work and life had made a significant personal impact upon those she ministered to.

Reflection: What will your legacy be when your work on earth is finished? What are some spiritual or physical needs you see around you at work, church or home? How can your daily duties contribute to filling those needs?

Pray for compassion and courage so that you can step up and out in faith and help meet these immediate needs.

5. Jesus: Walk In Humility And Look For Opportunities To Draw Others To God
No example is greater than our Lord Jesus’s when it comes to a perfect work ethic and working for eternal significance.

Jesus came to our sin-ravaged earth not with a high and mighty attitude but with a heart of humility. He came not to be served but to serve (Mark 10:45) and lay down His life so that we could be reconciled to God (John 14:6).

I recently listened to a podcast where the speaker shared Eugene Peterson’s observation about how Jesus was never in a hurry, but patiently allowed Himself to be “interrupted” (e.g. to heal a bleeding woman en route to Jarius’ house, see Luke 8:40-48).

The truth is, He was never truly interrupted, because He knew when and how to meet people’s needs, and in doing so, He blessed them with the good news that He embodied.

Reflection: Are you willing to be inconvenienced for the sake of ministering to someone else? How might the Holy Spirit enable you to exercise humility and patience in what you do, to help further the gospel?

Pray for those around you to come to know God, and ask God to help you see how you can be part of His redemptive work wherever you are by being his Gospel messenger!

Joseph, Nehemiah, Daniel, Tabitha and most importantly, Jesus — these were all people God used to build His kingdom as they faithfully worked where He placed them.

Certainly, their work attitudes have given me examples to emulate as I go to work every day, and helped me select a career that serves a pressing need in society while also allowing for healthy boundaries (e.g., working certain hours/days only so that I could also continue evening and weekly ministry work, and having annual leave days allotted for ministry events and mission trips).

God has indeed been faithful as I continue to learn how to work for His glory.

Every day at work — especially in a caring profession — I am surrounded with opportunities to listen to and address needs, bless others with what I have, stand up for what is right and serve with wisdom and humility for God’s glory.

As I’ve done so, He’s given me His strength to persevere and rise above challenges and observe how God is working in my workplace, so I can partner with Him by caring for and representing team members as we undergo seasons of transition, and availing myself to meet and encourage colleagues as they navigate significant life issues.

A lot has happened since my desperate pre-graduation prayer — but I can testify today that God indeed has answered me and continues to shape me as His daughter and as His servant in my workplace.

After one teaching role, a master’s degree and four years of working as a speech therapist, I can say that God has indeed been faithful as I continue to learn how to work for His glory.