The Star Of Bethlehem – From An Astronomer’s Perspective 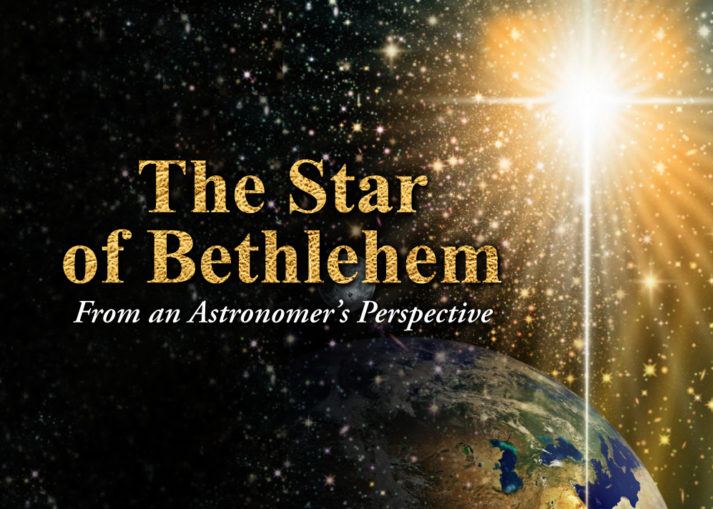 The story of scholars from the east, following the Christmas Star, seeking to find the King of the Jews, has been told countless numbers of times. It is a story filled with awe, wonder, and intrigue, as the scriptures do not give astronomers much information about what the Christmas Star may have been.

The first truth before us is that Jesus was a young Jewish child, aged approximately two years, when the scholars (wise men) from the east found Him in the arms of Mary his mother, in a house – not a manger.

The Gospel of Matthew gives us rich insight here:
“They entered the house and saw the child in the arms of Mary, his mother. Overcome, they kneeled and worshipped him. Then they opened their luggage and presented gifts: gold, frankincense, myrrh.” – Matthew 2:11, MSG
The words “house” and “child” are not confined to modern Biblical translations, but can be traced directly to the monumental translation of the New Testament into English (circa 1534) by the martyr, William Tyndale.

Further evidence proving Jesus’ age
Further evidence that Jesus was a young child, aged approximately two, comes from the actions of Herod. Herod was enraged, as we read in Matthew 2:16-18: “Herod, when he realised that the scholars had tricked him, flew into a rage. He commanded the murder of every little boy two years old and under who lived in Bethlehem and its surrounding hills. (He determined that age from information he’d gotten from the scholars).”
Once again, it is poignantly clear that Jesus was approximately two years old when the wise men visited Him from the east. Such is the age of the Child as estimated by Herod.

Let us begin by briefly discussing comets
The sighting of a bright comet in the sky is a never-to-be-forgotten experience. I will always remember when I was younger, as a high school student interested in photography, waking up one morning at 4am in Krugersdorp to photograph a much-publicised comet, discovered by the South African astronomer Jack Bennett from Pretoria.

What are comets?
Comets are ‘dirty snowballs’ – an amalgamation of rock, dust, ice, and frozen carbon dioxide, carbon monoxide, methane, and ammonia. As comets approach the sun, the snowball partially begins to melt, creating the most exquisite tails of gas and dust. Possibly the most famous comet in history is Comet Halley, which faithfully returns to our environs approximately every seventy-six years. Its most recent return was in 1985/1986.

The grandeur of a comet
Comets can truly rivet public attention, as some of them truly sprawl across our skies. For example, in 1910 Comet Halley was especially close to the earth and, thanks to expansive newspaper coverage, its appearance was eagerly anticipated by the general public. In fact, the earth’s orbit carried it through the end of the comet’s 40-million-km-long tail for six hours on May 19 1910, earning the story the day’s banner headline in The New York Times. Imagine seeing a comet whose tail spanned 6 full moons in breadth and which almost covered about one-half of the entire night sky: estimations are roughly ninety degrees, or 180 full moons.

The Star was not a comet
While historical records show that Chinese astronomers observed Halley’s comet in 240 BC and possibly even as early as 467 B.C., the Star of Bethlehem was not a comet. Firstly, a bright comet would have been seen by everyone, including Herod. Secondly, the dates are out of phase: Comet Halley appeared in 12 BC, several years before the birth of Jesus (Many Biblical scholars assume a date between 6 BC and 4 BC as to the date when the word became flesh and tabernacled amongst us).

Let us never forget the miracle of Christmas, where God became Man.

Was it a Nova?
The suggestions of ‘novae’ (new stars) or ‘supernovae’ (exploding stars) in our night skies are, at first sight, appealing as scientific explanations of the Star of Bethlehem. A nova (plural novae) is a transient astronomical event that causes the sudden appearance of a bright, apparently ‘new’ star. All observed novae involve gas falling onto a dense white dwarf star. Gas whirling onto a white dwarf star may have violent consequences. In the case of a nova, ejecta of gas to velocities as high as several thousand kilometres per second are possible, with a concurrent rise in luminosity from a few times as bright as the sun to 50 000-100 000 times as bright as the sun – hence the name, ‘new star’.

What about a Supernova?
Supernovae are even more spectacular. These exploding stars may temporarily shine as bright as 10 billion suns. One of the most famous supernovae is the Crab Nebula in the constellation of Taurus – also known technically as Messier 1. That exploding star could be seen during broad daylight in the year 1054 AD! At the heart of the Crab Nebula lies a super-dense neutron star, spinning around on its axis thirty times every second. One teaspoonful of matter at the heart of a supernova – the neutron star – may weigh one billion tonnes. The most recent supernova in our own Milky Way galaxy to have been observed with the naked eye occurred in the year 1604.

Jesus’ entire life – from His birth to His death – was a miracle.

Planetary hypothesis
I have always found the planetary hypothesis concerning a physical explanation of the Star of Bethlehem by the legendary astronomer Johannes Kepler (December 27, 1571 – November 15, 1630), particularly appealing. Kepler was a German astronomer, mathematician, and a key figure in the 17th-century scientific revolution, best known for his laws of the motion of the planets and as well as for his masterful books Astronomia nova, Harmonices Mundi, and Epitome Astronomiae Copernicanae. From the world of the big to the world of the small, Kepler’s genius into the geometry of one snowflake, falling from heaven, is classic.

A magical sight
Astronomers use the term “conjunction” to describe an apparent “meeting” or passing of two or more celestial bodies. In December 1603, Kepler observed a conjunction of the planets Jupiter and Saturn – and it must truly have been a magical sight. Two very conspicuous planets in close proximity in the sky is breathtaking indeed.
We know that any pair of superior planets (that is, planets outside the earth’s orbit, such as Jupiter and Saturn) may not only give rise to a single pass, but to a triple pass whereby the planets “meet” and separate three times over a period of a few months. In technical terms, a triple conjunction.

Whatever the Star might have been, the central message is clear.

A potential explanation
In seeking to understand what the “star” of Bethlehem might have been, Kepler calculated that a conjunction of Jupiter and Saturn would have occurred in the constellation of Pisces in 7 BC. But there is more! In fact, the 7 BC conjunction was indeed a triple conjunction. Perhaps it took the trained eyes of scholars to absorb the true cognizance of a triple planetary conjunction of Jupiter and Saturn; while such an event would have indeed been seen with the naked eye, it could certainly have escaped the attention of Herod.
The following year, there was a conjunction of Mars with Saturn, in the constellation of Pisces. This was followed by another conjunction, in the constellation of Aries. The use of the word star (in the singular) in Matthew’s Gospel may strike a discordant note, but allow me to remind readers that these visual descriptions occurred centuries before the perfection of the telescope by Galileo in 1609.

Mysteries do, however, persist
A triple planetary conjunction would not be directional, meaning the planets would not lead one to any specific locale, such as Jerusalem, for example. Neither would a nova be directional. Some people may go as far as claiming that the Star of Bethlehem is fictional, but that is not science, rather scientism. Scientism, as we extensively discuss in our new book God And Galileo, is merely atheism masquerading under the mantle of science.

Allow yourself to be led by the Holy Spirit, just as the Wise Men were.

I look up. To the Via Lactea or Milky Way. To those starry vaults, where silence reigns.

DAVID BLOCK is the only scientist on the continent of Africa whose research has twice been featured on the cover of “NATURE” – the world’s most prestigious scientific journal.