The Remarkable Language Of DNA 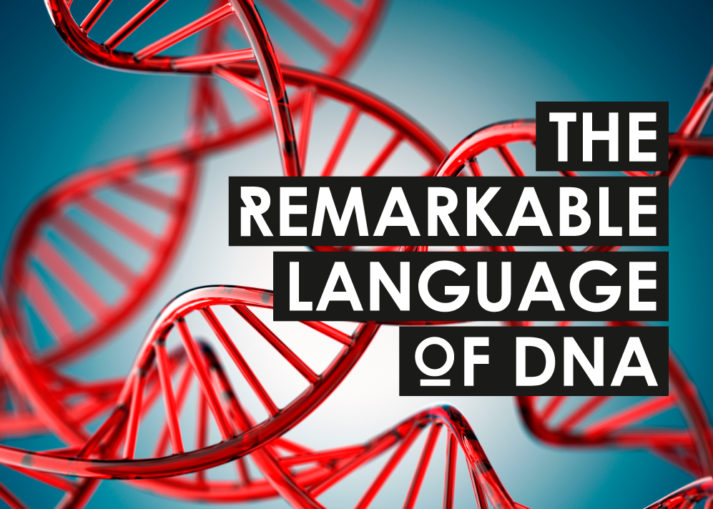 According to leading atheist Professor Richard Dawkins, the most compelling evidence for evolution is found in DNA. In his book, The Greatest Show on Earth, he states that the DNA code (that is, the DNA language) is the same in all life forms—a fact, he claims, that “shows more clearly than anything else that all living creatures are descended from a single ancestor.” This statement, however, is very misleading, as there are a number of exceptions to this ‘fact’—some creatures use a variation of the code. Moreover, these exceptions, along with the nature of the code itself, actually provide one of the strongest arguments against evolution.

The importance of DNA
DNA is found in every cell of our bodies (in at least some stage of its development) and has a beautiful appearance, having the shape of a spiral staircase. The steps (or rungs) are like letters in our alphabet and, ascending or descending the staircase, the letters taken together spell words that have meanings. Altogether, there are around three billion letters in human DNA, which amounts to a lot of information—about a thousand books the size of the Bible. For example, it contains the information needed to grow a baby from a fertilised egg—how to build the heart, lungs, brain, and so on. As adults, we need DNA too – as it stores the ‘software’ that controls much of what goes on inside us.

There are many characteristics of DNA that makes it very sophisticated.

Functions of DNA
One of the functions of DNA is to control the manufacture of the many proteins needed to maintain a healthy body. The protein haemoglobin in our blood, for example, must be very carefully constructed so that it can efficiently transport oxygen from the lungs to various parts of the body. Some proteins act as antibodies, enabling us to fight off illnesses caused by bacteria and viruses. The nails on our fingers, like our hair, are made up of the protein keratin. Although there are hundreds of thousands of different proteins, they’re all made from the same building blocks called amino acids. In humans (as in most organisms), just twenty different types of amino acids are used, linked together in chains. A typical protein is made up of several hundred amino acids. By choosing which amino acids are placed in which positions along the chain, different proteins can be made, each having very different functions.

Simplifying science
The sequence of DNA ‘letters’ is like a language, where different combinations of letters have different meanings. Whereas the English alphabet has twenty-six letters, the DNA alphabet has just four: A, C, T, and G. Using these four letters, the DNA specifies which amino acid is to be placed in which position along the chain. For example, in the DNA language, the ‘word’ comprising the three letters, CAT, means ‘use the amino acid histidine’; the letters GGT mean ‘use the amino acid glycine’; the letters GTG mean ‘use the amino acid valine’. A series of such ‘words’ specifies the sequence in which the amino acids must be assembled. So CATGGTGTG means ‘assemble using histidine first, then glycine then valine’.

Given that there are millions of possible DNA codes, those who argue that natural selection optimised the code must believe in nature performing miracles.

The genius of DNA
There are many characteristics of the DNA code that make it very sophisticated. One of these is the way it accommodates copying errors. Just as, when using a piece of software, a computer copies data from the hard drive to the memory, so DNA must be copied before being used (The copy is actually in a slightly different molecule called RNA). Copying errors occur, which can result in amino acids being assembled to the wrong positions in the chain. However, the DNA language has been configured so as to minimise the effect of such errors. For example, the design of the code is such that, even if the error results in the selection of an incorrect amino acid, the one selected will often have similar characteristics and so will work as well or almost as well as the correct one. In other cases, an error will still result in the correct amino acid being selected.

Our DNA is optimised
Human languages such as English, French, and Latin use differing codes, meaning that they use different combinations of letters to represent the same things. In English, ‘man’s best friend’ is called dog, in French chien and in Latin canis. Similarly, the DNA language could have used any one of many different codes, where different sets of letters could specify different amino acids. This is because there’s nothing about the chemistry of the DNA letters, or the machinery that reads and interprets them, that requires that a certain code be used. In fact, there are millions of possible alternative codes, and some would be better than others in minimising the effect of copying errors. What is so remarkable about our DNA language is that the code it uses is particularly good at compensating for errors. In other words, it is an optimised design. In fact, some researchers have suggested that, of all the possible codes, the standard DNA code (used by the vast majority of organisms) may well be the very best.

Can evolution produce such a code?
Some evolutionists claim that natural selection can explain how the DNA language became optimised. They say that over millions of years, mutations would have produced changes to the code and, each time this gave rise to an improved code, ‘survival of the fittest’ would have resulted in this becoming the new code. The idea that mutations could produce a new workable code, however, is absurd. It would be like changing the position of some of the keys on a computer keyboard. Without a simultaneous change in the software that associates the keys with the letters, numerous words would then be misspelt. This led the co-discoverer of the DNA structure, Francis Crick, to argue that, once in place, the DNA code would be frozen as it would be very difficult if not impossible to change.

These beautiful and highly sophisticated biological systems point to a Creator.

Difficulties in the DNA concept
Interestingly, Professor Richard Dawkins is aware of these difficulties. In his book, The Greatest Show on Earth, he wrote,
“Any mutation in the genetic code . . . would have an instantly catastrophic effect, not just in one place but throughout the whole organism. If any word . . . changed its meaning, so that it came to specify a different amino acid, just about every protein in the body would instantaneously change . . . Unlike an ordinary mutation, which might, say, slightly lengthen a leg, shorten a wing, or darken an eye, a change in the genetic code would change everything at once, all over the body, and this would spell disaster.”

Nature performing miracles
Given that there are millions of possible codes, those who argue that natural selection optimised the code must believe in nature performing miracles. The only way this could have worked is if, again and again, multiple mutations simultaneously changed much of the DNA all at once and, at the same time, changed the way the machinery used to make the proteins interpreted the new code. Moreover, since virtually all organisms throughout nature use the same code, this optimisation process must have occurred very early on in the evolution story, thus severely limiting the time available for all these miracles to happen.

The God who made us was meticulous, down to the fine details of tiny DNA molecules.

Dawkins’ confusion
Despite Dawkins’ earlier statement that the DNA code is universal across all organisms, later in his book he acknowledges that there are, in fact, some exceptions. However, he regards these as insignificant, being “too minor” to undermine his argument. But they are anything but insignificant: as we have seen, evolution theory has great difficulties explaining how variations in the code could have arisen. And how does Dawkins explain the optimised nature of the code? He doesn’t mention it!

DNA points to Christ
According to evolutionists, natural processes somehow caused ordinary chemicals to come together so as to produce DNA and all the machinery needed to read it and manufacture complex proteins. Nobody has even shown such a thing to be possible, but scientists who say they don’t believe this often face considerable hostility. Similarly, those who openly question the ability of Darwinian processes to optimise the DNA code risk opposition and discrimination. Why is this? According to the Bible, the answer is that these beautiful and highly sophisticated biological systems point to a Creator, whom many desperately do not want to acknowledge (Romans 1:20-28.)

God is into the details
In Psalm 139:14, King David wrote, “I am fearfully and wonderfully made”, and this is surely true. The God who made us was meticulous, down to the fine details of the tiny DNA molecules and protein manufacturing machinery in our cells. He designed the system, assigned an optimal code, and programmed the first groups of living things. Moreover, that this code is used by virtually all creatures, makes clear that life came from just one designer as the Bible teaches.

DOMINIC STATHAM is a writer for Creation.com. His qualifications include B.Sc., D.I.S., M.I.E.T., C.Eng. For more info visit www.creation.com