The Devil Hates The Ten Commandments 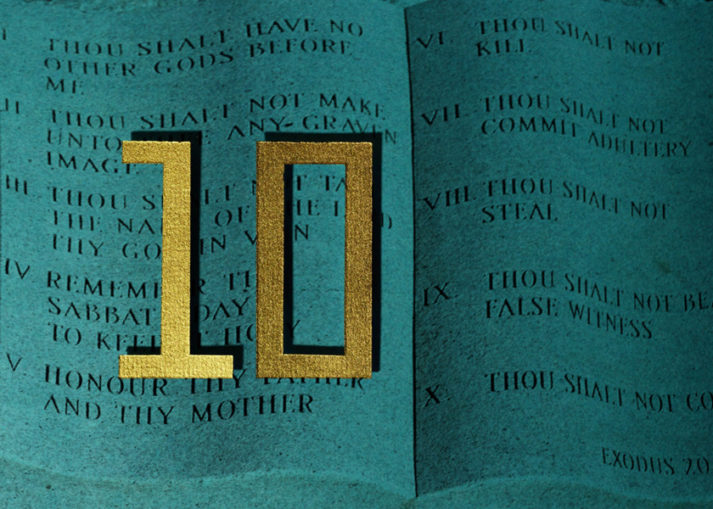 How would you answer the question, “How many ways are there to Heaven?” If you are a Christian, you will no doubt be quick to say that there is only one way to Heaven…and you would be wrong. The correct answer is that there are two ways, according to Jesus. In Matthew 19:17, when a young man asked Him how he could obtain everlasting life, Jesus told him that he would live if he kept God’s Law.

So, according to Jesus, if you want to make it to Heaven, keep the Law. All it requires is moral perfection. You simply have to be perfect in thought, word, and deed. If you sin even once, the Law will condemn you, and you will not enter Heaven (James 2:10). If you as much as lust, you commit adultery in your heart (Matthew 5:27-28). If you hate your brother, you are a murderer (1 John 3:15). Are you perfect? You say, “Of course not. Nobody’s perfect.” Then you had better find another way to Heaven because the Law will see to it that justice is done…and you go to Hell. Like the woman caught in the act of adultery, it is waiting to fall upon you like ten great rocks of God’s wrath. Your only avenue of escape is to do what the condemned woman did and fling yourself at the feet of the Savior. You have no alternative if you want to live. If the Law of God is allowed to do its job, it will drive you to the cross. That’s its function: to act as a schoolmaster to bring us to Christ (Galatians 3:24).

“The devil hates God’s Law because of what it does. That’s why there is such a concerted effort to rid America of the restrictions of the Ten Commandments.”

Revisiting the Ten Commandments
The devil hates God’s Law because of what it does. That’s why there is such a concerted effort to rid America of the restrictions of the Ten Commandments (God’s Moral Law). However, every church in America should take up a collection and send it to the headquarters of the American Civil Liberties Union as a token of appreciation for what they have done for us as a nation.

The Church couldn’t have done a better job if we had embarked on a multimillion-dollar advertising campaign. Not only were the Ten Commandments on television, but they were also the subject of articles all over the Internet and in hundreds of newspapers, letters to the editor, talk shows, radio news, and magazines.

“We must thrust the Ten Commandments at the feet of an idolatrous and sinful nation and show them that they have broken the Law into a thousand pieces.”

The Same Old Story
While many Christians saw the removal of the Ten Commandments monument from the Alabama courthouse as something negative and depressing, it was actually very positive and exciting. The ACLU did our “groundwork” for us. If you study Scripture, you will see that there is a pattern to Israel’s history. They would stray from God’s Law, become idolatrous, and then give themselves to sin. God would send a prophet to remind them of the Ten Commandments and warn of God’s judgment. Israel would be humbled and turn back to the Lord.

Our country has strayed from God’s Law. Like Israel, we have become idolatrous. Our “image” of God has been shaped into nothing more than a benevolent father figure whom we call on in our time of need. When the need has passed, we put our mute and convenient god back on the shelf…until we need him again.

God is now calling the Church to do the work of His Old Testament prophets. Each of us must learn to “break up the Law” as Moses did when Israel danced naked around the golden calf. We must thrust the Ten Commandments at the feet of an idolatrous and sinful nation and show them that they have broken the Law into a thousand pieces. We need to know how to open up the spiritual nature of each commandment and reveal that God not only requires truth in the inward parts but will also judge the world “in righteousness” by the holy requirements of His Law. When the United States understands the perfection required by God and that “the Law works wrath,” they will see their need to flee to the safety of the Savior.

God’s ways are certainly not the same as ours. The negatives of lions’ dens, pharaohs, fiery furnaces, Red Seas, and depressing antics of anti-Christian organizations become positive and exciting instruments when God decides to fulfill His wonderful purposes through them.