How Do The Pyramids Fit Into True Biblical History? 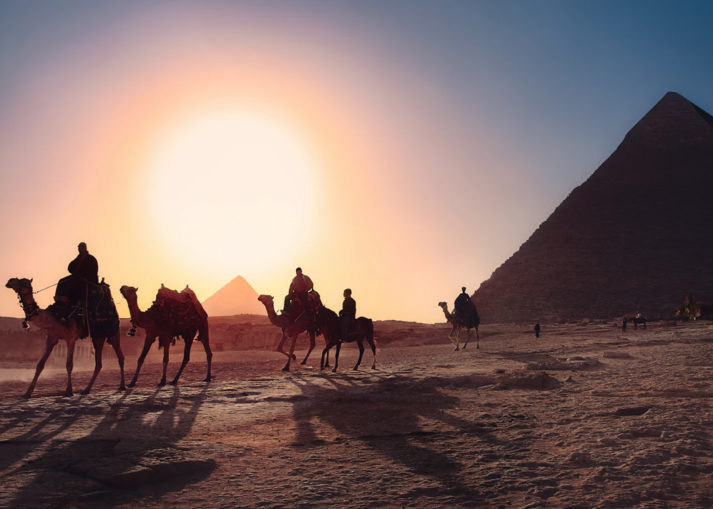 An old Arab proverb states that “man fears time, but time fears the pyramids”. But how old are they really, and how do we fit them into biblical history?

Some of the most famous and ancient buildings of all time were the pyramids of Giza, Egypt. Of the ‘Seven Wonders’ of the ancient world, the Great Pyramid of the Pharoah Khufu (Cheops) is both the oldest ‘wonder’ and the only one that still exists. Another pyramid, not quite as big but still retaining its original limestone casing on the summit, was built by Khufu’s son, Khafre (Chephren). Khafre’s son Menkaure (Mykerinos) built a third main pyramid that’s considerably smaller.

The Giza pyramid complex includes some much smaller pyramids as well as the Great Sphinx, a limestone carving of a mythical creature with a lion’s body and a human head (thought to be Khufu’s).

When were the pyramids built?
In short, pyramids standing on Flood-deposited rock, and built with blocks made of the same, could never have been built before Noah’s Flood.

The Giza pyramids were all built in the Fourth Dynasty, the ‘golden age’ of the Old Kingdom of Egypt. Secular archaeologists date their building between 2589–2504 BC, which allows 85 years for their construction. However, according to the Hebrew Old Testament Masoretic Text (MT) timescale, this date is at or before the Flood. This cannot be possible, because even the pyramids could not have survived the massive upheavals and destructive power of this global cataclysm.

To underscore this, the pyramids themselves are standing on vast layers of sedimentary (water-laid) rock, both sandstone and limestone. In fact, most of the blocks used in constructing the pyramids are of these two types. The limestone contains large numbers of marine fossils such as seashells; like most fossils, these were buried due to this stupendous diluvial activity, with unimaginable quantities of sediment eroded, transported and dumped by the powerful forces of all that water.

In short, pyramids standing on Flood-deposited rock, and built with blocks made of the same, could never have been built before Noah’s Flood. Anything built pre-Flood would have been completely destroyed—and likely without trace, given God’s pronouncement in Genesis 6:7, “I will destroy man whom I have created from the face of the ground.”

According to biblical history, the pyramids must have been built after Babel and the dispersion of humanity (Genesis 11:1–10). Specifically, Scripture connects Noah’s son Ham and his grandson Mizraim with the land of Egypt, who were likely Egypt’s founders.

14C dates—when experts can’t agree
The dates for the pyramids’ construction are based on radiocarbon (14C) dating, but the method, and particularly the assumptions behind the method (which when properly understood is really ‘the creationist’s friend’) should be questioned. The dates were obtained from 14C found in wood, reed and straw left by the pyramid builders. In 1984, dates were obtained by the David H. Koch Pyramids Radiocarbon Project for the Giza pyramids that made the pyramids 374 years older than they expected. Between 1994 and 1995 a second analysis reported “significant discrepancies” from the earlier 1984 study. The theoretical date range varied greatly for samples containing organic material associated with Khufu’s Great Pyramid. These dates were based on the 14C dating method, which obtained a wider-than-predicted range of dates for the various materials tested, namely 400 years. This result was described as “history-unfriendly” in an online report, due to the lack of precision in the calculated results. However, even older (First Dynasty) tombs at Saqqara were dated at 2920–2770 BC, which the project report states is in “agreement” with other studies.

The problem of ‘old carbon’
These dates are well before the Bible’s timescale for the Flood based upon the MT, so since the pyramids must be post-Babel constructions, these dates should be questioned. The 1994–1995 study admitted “problems” with Old Kingdom dating. It stated that the builders used ‘old wood’ and recycled material from previous generations, thus contaminating the project’s carbon analysis results, giving a false older age.

Such use of older material by the pyramid builders as cited in the report may be the case, but 14C still has fundamental assumptions built into the method that, if not addressed, will return ‘inflated’ dates, much older than the Bible’s history will allow.

Radiocarbon dating measures the ratio of radioactive 14C to the stable 12C (14C/12C), which decreases over time. But the all-important question is, what was the starting ratio?

For one thing, the earth’s decreasing magnetic field is generally not taken into account. That is, a stronger field in the past would be a greater shield of cosmic rays that generate 14C from atmospheric nitrogen (14N). So the further back in time, the less 14C would have been produced, hence the starting ratio would have been smaller. The lower amount today in a specimen from that time would be interpreted as a greater age than the real age.

Taking the Flood into account
However, it is the Flood which would have had the major effect on the carbon ratio. This becomes increasingly significant the closer the sample’s true age is to the time of the Flood. This is because the Flood buried huge amounts of 12C in vegetation, but the amount of 14C being produced is unaffected by this. This would significantly increase the post-Flood 14C/12C ratio compared to the pre-Flood times, thus giving an inflated age to any sample from the pre-Flood world.

CMI’s website creation.com has papers documenting 14C tests done on samples of wood and coal (derived from wood) found within rocks laid down by the Flood. Such rocks are claimed to be millions of years old, so the wood and coal should be ‘undatable’, since even after only 100,000 years, there shouldn’t be any detectable radiocarbon left. The wood and coal ‘dates’ are always in the tens of thousands of years, which brings into serious question the entire long-age scheme of geological dating upon which the ‘millions of years’ age is based. At the same time, they are thousands of years ‘older’ than the Bible’s chronology—but since the wood was growing in the pre-Flood atmosphere/biosphere, which had low 14C, we would expect such inflated ‘dates’.

As the earth was progressively revegetated in the centuries after the Flood, the 14C/12C ratio rose too, such that the dates calculated from old samples appear to reduce from tens of thousands of years ‘too old’ (for biblical history) to only thousands of years as the true age of the sample becomes further from (after) the date of the Flood.

So it is not surprising that the Radiocarbon Project reported problems for Old Kingdom dates, and not surprising that all the dates are ‘older’ than biblical history would allow. This is not just because their dates were contaminated by older materials—which themselves were closer to the Flood in time. It is also because these pyramids themselves were built not that long after the Flood, so even contemporaneous materials would date as several thousand years too old for the above reasons.

14C—no threat to Bible history
It is clear that when such factors are taken into account, secular dating for the oldest of Egypt’s pyramids presents no threat to the accuracy of biblical history. The dates offered for these monuments are themselves questioned by the experts who calculate them—which are in turn based upon their worldview, which rejects any notion of the global Flood as a real event in history. In reality, the oldest of Egypt’s pyramids fit comfortably within biblical history and timescale as post-Flood and post-Babel monuments. They were built by the descendants of Noah, through Ham, Mizraim, and their offspring.