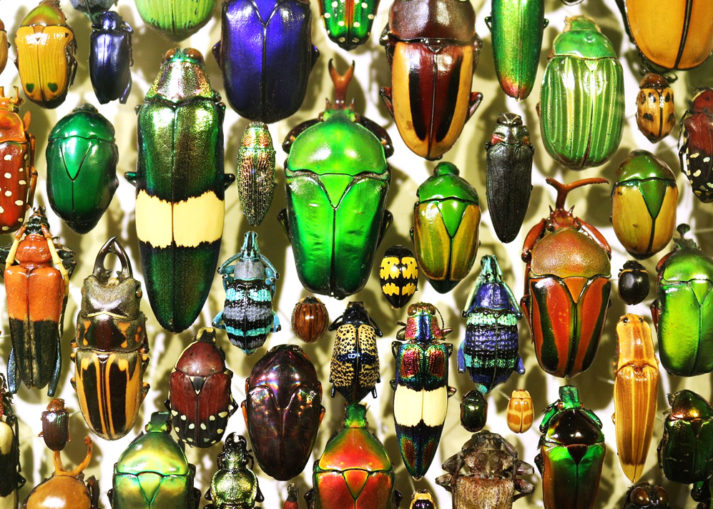 Adapted from Prayer News, CMI-UK/Europe, July 2020.
Animals the world over sport amazing design features that defy evolutionary expectations while testifying to the Creator’s wisdom. Here we will briefly consider two examples that have been reported in scientific journals recently. The first defies evolutionary expectations regarding how genes are inherited and how embryo instructions cause the differentiation of heads from tails. The second describes a newly discovered jumping mechanism in a tiny bug that inspired ideas for a new robotic leg.

Homology is head over heels!
Evolutionary theory by its very nature is plastic—but an idea used to explain everything, ends up explaining nothing at all.

‘Homology’ refers to similarity in body parts of creatures, said to be due to their evolutionary descent from a common ancestor. Darwin’s theory predicts that similar plans, structures and genes are preserved and passed on to new species. However, new evidence has flipped homology head over heels. How does the first cell of a developing embryo determine which end is which? The answer is that genetic information provides instructions for the orienting of the organism (left vs right, front vs back, head vs tail). It has now been discovered that genes used for orienting embryos are not conserved across different species, but are different in even ‘closely related’ species.

A recent study of all sorts of species of flies, by scientists from the University of Chicago, demonstrates how genes with basic roles in early embryo development are able to be quickly chopped and changed without altering a fly’s body-plan and functions. Their recently published paper in eLife states the following:

“With very few exceptions, animals have ‘head’ and ‘tail’ ends that develop when they are an embryo. The genes involved in specifying these ends vary between species and even closely-related animals may use different genes for the same roles.”

In some fruit flies and midges, head and tail are distinguished by the accumulation of gene products at one end of the egg—but the mechanism for doing this in other fly species was unclear. The new study revealed a quite unexpected diversity of front end instructions in species as diverse as moth flies and mosquitoes. Why unexpected? It is because the findings fail to conform to evolutionary expectations. Evolutionists would not have predicted these results because they are contrary to the idea of homology. Something as fundamental as an organism’s orientation should have been fixed much deeper in ‘evolutionary time’, then preserved and inherited. While few will acknowledge it, this paper deals another fatal blow to Darwinian evolution, and flips the theory on its head.

Evolutionary theory by its very nature is a plastic idea—but an idea used to explain everything ends up explaining nothing at all. The research team’s work, while fascinating, surely points to divine design: it takes an unimaginable intelligence to programme an organism’s software to be chopped and changed, and used in different places for different purposes, and in different species. It speaks loudly of a Designer, rather than common descent.

A remarkable new catapult mechanism has been discovered in the hind legs of several species of tiny leaf beetles (Blepharida sp., Longitarsus sp., and Psylliodes sp.), astounding researchers with its power and elegance. This is different from the amazing toothed gear discovered in leaf hoppers. These ‘flea beetles’ display incredible jumping abilities, surpassing those of fleas. A paper in ZooKeys describes this as “ … an extremely effective method to avoid potential predators.”

The jump of one of these ‘bionic beetles’, Longitarsus anchusae, was measured at 289 times its body length! Another species, Psylliodes affinis, experiences g-forces of up to 266g during take-off. Considering that astronauts normally experience a maximum of 3g in a rocket launch and fighter pilots can sustain no more than 9g for more than a few seconds, these diminutive beetles are quite astounding! The science researchers did not explain the beetles’ ability to live life in the fast-lane, apart from offering evolutionary platitudes; for instance, claiming that the jumping ability is “one of the key adaptations” in making them such a diverse group of creatures.

However, they wanted to discover the secret of the beetles’ bounce and used several clever techniques to do so. It turned out that they have a spring mechanism in their hind legs. However, rather than credit the Creator, the researchers claim this evolved as a way of storing elastic potential energy. But how did these beetles avoid being eaten before they evolved this ability to jump? Dead beetles do not pass on their genes to the next generation.

The spring is made of three moving parts attached to muscles, an apparatus that surely qualifies as an ‘irreducibly complex mechanism’: all the component parts have to be present for the system to function. How this evolved step-wise is impossible to conceive, yet it would need to be complete to afford the beetle a survival advantage.

The scientists found the jumping power and acceleration of these beetles especially mind-boggling and, of all known jumping insects, they easily win the gold medal, with silver and bronze going to fleas and leaf hoppers respectively. CMI has often written about scientists taking inspiration from the natural world, mimicking what they observe, in order to derive new engineering solutions. In this case, the researchers were inspired by the mechanism in the beetle legs to propose a robotic limb design (described in a Journal of Creation article). Ironically, their paper mentioned “design” a dozen times—they couldn’t help themselves! Of course, such engineering marvels point to creative brilliance, which is a far cry from a blind, Darwinian, evolutionary processes.

Summing up the science
Such engineering marvels point to creative brilliance, which is a far cry from blind evolutionary processes.

We have looked at two divine designs that deny evolution: the genetic instructions for orienting an embryo and the incredible bounce of a ‘bionic’ beetle. The research scientists rightly applaud the wonderful designs they uncover, but sadly fail to applaud the Creator. God rightfully deserves glory. The more scientists delve deeper into creatures’ anatomy, physiology and behaviour, the more they discover things that defy Darwinian evolution (unguided, accidental, step-by-tiny-step, incremental changes). Moreover, these same scientists unwittingly uncover amazing evidence of our Creator God’s superlative designs!

If only people had the (spiritual) eyes to see things for what they are. Christians must pray that people will recognise God’s Creation and give Him due glory. The Creator has expressed His glory in His Creation in innumerable ways, and Scripture rightly declares: “For his invisible attributes, namely, his eternal power and divine nature, have been clearly perceived, ever since the creation of the world, in the things that have been made. So they are without excuse” (Romans 1:20).

While people continue to be fed the false idea that the brilliant designs in the natural world resulted from unguided natural processes, CMI will continue providing doubt-busting, faith-fuelling, God-honouring information to our readers. We have seen time and again that it can be used effectively, both for the defence of the Scriptures and to really open minds to the truth of the Creator, Jesus Christ and His Creation.