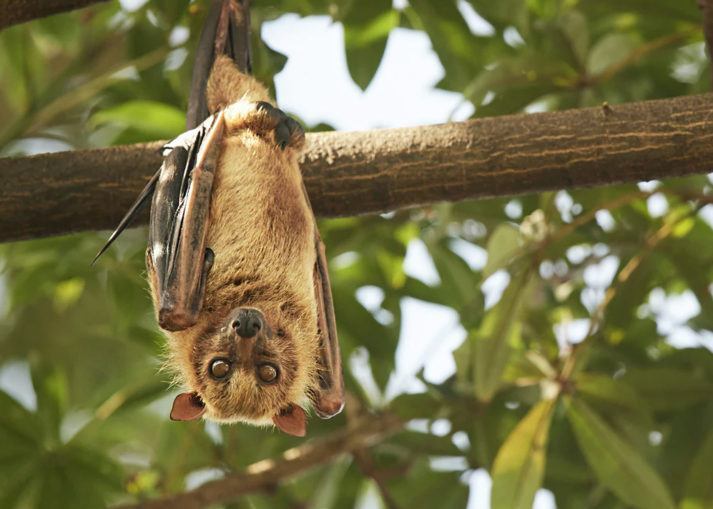 Bats are truly amazing creatures, comprising around one-fifth of all mammal species. They live on every continent except Antarctica. The smallest bat, the so-called ‘bumblebee bat’ is around 30 mm (~1 inch) long, and weighs only 2 g (less than 0.1 oz). Yet others boast a wingspan of up to 1.5 m (5 ft).

Bats play an important  ecological role by spreading pollen and seeds and keeping insect pests under control. However, they can also negatively affect other animals, and even humans, by spreading viruses.

There are two main groups of bats: megabats (Megachiroptera, also known as fruit bats or flying foxes) and microbats (Microchiroptera).

Microbats (see fig. 1) are more diverse than megabats, with 700 species. They are typically insect eaters, but are also known to feed on fruits, fish, nectar, and blood. These bats all use echolocation when flying, so they have large ears to capture the sound waves they emit.

There are 170 species of megabats. They roost in groups in trees and have long snouts and teeth for grinding fruits, which make up most of their diet (see fig. 2). With the exception of one genus, they move around by sight and smell, and not echolocation. 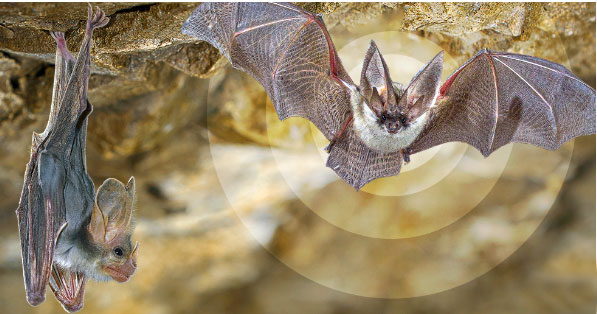 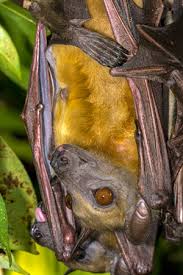 Many people think of bats in general as terrifying, blood-sucking animals. However, only three species of bats actually drink blood, and only one of them (the common vampire bat, Desmodus rotundus) feeds off mammals. While many bats have sharp carnivore-like teeth, most eat either fruit or insects as the majority portion of their diet (see fig. 3).

Would bats have eaten insects in the pre-Fall world of Eden? In the Hebrew Bible, higher animals as well as humans are called nephesh chayyah, often translated as ‘living creatures’ (nephesh = soul in Hebrew). Nephesh creatures appear to be capable of suffering pain and anguish.This is not so for insects, which are never called that in Scripture. So if they are not nephesh life, bats could have eaten insects pre-Fall.

The fact that a few bats eat blood and small mammals is a result of the Fall. However, the large number of fruit- and pollen-eating bats is a vestige of the “very good” creation (Genesis 1:31). Before the Fall, all land animals, including the flying creatures, were given plants for food (Genesis 1:30). 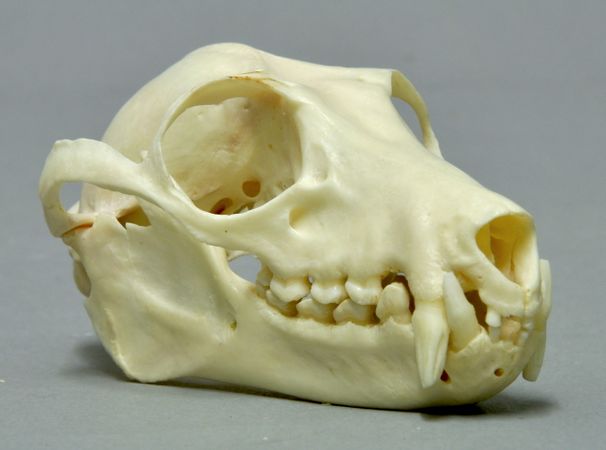 Echolocation
Microbats and one genus of megabats (Rousettus) use echolocation during flight. That means they emit sounds and map their location (and that of their prey) based on the echoes that they hear. The sound bats use is often beyond the range of human hearing, i.e. ultrasound. The intensity of bat sounds ranges from 60 to 140 decibels, where 60 decibels is the strength of normal conversation, and 140 decibels is more than an aircraft carrier deck in full operation!

Most microbats echolocate by producing high frequency sounds in their larynx (voicebox), and they modify the call as it is emitted through the mouth. Those from the family Phyllostomidae emit sound through their noses as well; they have a fleshy appendage around and above their nostrils called a ‘nasal leaf’ which modifies and directs the call.

Rousettus species, the only group of megabats to echolocate, use their tongues to emit pairs of clicks, like those of dolphins. 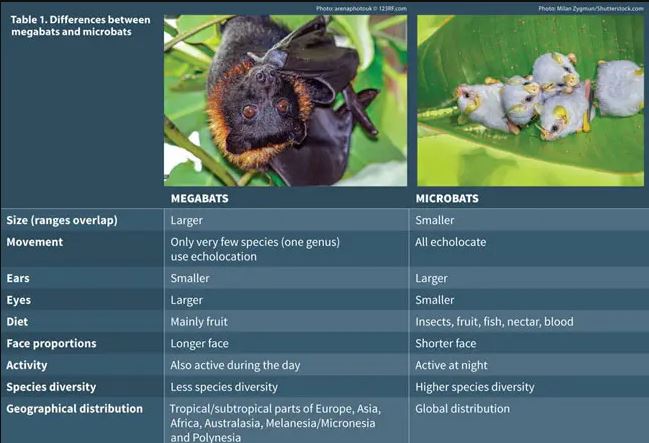 Protecting hearing
There are two main ways microbats echolocate. Some species emit short calls, and then measure the time between the call and the echo. These bats’ ears are designed in such a way that the middle ear muscles contract when the bat is ‘calling’, so that it doesn’t deafen itself. The muscles then relax so that the bat can hear the resulting echo. This echo does not damage the bat’s hearing, because it is of lesser intensity than the emitted call—just as a dropped ball will not bounce as high as the point from where it was released.

Other microbat species echolocate by emitting continuous calls, measuring the Doppler shift in the returning sound (the change in pitch as a noise-emitting object moves to or from a listener). The bat’s hearing is unharmed, as the call is emitted at a frequency which is outside of its very finely tuned hearing range. But as the call bounces off a target, it changes its frequency, enabling the bat to detect the echo—which is now also weaker, so will not damage the animal’s hearing.

The energy of the clicks emitted by the Rousettus megabats is much lower (by about a factor of 10) than that of the calls emitted by microbats, so the intensity of the sound presents no risk of hearing damage.

Call variation
The call of intermittently-calling microbats also varies in its length, frequency, and intensity from one microbat family to another, depending on the usual environment for that family of bats. However, sometimes the same variety of call is used by differing bat groups.

Bats are sensitive to the sounds of insects such as moths, crickets, and centipedes. A species of moth, called the tiger moth (Bertholdia trigona), can confuse the echolocation system of bats. These moths have a hearing organ which causes the moth’s flight muscles to move unevenly, thereby making it hard for the bat to catch the moth. Other moths use tail appendages that confuse the bats’ echolocation.

The way bats produce and process sound during echolocation clearly speaks of God’s wonderful design. No random mutations could possibly create such a complicated sound system. Engineers copied the echolocation system of bats for underwater echolocation—called sonar, as used in submarines. If intelligent humans copied such a complicated system when designing sonar, what kind of intelligence would have been responsible for creating bats, which are much more complex than anything human beings have made? Obviously, a supernatural Creator. 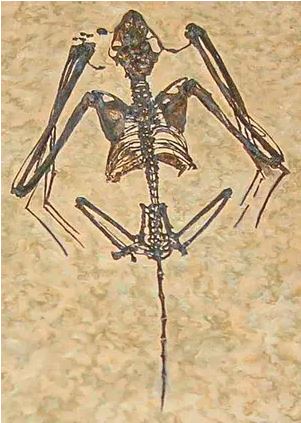 The most characteristic feature of bats is their membranous wings, stretched out between their lengthy finger bones. Multiple, long finger joints provide for the flexibility required for high lift, low drag, and high maneuverability. Bats are the only flying mammals, and fly just as well as birds.

Traditionally, because of the great similarity in the structures used for flying, evolutionists have believed that microbats and megabats must have descended from the same common ancestor, which had already evolved flight. But in the last few decades, mainly due to genetic evidence, a competing hypothesis is that each group evolved flight independently, and that their flight structures (though very different from birds’) are virtually identical to these is pure happenstance. Note that evolutionists would otherwise regard such identical features as homologies, and use them as ‘proof’ that they had a common ancestor!

Not surprisingly, then, there is still some resistance to this idea; for one thing, it would mean another amazing coincidence. It would require that the minority of megabats that echolocate must have (also separately) just happened to evolve a way to use echoes to locate, as the microbats do, albeit differently.

The fact that bats don’t resemble any other mammal group makes it hard for evolutionists to place them in the evolutionary tree of life. Some evolutionists even claim that the closest relatives of bats are carnivores and horses, based on DNA studies. No ‘missing links’ (transitional forms) have been found between bats and non-bats. Fossil bats look much the same as modern ones, without any signs of evolution. The earliest bat fossil shows that they look the same as their modern forms (see fig. 4). Bats are examples of living fossils, which means that there is hardly any difference between their living and supposedly long-extinct forms. Bats have always been bats ever since Day Five of Creation Week.

Does the Bible wrongly call bats ‘birds’?
Some people point to Leviticus 11:13–19 and Deuteronomy 14:11–18 in an attempt to show that the Bible is unscientific. These verses list bats among several ‘bird’ species, such as the eagle or the vulture. We need to realize that in places the Bible chooses to classify organisms differently to how modern science does, but this does not make it any less accurate or applicable.

Genesis 1:21 describes the living things that were created on Day Five of Creation Week, including what are translated as ‘winged birds’ (KJV ‘winged fowl’). The Hebrew word translated ‘birds’ is ôph, which means ‘flyers’ or ‘flying creatures’. Since bats obviously have wings and fly, grouping both them and birds together under the Hebrew label ‘winged flying creatures’ is completely accurate and appropriate.

Summary and conclusion
Bats are very complex creatures which speak of design. They are unrelated to any other animal group because of their unique body plan. Many bats eat pollen and fruits, which is what the Bible indicates was the original diet of animals before the Fall. Bats cause problems for evolutionary theory; how much simpler it is to accept what God says about these animals in His Word!