Are We Called To Be Liberal Or Conservative Christians? 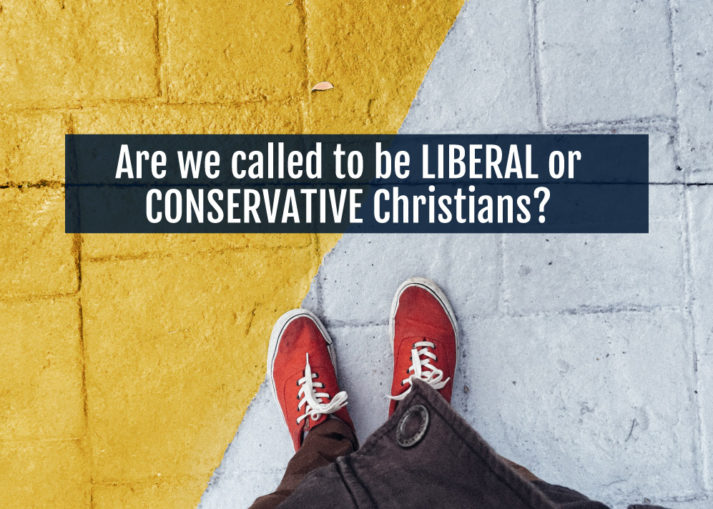 In the run up to the 2020 USA elections, I became increasingly puzzled by terminologies that started bombarding the internet. The Body of Yahshua was divided into “Conservative” and “Liberal” Christian camps. I tried to search the scriptures to get biblical justification to support these terminologies and failed to find any. What I found, instead, was the opposite. Galatians 3:27-29 says “For as many of you as were baptised into Christ have put on Christ. There is neither Jew nor Greek, there is neither slave nor free, there is neither male nor female; for you are all one in Christ Jesus. And if you are Christ’s, then you are Abraham’s seed, and heirs according to the promise.”

We are to be one in Him
My understanding of this scripture is that we are to be one in Christ and get our identity from Him, not from our earthly tribes, ethnicities, social statuses, or biological genders. In the same breath, we should not get our identity from the political parties we support, but from Yahshua Himself. We must be careful of entertaining worldly labels that are unbiblical and provide fodder for division. Mark 3:24 and Matthew 12:25 tell us that a kingdom divided against itself cannot stand.

Called as Sons of God
None of us are called to be conservative or liberal Christians. We are called as sons and daughters of God to exercise stewardship over our Father’s estate. If we read Psalm 24:1 we know that the whole earth belongs to God, our Father, including every nation and every inhabitant. As Believers, therefore, the earth is our Father’s estate and our mandate as His children is to manage that estate in line with His Kingdom principles. Any believer who does not understand this essential truth will struggle to fulfil their Kingdom and ordained purpose.

Our mandate is clear
The mandate given to God’s children is clear cut, unequivocal, and unambiguous. From Genesis 1:26-28, the mandate given is to exercise dominion, subdue, and take authority. It continues in the New Testament in Luke 19:13 to occupy and do business until He comes, and in Matthew 5:13-14 with a clear charge to be Salt and Light. The defining essence of Salt is that it controls flavour and determines taste. A key defining component of Light lies in its ability to push back darkness. You cannot be either Salt or Light and play an indifferent role or be a backbencher. We must step out of our comfort zones to “Go” and impact Jerusalem, Judaea, Samaria, and the uttermost parts of the world in line with Acts 1:8.

Be salty
In Matthew 5:13 it says salt that has lost its flavour should be thrown away. May the Body of Yahshua release its saltiness in this season!

Radical sons of God united in Him
Ke Nako, let the Body of Christ rise up to take nations by the hands in line with Isaiah 51:17-19. Let us not allow ourselves to be labelled with worldly terms – such as “conservative” or “liberal” – that only serve to divide us further. Our power lies in our unity. According to Genesis 11:6, unity is what makes us immovable and unstoppable. Unity, according to Psalm 133, is where the anointing (oil) is released and the blessings of God are commanded.

Division in the Body of Christ helps the devil
Let us not allow differences of political beliefs to divide us and take our eyes off the Kingdom goals and targets. The enemy’s mandate is to steal, kill, and destroy. To allow division in the Body of Yahshua and amongst the sons of God is to help the devil in this mandate and goal. May we be One in Yahshua Hamashiach and reject unbiblical Christian tags.

Dr Pearl Kupe is an attorney and an international consultant to world leaders and international organisations. She is the international president of the Global Forum for Women Entrepreneurs. Email pearl.kupe@gmail.com or follow her Facebook page, Kingdom Transformer Pearl Kupe.