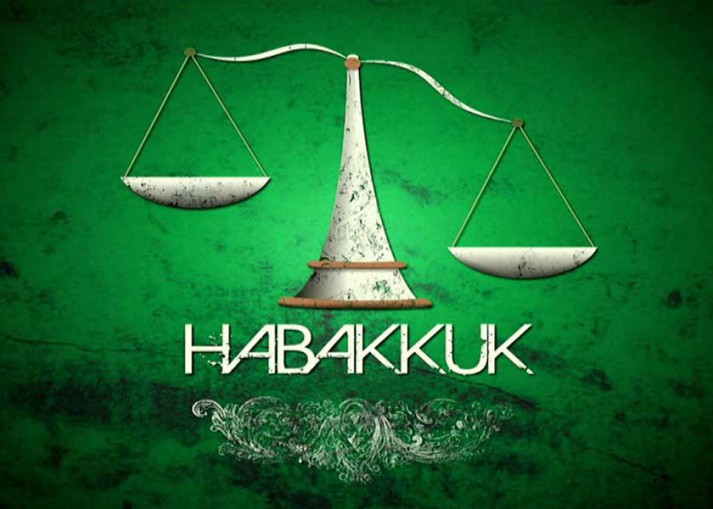 Habakkuk is of great relevance to us today. It deals with difficult questions:
• Why do the innocent suffer?
• Why do the guilty go free?
• Why doesn’t God punish the wicked?

Who was Habakkuk?
Habakkuk means ‘one who embraces’, it is a wrestling term. Habakkuk worked in the Temple in Jerusalem. He was a contemporary of Jeremiah, Ezekiel, Daniel and Zephaniah.

Interrogatory prayer
The book of Habakkuk is set in dialogue form (as is Job). Habakkuk believed in interrogatory prayer. Intercessory prayer is when we ask God for things. Interrogatory payer is when we ask God questions. Habakkuk had trouble reconciling his faith in a good, righteous, just and all-powerful God with the prevalent wickedness in Jerusalem. He was troubled with an eternal: “Why?”
• Why does a Holy God allow terrible crimes to go unchecked?
• Why do the wicked prosper?
• Why does the Lord seem to be silent in times of disaster?

The structure of Habakkuk
• Chapter 1: Grappling with the problems of wickedness
• Chapter 2: Grasping the significance of God’s Judgement
• Chapter 3: Glorying in God’s Sovereignty.

Why do wicked nations prevail?
Habakkuk is astounded and dismayed by God’s terrifying judgement. But the Babylonians seem even worse than the Assyrians! Habakkuk was burdened with his backslidden people and broken world, he knew that God must judge evil, but how could a Holy Lord use such a wicked nation as the Chaldeans to judge the nation like Judah, which was not nearly as bad as they who “continue to slay nations without pity” (1:17).

Write the vision and warn the people
Habakkuk declares that he will go up to the watchtower and stand on the ramparts to await the answer of the Lord “to see what He will say to me, and what I will answer when I am corrected” (2:1). The Lord responds, commanding Habakkuk to: “write the vision and make it plain on tablets…” (2:2). God tells Habakkuk that he needs to go down into the streets and write what the Lord has told him for passers-by to read it. Habakkuk needs to be warning the people.

Five woes on Babylon
God declares five woes upon the Chaldeans:
1. Injustice – plundering nations by extortion, looting the fruits of other people’s labours. “Who increases what is not his.” God hates theft and robbery. Unjust weights and measures are an abomination to Him.
2. Covetousness – “Woe to him who covets evil gain…”, “you give shameful counsel to your house, cutting off many peoples and sin against your soul.” Greed and envy will reap judgement, “because he enlarges his desire as hell and he is like death and cannot be satisfied” (2:5).
3. Bloodshed – “Woe to him who builds a town with bloodshed, who establishes a city by iniquity!”
4. Drunkenness – “Woe to him who gives drink to his neighbour…for the violence done to Lebanon will cover you, and the plunder of beasts which made them afraid, because of men’s blood and the violence of the land and the city, and of all who dwell in it” (2:17). For the destruction of the forests of Lebanon and the mass killing of animals for ivory, tusks and skins, the Lord will call men to account. Drunkenness, debauchery and destruction of God’s forests and creatures will be judged.
5. Idolatry – Those who worship man-made idols carved out of wood, stone and metal are ignoring the one true God. Idolatry is the most condemned sin in the Bible.
“But the Lord is in His Holy Temple, let all the earth keep silence before Him.” Hab 2:20

Covered with God’s glory
Babylon’s glory will be covered with shame, because of their drunken debauchery, shameful conduct, ruthless exploitation, plundering of nations, extorting people and destroying the forests and wildlife. God will cover Babylon with shame and utterly destroy them. But “the earth will be filled with the knowledge of the Glory of the Lord, as the waters cover the sea” (2:14).

Wicked doomed, righteous flourish
The Chaldeans, drunk with the blood of nations they have plundered, shall, in time, be destroyed. Yet God’s people will flourish and the glory of the Lord will fill the earth. The wicked are doomed. However, for God’s people, there is a glorious future. What man means for evil, God can use for good.

Ask tough questions
Habakkuk confirms that yes, we live in a fallen world. However, it is not wrong to ask difficult questions of God. It is good to think through our Faith and face up to the difficult questions. Although we may not always understand what the Lord is doing behind the scenes, we can be absolutely confident in His eternal purposes. We may not understand God’s will, but we can trust it!

Injustice demands judgement
Much of man’s wickedness fails to receive justice on earth, in this life. However, the problem of suffering points us beyond this life to the next. There is a Day of Judgement coming. The Eternal Creator, our Eternal Judge, will call all to account and will put all things right at the end.

Celebrate God’s justice and power
The third chapter is a prophesy set to music. Habakkuk 3 ends with a hymn of praise and trust in the Lord. The glory and brightness of God’s light is celebrated. His power is recognised – even in pestilences, fevers, afflictions, in His anger and wrath. The weapons of God are recognised in His bow and arrows, in His chariots of Salvation, His spears, earthquakes, floods and the whirlwind.

Confidence in our Creator
“Though the fig tree may not blossom, nor fruit be on the vine; though the labour of the olive may fail and the fields yield no food; though the flock may be cut off from the fold, and there be no herd in the stalls – yet I will rejoice in the Lord, I will joy in the God of my Salvation. The Lord God is my strength; He will make my feet like deer’s feet, and He will make me walk on my high hills” Hab 3:17- 19. Joy is a choice in spite of our circumstances.

Even if everything that was normal and predictable collapses, the prophet will still rejoice in God, for who He is, not only for what He does. Even on precipitous mountain heights we can trust God to make our feet as sure footed as a deer. The fear of the Lord is the beginning of wisdom. The Lord imparts strength, skill and steadfastness to His servants.

Hebrews quotes Habakkuk
“Now the just shall live by faith; but if anyone draws back, My soul has no pleasure in him. But we are not of those who draw back to perdition, but of those who believe to the saving of the soul” Heb 10:36-39.

When did Habakkuk minister
Habakkuk prophesied during the final days of the Assyrian Empire and at the beginning of the rise of Babylon. Habakkuk had lived through the reforms of king Josiah (2 Kings 22, 23), who had abolished many of the idolatrous practices of his father, Amon, and grandfather, Manasseh (2 Kings 21:11-22). The Empire of Assyria had fallen, just as Nahum had prophesied. Egypt and Babylon were contending for dominance. In 605 B.C., the good king Josiah had been killed at the battle of Carchemish. The burden of Habakkuk was published during the early years of the reign of King Jehoiakim (609-598 B.C.). It was a time of increasing moral and spiritual deterioration in Judah. The evil reign of Jehoiakim was a sad contrast to the days before him, under his father, King Josiah (Jer 22-26).

Grappling with grievous evil
Habakkuk was confused and bewildered. He had lived during the days of the great Reformation under King Josiah. He had seen the evil empire of Assyria collapse. But now he was seeing the rise of another wicked power, Babylon. The world seemed to be in upheaval. Violence was abounding. Lawlessness was prevalent. God’s people were being oppressed. Blatant idolatry was replacing the worship of the one true God. “The law is powerless, and justice never goes forth. For the wicked surround the righteous; therefore perverse judgement proceeds” (1:4).

A terrifying judgement
God responds to the prophet Habakkuk: “Look among the nations and watch – be utterly astounded! For I will work a work in your days, which you will not believe, though it were told you. For indeed I am raising up the Chaldeans… terrible and dreadful… fierce… they all come for violence” (1:5-9).