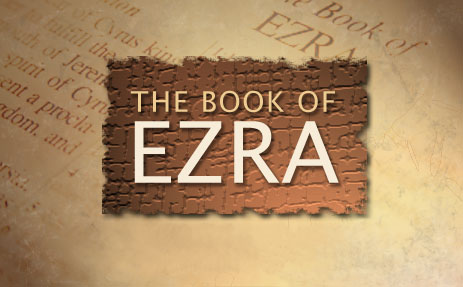 “Ezra came up from Babylon; and he was a skilled scribe in the Law of Moses, which the Lord God of Israel had given. The king granted him his entire request, according to the hand of the Lord His God upon him.” Ezra 7:6

Who was Ezra?
Ezra was a scribe, a descendant of Aaron, the original high priest, through his son Eleazar, and later Phinehas and Zaddock. Ezra was of the tribe of Levi, with a long, unbroken line of priests in his ancestry.

When?
The Book of Ezra was written between 460 and 440 BC.
The first exiles returned to Jerusalem from Babylon 537 BC.
The Temple was rebuilt 516 BC.
Esther became Queen of Persia 479 BC.
Ezra led the second expedition from Babylon 458 BC.
The Book of Ezra covers over 100 years, dealing with the three deportations from the Southern Kingdom of Judah, and the three returns from Babylonian captivity.

The message of Ezra

The second exile involved the two tribes in the Southern Kingdom of Judah, following the fall of Jerusalem to the Babylonians. The main prophets to the Judeans in exile in Babylonia were: Ezekiel and Daniel.

The Babylonian Empire was conquered by the Medo-Persian Empire. No doubt influenced by Daniel, Cyrus, the King of Persia, made a proclamation permitting the Judean exiles in his kingdom to return to Jerusalem (Ezra 1:1-6). Cyrus even financed the return. “Thus says Cyrus king of Persia: All the kingdoms of the earth the Lord God of Heaven has given me. And He has commanded me to build Him a House at Jerusalem, which is in Judah.” Ezra 1:2. At Cyrus call (537BC), 42 360 Judeans return to Jerusalem

The Book of Ezra is the first time that the Bible refers to the Jews. Many mistakenly refer to the Hebrews of Moses time and the Israelites of the time of King David and Solomon as Jews. This is historically inaccurate and Biblically incorrect. Of the 12 Tribes of Israel, only the Judeans are referred to as Jews, and then only after the captivity in Babylon.

Rebuilding
Zerubbabel, the governor and Joshua, the priest, led the people in first building an altar and then rebuilding the Temple in Jerusalem. The place where sin must be dealt with must come first in our life. Our hearts must be right with God, before we come before Him in worship. Just as the altar was at the centre of Temple worship, so the Cross must be at the centre of Christian worship. The primary focus of Ezra is the rebuilding of the Temple, Reformation of society, restoration of Biblical marriages and families and revived worship of the Lord God. But it all starts with a restored altar.

Resistance among the people
As the work of rebuilding the Temple began, resistance amongst the nearby inhabitants attempted to distract and discourage God’s people. Attempts were made to frustrate their purposes and false accusations were brought against those engaged in the work. When God gives you an important work, expect opposition. “Then the people of the land tried to discourage the people of Judah. They troubled them…” Ezra 4:4

Reinforcements
Sixty years after the Judeans had first returned to Jerusalem, Ezra led a second expedition from Babylon to reinforce the struggling Judeans. Ezra received a commission from King Artaxerxes, to whom Queen Esther was married. Ezra’s contingent journeyed four months (119 days) to reach Jerusalem. There they reinforced and re-inspired the Judeans to restore the Temple. “Whatever is commanded by the God of Heaven, let it diligently be done…also we inform you that it shall not be lawful to impose tax, tribute, or custom on any of the priests…or servants of the House of God.” Ezra 7: 23-24

Restoration
To revitalise Scripture study, Ezra founded the Synagogue worship pattern in each community, setting out a pattern of Bible study followed by worship, which was to become the pattern of the congregations in the early Church. Ezra also edited 1 & 2 Chronicles and wrote some of the Psalms, including the great Psalm 119, celebrating the Law of God.

“Now therefore, do not give your daughters as wives for their sons, nor take their daughters to your sons…that you may be strong and eat the good of the land and leave it as an inheritance to your children forever.” Ezra 9:12

Intermarrying with the heathen nations around them, Ezra describes as “…our great guilt… our iniquities… these abominations…” Ezra 9:13-14

Reformation
Ezra taught the returned exiles the Scriptures, and applied the Law of God to daily life. He reformed the laws of the communities and cleansed the community of mixed marriages. God’s people were to be separate from the world, a special people, dedicated to studying and obeying the Word of God and worshipping the Lord alone. They were to be pure in their marriages and in their worship. Who we marry matters. We have an obligation before Almighty God to only marry according to His will. Marriage is not only a personal choice. Marriage involves two families, the entire community, the nation and the Kingdom of God. God seeks “…godly offspring…” Malachi 2:15

Spiritual revival
Ezra laid the foundations for what Nehemiah would later accomplish in rebuilding the walls of Jerusalem and restoring the community. Ezra was an example of devotion to the study of God’s Word, and in prayer and fasting. Ezra 9 records his leading the people in repentance. He tore his clothes in great distress and grief, trembled in fear and reacted with revulsion to the seriousness of their national sin. He communicated the holiness of God, the seriousness of sin, and what true repentance involves. Repentance involves: conviction, contrition, and conversion. This led to Spiritual Revival. He led the people in a sacred covenant with God and prepared them to be ready for ‘the fullness of the time’ when the Messiah would come to Jerusalem. If God was to come, or call you, today – would you be ready?

Reading the Law
Ezra read the Law publically, from a wooden pulpit, to the whole community of Israel, of all ages assembled. This reading took place at the Feast of Tabernacles, the Harvest Festival. At the reading of the Law, the people were so convicted of their sins, that they broke down and wept confessing their sins to God. At the conclusion of these prayers of repentance and confession, Ezra led the people in renewing their Covenant with Almighty God, dealing with mixed marriages, misappropriated funds, desecrated Sabbaths and neglected duties.

Remnant
Whenever man’s sin leads to disaster and judgement, God preserves a remnant. Noah and his family were the remnant saved from the destruction of the Flood. Lot’s family were the remnant rescued from Sodom and Gomorrah. In the time of the great apostasy of Israel under Ahab and Jezebel, God preserved 7 000 who had not bowed the knee to Baal. The Apostle Paul writes: “I have reserved for Myself 7 000 men who have not bowed the knee to Baal. Even so then, at this present time, there is a remnant according to the election of grace.” Rom 11:5. The Book of Ezra lists the family heads of those who returned from exile. Our ancestry and our family matters.

Restoration
The Book of Ezra is a chronicle of hope and restoration, as God’s people return to Jerusalem and rebuild the Temple, repenting of their sins, rededicating their lives, restoring their marriages and families, reforming their laws and renewing their worship of the Lord. God graciously responds by pouring out Revival blessings upon them.

Haggai
The most prominent prophet during the time of Ezra was Haggai, who called the people to their highest priority of worship. “So the elders of the Jews built, and they prospered through the prophesying of Haggai the prophet…” Ezra 6:14

A Second Exodus
The Book of Ezra records a second exodus as God’s people returned from captivity to the Promised Land. A new beginning for the people of God.

“For Ezra had prepared his heart to seek the Law of the Lord, and to do it and to teach statutes and ordinances in Israel.” Ezra 7:10

Have you fully repented for all sin in your life?
Have you come to the Cross?
Have you returned to the Lord?
Have you prepared your heart?
Do you carefully study the Word of God?
Are you applying the Lordship of Christ to all areas of life?
Is the worship of God central to your life?
Is your marriage God-honouring?
Are you raising Godly children in the love and fear of God?

“The Law of the Lord is perfect, converting the soul…” Psalm 19:7